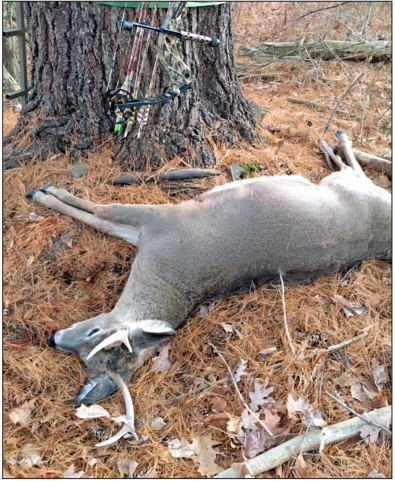 Oak Duke played it safe in a tight hunting spot and used his bow to take this late season buck during the second rut.

Finally! Early November’s late afternoon big moon beamed down like a smile. The rut, an old cranky engine had hiccuped and sputtered a few times, but now it had caught fire and was revving up. Bucks were running does all over, on their feet, day and night.

Text messages were beeping my phone, “It’s on!”

And then…worse. A hurricane named Nicole settled her subtropical remnants over the Northeast, wet and mild as if it washed away the rut.

There is a neck-and-neck horse-race between two feelings I have during that whitetail rut. One is the frustration of time-after-time getting a dandy buck on my trail cam during the day, right under my stand! However, I had chosen poorly and set up shop in the wrong tree, somewhere else. 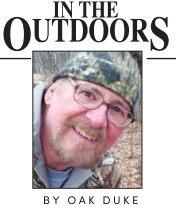 And sure enough, after passing a few bucks, getting choosy, the angst had metastasized into a fair-sized demon behind my belt buckle where bad feelings thrive.

As the rut began to wind down with many bucks settling into lockdown, a new hope, a new belief to hang my bow on began to take root.

“Hey, there is to be a second rut, another chance.”

The second rut was to unfold in early December, and those remaining bucks, those that still had the fire in their bellies to breed, would be on their feet at the end of the regular gun season here in New York State’s Southern Zone.

They would be seeking out those does that were cycling again, after failing to breed back in November in the first go-around. And those doe numbers would be augmented by some first-timers, doe fawns born last May, and late cycling older does that had young fawns and were still nursing in early fall, a hormonal process that slows up their biological clocks.

But things change in a month in the deer woods.

For one thing, whitetails are much spookier, having been hunted hard. Often they tend to gang up in unhuntable properties, often coming out during darkness or nearly so. And of course, many bucks have been taken, especially the foolish, aggressive animals that have stretched their time on the planet by staying out too late in the morning or begin prowling around in the afternoon.

I had noticed a small group of older does, with a few of their fawns moving regularly into a field at dusk as the regular deer season began to draw to a close. So, it was likely, I thought, that bucks would key on this small, localized doe pattern too, just too antsy to wait ‘til dark as the moon waxed toward full again.

And even if none of the does in the field were ready to breed, any respectable buck, and even some less so, and still left on their feet would just have to check them out. Right?

Luckily, the weather was right in early December, mild, with gentle breezes and relatively cooperative thermals.

Instead of opting for the rifle, which I probably should have toted, something made me rationalize, “Nope, it’s tight in there and a bow would be just as good.”

Either my muzzleloader or especially my rifle would give me a better chance. But sometimes you just go with a feeling.

So, with a blaze-orange camo jacket (now required in NYS during regular gun season) I climbed up into the tree stand and settled in well before the sun went down. I didn’t have to wait long. A few does ambled down through the brush, heading for their field. And then the main group of five appeared, moving with confidence downhill too.

And then I heard the sound all bowhunters love most.

A grunt … a tending grunt from a buck!

The shot was good, double-lunged, and he only ran about 40 yards.

Hunting the second rut had paid off this time, with the second main rut spike appearing to hit, same as the first rut flurry back in November, a few days before the full moon.