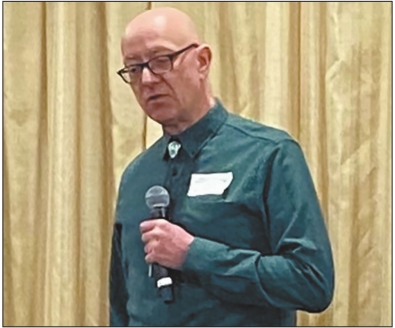 The DNR’s Corey Geving, founder of roughfish.com, spoke at the 2023 Roundtable on Jan. 20 about the array of native fish in the state and the need to better protect them. Photo by Brian Mozey

Bloomington, Minn. — DNR officials say Minnesota is home to 143 native fish – all worthy of the agency’s attention. At the DNR Roundtable on Jan. 20, the department showed attendees an in-depth look at what it may take to keep these fish populations strong.

Leading a session called, “Respecting and protecting Minnesota’s diverse native fish,” was Corey Geving, an IT developer for the DNR and the founder of roughfish.com

Geving said the fish often referred to as “rough fish” help keep the ecosystems of lakes and rivers in Minnesota in balance. He also encouraged people not to kill and dump these fish.

Roughfish have many benefits, Geving said, from being prey species to sportfish to being hosts for freshwater mussels. Further, they may get anglers interested in fishing at a younger age.

“They are an inclusive resource, and they’re available to everyone,” Geving said. “One thing that’s not often recognized is that these native fishes are often available to people who don’t have big boats or big trucks.”

Geving added that the DNR is starting to adds protections for native fish. As of March 1, 2023, there will be a limit of 10 gar for anglers.

Brad Parsons, DNR Fisheries Section manager, said there are a few other fish limits that are being considered. These limits would need to go through the rule-making process, but he’s hoping that by March 1, 2024, some new roughfish limits will go into effect.

Via the rule-making process, the DNR has to make sure limits are legally enforceable with multiple proposals, which will include comment periods for the public to offer suggestions. There are a handful of steps to make a new limit official, but Parsons said there’s a focus on native fish.

Specifically, Parsons said one focus is the burbot (or “eelpout”, American eel, whitefish and cisco (also known as tullibee or lake herring). Friday’s session included discussion about a four-fish limit for burbot, 15 for whitefish and ciscoes, and full protections for the American eel, a “catadromous” fish that spends its life in freshwater rivers but travels to spawn in salt water.

“Which is really ground-breaking,” Geving said. “I mean, it’s great that we’re kind of leading the pack when it comes to this, especially (for) eel and burbot. They’re definitely going to be around for future generations if we protect them.”