CO Ben Huener (Roseau) checked anglers on Lake of the Woods as well as coyote hunters and bobcat trappers around Roseau County.

CO Nicholas Prachar (Blackduck) reports time was spent working angling and snowmobiling activity, as well as assisting with CO Academy snowmobile training. Enforcement action was taken for angling without a license, angling with extra lines, and felony possession of narcotics.

CO Brice Vollbrecht (Bemidji) patrolled area lakes and snowmobile trails. He assisted the Bemidji Police Department with a report of a stolen snowmobile. The machine and suspect were located.

CO Mitch Lawler (Alexandria) spent a lot of time this week on the ice and on area snowmobile trails. Several anglers were issued citations for leaving rattle reels and jig poles down in their houses while they went to shore for dinner. One shelter even had two tip-ups set up right outside a shelter. There was nobody around, and one even tipped up while Lawler was standing there. However, there wasn’t anybody around to reel it in. The owner was located and was cited.

CO Mark Mathy (Cass Lake) continues to work on a background investigation of a CO applicant. Enforcement action was taken for angling, ATVing, and snowmobiling violations.

CO Marc Johnson (Hibbing) primarily worked angling and snowmobiling activity. Minimal angling or spearing success has been seen over the past couple weeks, but the quality of ice on area lakes continues to improve.

CO John
Velsvaag (Ely) checked anglers and snowmobilers this past week. Fishing
was slow, and slush continues to be a problem on many lakes.

Fishing has been alright, and the slush issues seem to be improving.

CO
Kipp Duncan (Duluth) reports area lakes were checked for angling
activity. Duncan also spoke about the job of a conservation officer to a
group of residents at their monthly meeting.

CO
Andrew Ladzinski (Pine River) conducted snowmobile patrols on Upper and
Lower Whitefish Lake. Anglers are reporting a slow bite, with many
perch showing up on their graphs. Snowmobile training was attended at
the U.S. Border Patrol Station in International Falls.

CO
Eric Sullivan (Brainerd) reports deer-hunting violations continue to be
investigated. Contact was made with people who were illegally
harvesting decorative materials from federal forest land.

CO
Stephen Westby (Little Falls) worked area lakes and rivers for angling
and snowmobile activities. Heavy snow has made many of the lakes and
rivers dangerous to travel on because of all the slush and weaker ice.
Please use caution while traveling on the ice.

CO
Caleb Silgjord (Sauk Centre) spent time during the week monitoring
angling activity and patrolling snowmobile trails in the station. An
influx of anglers was seen over the weekend with a modest crappie bite
on Big Sauk Lake. 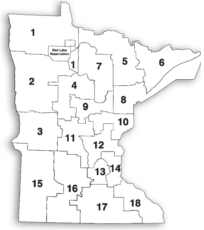 CO
Todd VanderWeyst (Paynesville) worked angling activity in the area and
found ice conditions inconsistent, with a lot of slush on top of the
ice.

CO
Tom Hemker (Winona) received a call about a sighting of a bull moose in
the area. Neither he nor local law enforcement were able to confirm it.
It was seen in an area where a bull elk had been observed by several
people and cameras recently.

CO
Chad Thesing (Albany) followed up on deer-hunting cases from the past
season. Angling success in the area has been slow and slush continues to
be a problem.

CO
Thephong Le (ELCOP) assisted DNR staff with an uncooperative individual
who interfered with staff while work was being done on the agency’s
Eagle Cam.

CO
Garrett Thomas (Eagan) continued to patrol local lakes and snowmobile
trails. Rain and slush are making angling a challenge for most. The
trout lakes, though, are still producing a solid bite. Multiple ongoing
investigations continued.

CO
Scott Arntzen (Forest Lake) spent the week doing fishing and
recreational vehicle enforcement. He dealt with a
nuisance-animal-trapping complaint, fielded calls about accessing lakes
from the road right of way, and worked on open cases.

CO
Luke Gutzwiller (Redwood Falls) spent time this past week working
angling and trapping activity. Commercial inspections were conducted
throughout the week. Investigations of litter were conducted in multiple
counties.

CO Matt
Loftness (Marshall) reports time was also spent checking coyote hunters.
Travel continues to be the main topic of conversation amongst ice
anglers, with areas of slush and deep snow on lakes.

CO
Cassie Block (Willmar) spent time this week checking anglers on area
lakes. After reports of poor ice quality, Block would like to remind
anglers that ice is never 100% safe and to check the ice frequently.

CO
Nicholas Klehr (Litchfield) reports calls keep coming in about thin ice
areas on area lakes and anglers are reminded to check ice conditions
before going out and know that no ice is 100% safe.

CO
Jamie VanThuyne (Mankato) focused on fishing and snowmobiling activity.
VanThuyne also conducted a taxidermy inspection. Area lakes are in poor
condition for travel. Numerous vehicles were stuck on lakes throughout
the week.

CO Jeremy
Henke (Albert Lea) checked anglers and snowmobilers this week. Anglers
are reporting a difficult fish bite with few fish making it above the
ice. Snowmobile riders have found enough snow to keep this interesting,
with weekend traffic pretty heavy in parts of the area.

Anglers are reminded to check ice conditions and pick up their trash.

CO
Brittany Hauser (Red Wing) spent time patrolling area snowmobile trails
for activity. Time was also spent assisting in the removal of vehicles
from the ice in an area where conditions deteriorated, causing multiple
vehicles to break through (See Hunting and Fishing Report on Page 15.)

CO
Tom Hemker (Winona) received a call of a sighting of a bull moose in
the area. Neither he nor local law enforcement were able to confirm it.
It was seen in an area where a bull elk had been observed by several
people and cameras recently.

Natural
Resources Pilot Brad Maas (Brainerd) worked on the moose survey in the
northeastern part of the state. Once again, poor weather grounded many
of the flights. Some plots were completed, but still there are 22
remaining to complete the project. More moose were observed – some bulls
still with antlers and some additional cow-calf pairs.