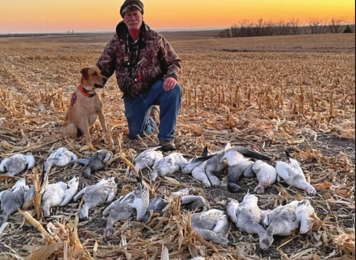 Bill Nutt and his dog, Buckeye, kneel behind a bag limit of snow geese harvested by Nutt and his friends during a fall hunt in Kansas. Photo courtesy Bill Nutt

Kansas snows fit the bill on this day in the field

Have you ever been bird hunting and had a bird walk right up to you and look you in the eye as if to ask, “Hey, what’s going on?” I had never seen anything close to that until this year.

My buddies and I do not use a guide on our waterfowl hunts in Kansas. However, we have been duck hunting there for years. Therefore, we are confident in our ability to freelance and succeed.

On the evening of the third day, Matt and Mike were heading home. They stopped and gave us the windsock bags.

“The four of us shot seven snow geese tonight,” Mike Ford said. “You guys might want to try this if you are staying.”

I had guarded optimism about our chances of harvesting snow geese.

On our fourth day, the other members of my hunting party were too sick to get out of bed. So, my Lab, Buckeye, and I walked outside at about 8 a.m. I noticed several flocks of snows flying north. I ordered the dog in the truck, and we went scouting.

I saw approximately where the birds went down. There were about 10,000 geese in a recently picked cornfield. I called our landlord to see if he knew who owned the field. After being passed from farmer to farmer, I found the right guy.

“Shoot all you want! They destroy our winter wheat fields,” the farmer said. 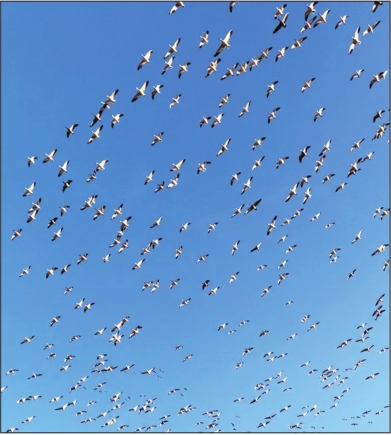 Thousands of snow geese peppered the sky during a Kansas goose hunt for Bill Nutt and his partners. Photo by Bill Nutt

I thanked him and went back for the decoys. There is a limit on snows, 50 per hunter, per day.

I quickly returned to the field with the decoys. I spent the next hour and a half poking holes in the frozen field to set up 160 windsocks in a cigar-like shape. Geese like to fly past the group and be at the head of the class. I made a place at the upwind end of the spread for a dog and hunters, tightly surrounded by decoys. The northwest wind was bitter cold, but my shirt was wet with sweat from all the work. From experience, I knew to wear a moisture-wicking shirt to help keep my skin dry. With no birds in the air, I made a quick trip to our base camp for a dry shirt and a hot cup of coffee.

Steve was out of bed. I told him what I was up to and asked if he would like to join Buckeye and me for a snow goose hunt. He was in. We arrived at the field at 3:45 p.m. and took our positions for the arrival of the white hoard.

At 4 p.m. we heard the first honks of the afternoon.

“In your house, Buckeye!”

He went straight to his blind.

We had practiced this in the backyard, but this was for real.

The geese continued right past us. I sat up and said, “They weren’t buying any of that.” I barely got the words out of my mouth when I saw a cloud moving toward us. It was not a rain cloud.

This is it!” I almost shouted in excitement. The most enormous flock of geese I have ever had fly over me was doing just that. There had to be at least 5,000 birds in this flock.

“Stay, Buckeye, stay.” I calmly reminded my dog what we had practiced in the backyard.

The flock began to break up, and each smaller flock flew independently of the enormous mass of birds. Then, I noticed one group of about 200 geese flew downwind to make another pass. This time they were lower than the 100-yard pass they made the first time.

Another group came in behind them. Both groups turned to my left after passing us and lined up downwind. Before they could coast over our spread, a different bunch came in low from our right. They were lower than either of the aforementioned squadrons. I was calling, but I am not sure they could hear me over the noise. The new group banked as they got to the decoys and lined up just shy of 40 yards.

“Take ’em!” I yelled. Steve and I sat up. I hit the first two birds I shot at. Four geese falling from the sky told me that we were successful.

I was not sure which thing I was congratulated for, but I did not have time to ask.

Buckeye was running full speed from goose to me to goose, making a pile of birds between Steve and myself.

“In your house,” I commanded. He ran inside and was ready to go again.

Another flock was on the way. I quickly loaded my 12-gauge with 3 1⁄2 duplex No. 1 and No. 2 steel shot. We laid down, and I started calling. had to remind Buckeye, “Stay, Buckeye, stay.” One goose coasted over me so low that I could have touched it. The bird landed 5 feet behind me. Two other birds landed by Steve. We did not want to shoot singles with huge flocks locked up coming straight at us. These birds took four passes to commit. They were about 40 yards, hovering, and we both doubled again. I sat up and reached for more ammo. I looked beside me, and a snow goose stared me in the face.

“What do you want?” I asked and laid back down. My attention immediately shifted to my dog. “Fetch ’em up.” By the time I started the word fetch, he was off like a rocket. He added three geese to the pile, but we had another group break off and head right at us and coming in low.

Buckeye picked up the fourth goose. It was still alive. He looked at me for a second and made a dash for the dog blind with the goose still in his mouth. He ran so fast that I thought he would go right through the backside.