Home » Illinois » ICE ’EYES… when the going gets tough

ICE ’EYES… when the going gets tough 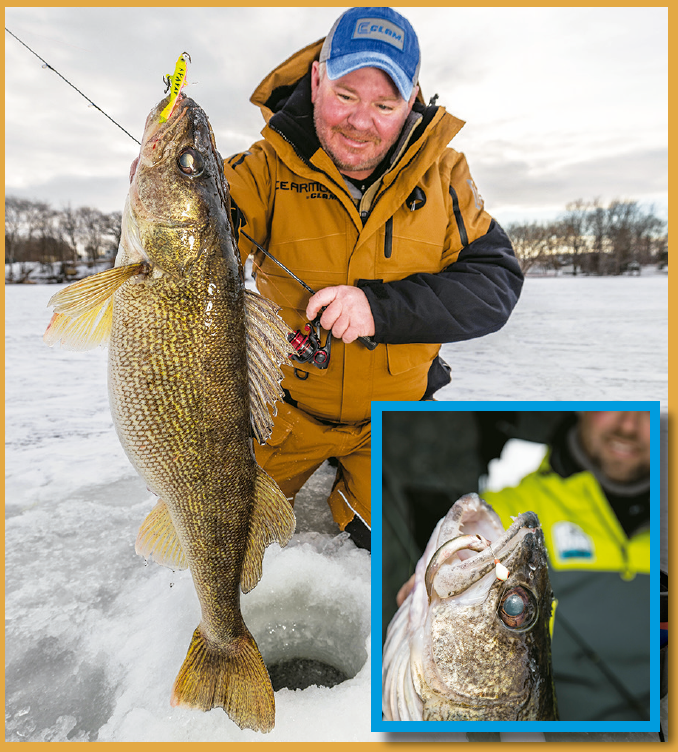 Seasoned walleye pros like Brian Lindberg keep a variety of lures on hand when the walleye bite hits midseason. Photos by Clam

Midwinter walleyes become more difficult to consistently put on the ice. They aren’t impossible to catch, but by nature, they’re less active than during the early season.

By the time the calendar flips to February, these fish have had pressure for several weeks. They’ve seen just about every lure, many aggressive feeders have been picked off, oxygen levels are dropping, and feeding windows are shorter.

But don’t throw in the towel. A few adjustments with presentations and lures will keep you putting fish topside. Don’t expect a crush fest like the early-ice period, but you can target and catch walleyes during the midwinter period.

Jigs and spoons with rattles will continue to produce walleyes during the middle of the ice fishing season. It doesn’t matter if they’re vertical or horizontal baits, rattles will attract the attention of lazy, neutral, or negative fish.

Some of the more aggressive and larger walleyes you’ll encounter at this time of year suspend. They’ll cruise higher in the water column looking for suspended forage, and baits with rattles draw them in (sometimes from a distance) for reactionary bites.

Experiment with size. Often, those larger profile rattle baits that were appealing early in the season are less effective. Sure, work baits that are loud, but a smaller, shorter profile is often too much to turn down.

Jigs and spoons that glow are always excellent walleye producers, especially during the ice fishing season, and even more so during the dark, middle of winter.

Again, these fish feed less as the season wears on, with spurts of activity that typically occur early and late in the day – low-light periods, often overnight, and even during cloudy days is when glow baits become productive.

You’re drawing in the limited number of fish willing to eat with some aggression. So give them something they can see when the dinner bell rings.

The key? Keep them lit. Choose baits that glow bright and hold a long charge. Reds, white, blues, and pinks are fine glow choices; just invest the time to activate them.

A little bend in the profile

Working a spoon that simply looks different or provides an action that sets itself apart often triggers midwinter walleyes. Think about baits with a bend or concave front/back in the body. They produce more of a subtle approach, one that flutters, sort of floats down or drops slow when jigged. The dive-bomb approach with heavy spoons or hard, horizontal baits mostly has run its course for the season. But something that fishes lighter, with a bend or twist, will turn these less aggressive fish.

It’s more of a presentation than a lure or spoon, but the simple bobber line/deadstick offering may account for more midwinter walleyes than anything you’ll drop down a hole.

Simple, but effective, don’t overlook the dead stick. It’s the most natural offering you can present by simply letting the minnow do the work.

Deadsticks, setlines, bobber rigs – whatever you call them – are part of a one-two punch that many anglers implement to great success.

You’ll often draw walleyes in with a jigging spoon or lure, but they’ll change course and attack this natural, super subtle option more consistently than most aggressive options.