Home » Wisconsin » Lake Profile » Anglers smitten with Wildcat and Big Kitten? Why not? 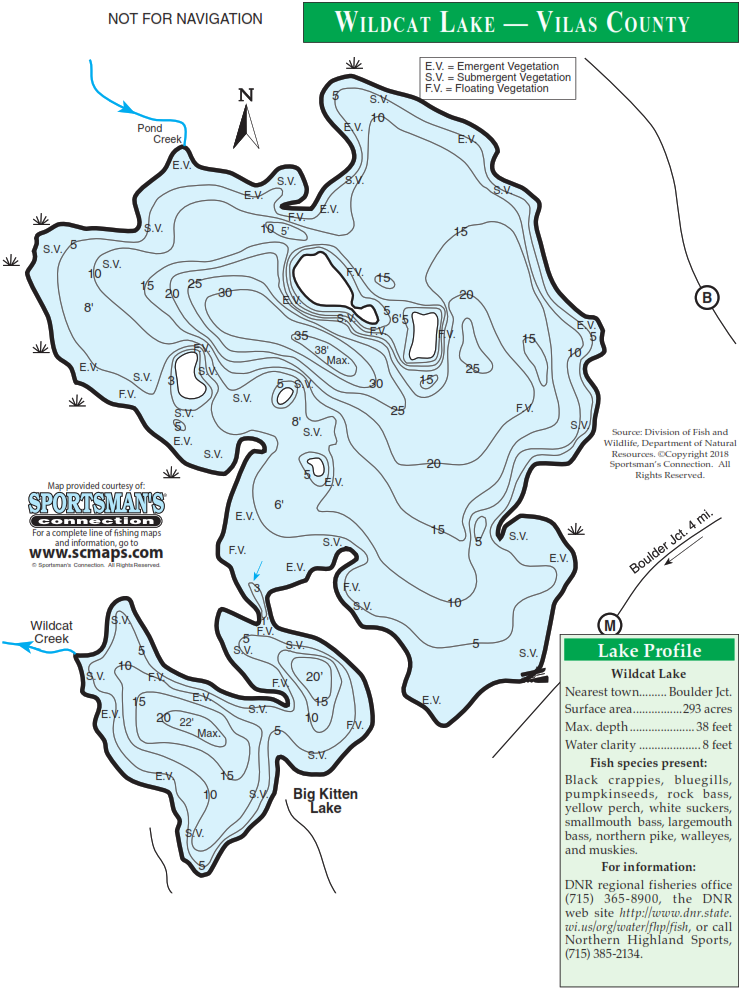 Any fisherman driving to northwestern Vilas County is most like going to be driving north, or maybe from the west. So why go to 290-acre Wildcat Lake north of Boulder Junction when there are so many other lakes to fish between Tomahawk and Boulder Junction?

For one thing, anyone living in or visiting the area might want to keep Wildcat Lake – and it’s adjoined 50-acre neighbor Big Kitten – in mind for days when big winds make it difficult to fish nearby Trout, Presque Isle, Muskellunge, Big Arbor Vitae, Fence, White Sand lakes, or the Manitowish Waters chain.

It doesn’t hurt that Wildcat fishes “bigger” than its actual size. With five islands, a decent amount of structure, depth and weed edges, there are plenty of places to seek out muskies, walleyes, bass or panfish. The lake’s bottom is 70% sand, gravel or rock, so any gravel patch or rock hump also can hold fish.

Wildcat and Big Kitten are drainage lakes, with Pond Creek bringing water into Wildcat’s northwest corner. Wildcat Creek takes water out of the system from the west side of Big Kitten. There is one public boat landing on Wildcat. Anglers can enter Big Kitten via a short thoroughfare that connects the two. Big Kitten has two lobes that hit depths of 20 and 22 feet.

The local DNR fishery team’s most recent comprehensive survey of both lakes took place in the spring of 2016. Both lakes are considered highly fertile. They have a combined surface area of 356 acres and 6.8 miles of shoreline. The spring surveys were conducted with fyke (trap) net work, followed by electrofishing surveys at night using shocker boats.

A mark-and-recapture (fish from the fyke nets get a fin clip, then the shocker boat night survey captures all fish and allows a comparison of clipped to non-clipped fish) survey of Wildcat estimated an adult population of 719 walleyes, or 2.4 adults per acre.

That estimate does not reflect the entire walleye population of Wildcat Lake because the smaller juvenile walleyes were not included in the calculation.

The bulk of all captured walleyes ran 15 to 19 inches.

The fisheries team also handled 118 muskies between the two lakes. Only two (1.2%) of those muskies were 40 inches or larger. The longest muskellunge captured was a 41.4-inch female, which comes in under the reputation Wildcat has locally. No hybrid muskies were captured, but the lake is known to produce a tiger muskie now and then.

The biggest size group of muskies ranged from 28 to 34 inches.

Northern pike are rare in the two lakes. A total of 27 were captured during this survey.

The average length of those surveyed pike was decent, though, with 14.8% being longer than 26 inches. The longest northern pike taped at 28½ inches The biggest size group were 21 and 22 inches long.

All if the panfish information gathered during that survey was collected from three halfmile electrofishing stations in mid-May that year. Overall, Wildcat and Big Kitten have an abundant panfish population, although the lakes lack numbers of quality-sized fish.

Bluegills are the most abundant panfish species present in Wildcat and Big Kitten. Few bluegill longer than 6 inches were captured in the survey. No bluegills from a measured sub-sample of 112 fish were longer than 8 inches. The longest bluegill measured 7.7 inches.

Black crappies are the least abundant panfish in the two lakes. Of a sub-sample of 18 measured black crappies, just 5% were at or longer than 10 inches. The longest black crappie captured during the survey was 11.4 inches