More often than not, when a new governor’s administration takes office in Columbus, the worker bees have to learn the names of the new brass along with their quirks and demands.

Even when a governor gets to keep his or her name plate over the door, the upper echelon of departments, bureaus, divisions, and the like often see change. 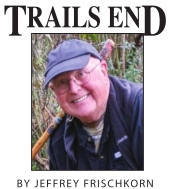 That is not the case with the Ohio DNR, however. Staying behind the desk she’s used since being first appointed four years ago by Ohio Gov. Mike DeWine is the agency’s director, Mary Mertz.

So, too, will Kendra Wecker, chief of the Ohio Division of Wildlife. She also gets to keep her own office, name plate, and agency-supplied cell phone.

“Yes, I will remain the chief of the Division of Wildlife,” Wecker told Ohio Outdoor News in late December. “It’s a great honor to lead such an outstanding group of dedicated fish and wildlife professionals.”

In announcing her agenda and targeting specific bullseyes, Wecker went through a list that likely will please most – or many, at least – of Ohio’s sportsmen and sportswomen.

Missing, though, are a number of thorny topics that occupy the minds of more than few sportsmen and sportswomen. Among them is the glossing over the virtual collapse of yellow perch stocks in the Central Basin of Lake Erie, which last year – in practical terms – experienced no new recruitment.

Instead, the ODNR director, and chief have glossed over the justifiably doom-and-gloom state of the Central Basin’s yellow perch with the seemingly dismissive – though accurate – claim to Lake Erie’s status as the best place in the world to catch walleyes.

All of that being said, Wecker does address several key areas that she intends to direct her staff.

Wecker says she anticipates the wildlife division will move forward with proposed H2Ohio projects that will restore “wetlands vital to reducing the nutrient runoff into Lake Erie.”

Along those lines, Wecker points to the need to make repairs to the state’s wetlands infrastructure. Correctly noting that wetlands provide nesting and stopover areas for migrating birds while providing waterfowl hunting opportunities, Wecker says where “routinely, the earthen dams need repairs, and water control structures must be replaced to ensure the functionality of these facilities.”

Construction will commence on the repairs at Killdeer Pond 27 in northwest Ohio this year with construction to proceed on the Magee Marsh Lakefront Barrier with its expected completion in 2024, Wecker likewise says to specifics.

“And the Spring Valley Marsh dike repair will be completed this year as will the dredging of the Pipe Creek Wildlife Area channels. And “Pickerel Creek’s’ ‘GTR’ unit will have electricity run to the pumps to allow for water level manipulation,” Wecker says.

Circling back to the Western Basin, Wecker says the wildlife division will purchase a new Lake Erie research boat to be used in that section of the lake. Information gathered from survey work conducted on such vessels helps “guide our management decisions for the nearly one-billion-dollar fishery,” Wecker said.

Then, too, the wildlife division is looking forward to the opening of fish cleaning stations at the Avon Lake, Huron, and Mazurik boat ramps. These stations will be operational by spring, Wecker says.

Not lost is the wildlife division’s goal of improvements to a number of state fish hatcheries. This list includes a $1.6 million project at the Senecaville State Fish Hatchery. Completion is anticipated by March 2024. The Senecaville Hatchery produces walleye, saugeye, hybridstriped bass, and channel catfish for stocking statewide, Wecker says.

“And we will initiate a $1.2 million improvement project at the London State Fish Hatchery,” Wecker says.

Meanwhile, the wildlife division will seek funding to support a $9.4 million improvement project at the Hebron State Fish Hatchery. Once again, this plan is to improve water supply, water filtration, and ponds to expand fish production, Wecker says.

High on the list as well is to refurbish dams at Spencer, Wingfoot, and Highlandtown Lakes “ and complete assessment at Shreve Lake.”

“We will also work with the Lake County Port Authority to initiate improvements at the Fairport Harbor Marina,” Wecker says.

“The Division of Wildlife will assess feasibility for improvements to the Steubenville Access on the Ohio River, and initiate design work to renovate the campground and Cheshire Road access sites on Alum Creek Reservoir,” Wecker says.

Wecker says the state’s shooters are not being ignored. The wildlife division is focusing on expanding the hands-on shooting opportunities and training at both the Delaware and Spring Valley training centers.

Also, the wildlife division will undertake improvement and renovation projects at Woodbury and Grand River shooting ranges with the latter to undergo an evaluation for “green” options for there and “future ranges,” Wecker says.

“We also will evaluate an assessment for a shooting range in Northwest Ohio,” Wecker says.

“Stay tuned, 2023 will be another exciting year for Ohio’s fish and wildlife conservation and all who enjoy it!” Wecker said in conclusion.