• During the 2022 white-tailed deer gun hunting season, state wildlife officer Brad Kiger, assigned to Franklin County, received a call from a landowner who found deer remains on his property. The landowner had not given anyone permission to hunt the property. Officer Kiger found drag marks going from the remains onto an adjacent property and contacted a hunter on that property. It was determined that the hunter tracked his harvest onto the neighboring property without permission. It was also found that the hunter was not wearing hunter orange and the deer was not game checked properly. The hunter received two citations and was ordered to pay $376 in fines.

• State wildlife officer Austin Levering, assigned to Knox County, participated in the first annual Pumpkin Shoot at the Knox County Fairgrounds’ natural resources area. The event was a great way to introduce the public to the newly constructed archery range, which was funded through Ohio DNR grants. It offers 10- to 70-yard archery opportunities and is open to the public from sunrise to sunset daily. Officer Levering instructed students on basic archery skills and safety. Participants were able to shoot compound bows at various targets, including pumpkins.

• During last year’s waterfowl season, state wildlife officer Levi Farley, assigned to Paulding County, was patrolling after a heavy snowfall. Officer Farley contacted a group of four waterfowl hunters in layout blinds and checked for licenses, Ohio Wetlands Habitat Stamps, HIP certification, and federal Migratory Bird Hunting Stamps. Later, officer Farley noticed a mail carrier’s vehicle stuck in deep snow and activated his overhead lights to inform oncoming drivers of the hazard. With help from the waterfowl hunters he had just checked, officer Farley pushed the vehicle back onto the roadway. The mail carrier was grateful for the officer’s and hunters’ help.

• In mid-November, state wildlife officer Ethan Bingham, assigned to Williams County, attended the Williams County Pheasants Forever youth hunt. A handful of young hunters from the area participated in the event, a fantastic way to get the next generation of hunters involved in upland hunting. Officer Bingham gave a safety talk and shared the duties of a wildlife officer with the group. 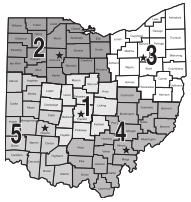 Report of the weeK

Carroll County Wildlife Officer Scott Cartwright discovered a group of people at a public fishing area after hours. Those in the group were found to be consuming alcohol, operating a vehicle off road, and littering. Five individuals were charged and ended up with fines and court costs of $1,475.

• State wildlife officer Scott Cartwright, assigned to Carroll County, discovered a group of people at a public fishing area after hours in Carroll County. The group was consuming alcohol, operating a vehicle off-road, and littering. Five individuals were charged with multiple violations and were found guilty in Carroll County Municipal Court. They were ordered to pay a total of $1,475 in fines and court costs.

• During the 2022 white-tailed deer gun hunting season, state wildlife officer Mark Basinger and wildlife officer supervisor Dan Perko investigated a hunting complaint in Perry County. A doe was harvested and retrieved on private property by someone who did not have permission to be on the property. The individual was charged with hunting without permission and the deer and gun were forfeited as evidence. The individual pleaded not guilty and the case is pending in Perry County Municipal Court.

• State wildlife officer Trent Weaver, assigned to Montgomery County, was contacted by hunters who found a set of keys in Sycamore State Park. The keys had a trap tag and wildlife Customer ID on them. Officer Weaver used the customer ID to call the trapper who had lost them. He helped the hunters coordinate returning the keys to the owner. The trapper later called officer Weaver to thank him for the return.