5-year-old’s first time ice fishing always an adventure, even without a hot bite

I recently found out I can’t run as fast as a 5-year-old for very long. That revelation came as a bit of a surprise.

A 5-year-old kid bundled up in heavy clothes and boots shouldn’t be able to run very fast, nor for very long, on a lake covered with snow and some slush. Any self-respecting adult should be able to blow the doors off a 5-year-old, no? Yet, there she went again, running on past, long, blond hair just a-flying, and hollering, “Opa, you’re it.” 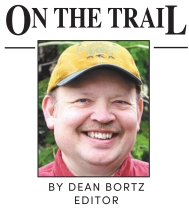 Time to drop hands from hips and chug after the kid one more time.

That afternoon I was reminded young kids don’t have to catch fish to have fun ice fishing, as long as they have snacks and someone willing to build snow forts, throw snowballs at, make snow angels, and even play hide-and-seek.

“Hide-and-seek? You want to play hide-and-seek out here on the ice? Where am I supposed to hide?”

“Behind the auger,” said one of the tiniest voices I’ve ever heard.

Turns out 5-year-olds can be kind of crafty, too.

Folks who have been reading this space for a while know my youngest son, Daniel, and his wife, Audrianna, have been living and working out west the past eight or nine years, first in Denver, Colo., and the past five years in Gillette, Wyo.

They added another soul to their family in June, so now they have two daughters, Charlotte (Lotti), who will be 5 in late January, and Veronica Rose (Ronni Rose, or more recently, Vern), who will be 7 months old in a couple of days. They loved living and working in Wyoming, but decided to move back to northern Wisconsin after Thanksgiving to get the kids closer to family members.

With the wanderers now settled back in Arbor Vitae and Vilas County, it seemed like a good idea to get Charlotte outside in hopes of helping her catch her first fish through the ice once temperatures moderated a bit after Christmas. Plus, because of the cold weather, she had been cooped up inside for more than a week and was driving her mother up the wall.

It’s certainly great to have two of our grandkids so close to home, but I discovered another advantage to having the adult kids nearby, too. I was able to take all of my tip-ups and jig poles over to their house where Daniel willingly inventoried our collective gear and spooled up new line, rigging some tip-ups for pike and others for walleyes as he waded through the tangled mess.

We fished New Year’s Eve and again on Jan. 2, but without much luck either day. Longtime family friend Shane Kazlausky caught a largemouth bass the first day. Dan caught a 27-inch pike. We weren’t exactly sure we had safe ice that day, so the kids stayed off the ice. But, by Jan. 2, we had a safe path plotted on a local lake and took Lotti out for her first day of ice fishing.

When the fish aren’t biting, adults have to find other ways to keep the young kids entertained. Giving Lotti a jig pole worked for a while, but when the bluegills, perch, and crappies didn’t cooperate, someone had to come up with a different plan.

Her dad busied himself with drilling holes, checking depths, gauging weed edges, and moving tip-ups. That’s all fine, but guess who then had to play the entertainer role? Yup. No complaining here, but, wow, can that kid run.

There’s a big difference between being willing and having the wind to act on that willingness. The Thanksgiving homemade pumpkin pie that went down so easily a few weeks ago doesn’t help a grandparent chase down a chortling kid doing the nan-nan-a-boo-boo routine now.

We didn’t get skunked. One flag popped on a tip-up set on a 12-foot weed edge that had produced fish for the kid years ago. The flag produced a sizeable northern pike that’s headed for the frying pan once we collect a couple more. That means we’ll be back on the ice in the days to come. That also means I’m going to start doing wind sprints between now and then so this 5-year-old kid displaced from the Mountain Time Zone doesn’t keep embarrassing me on the ice.