Yellow Lake was surveyed in 2021 to assess the status of the fishery while conducting a population estimate for walleyes and index the catch rates of muskies, northern pike, largemouth bass, and panfish.

There are three public boat landings on Yellow Lake, located at Jeffries Road, Lake Avenue, and Yellow Lake Road. Yellow Lake is a popular multi-species fishery in Burnett County. It also supports one of the best lake sturgeon hook-and-line fisheries in Wisconsin 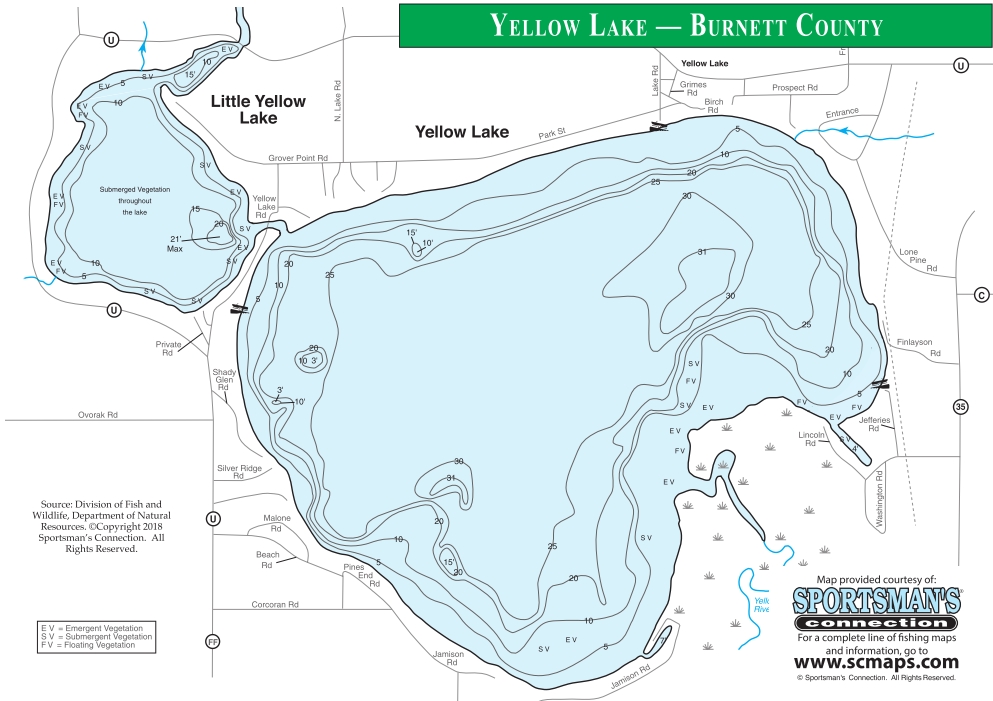 Muskies have been the only species stocked in Yellow Lake since 2006. Prior to 2006, walleyes and muskies were stocked. Muskies are stocked at a rate of 0.5 fish per acre on an alternate year basis.

There were 869 walleyes collected with the river electrofishing survey. Walleyes ranged from 12.7 to 28.2 inches. The male-to-female ratio was 28:1.

The overall growth rate increased for males and female adult walleyes from earlier surveys. The mean length-at-age was generally greater than those from 2008 and 2014. Survival was estimated at 75%, similar to 2014 (73%).

The walleye population had a lower density compared to prior surveys. The decrease is likely due to low levels of natural reproduction in 2016, 2017, and 2019, according to Craig Roberts, DNR fish biologist who drafted the survey report.

“Also, 2020 provided a strong year class, being the third highest since 2009. This suggests that the population should be on the upswing. Natural walleye populations are known for going through boom-and-bust cycles. However, assessing walleye natural recruitment through annual age-zero surveys and the adult population through population estimates should dictate any future management actions,” Roberts wrote.

There were 32 muskies collected in fyke nets. The catch rate was twice the rate of 2008. Also, this rate is near the 75th percentile (0.65 fish per net night) for “complex two-story muskie lakes” in Wisconsin. Compared to other Class A1 waters, Yellow Lake was above the median (0.42 fish per net night). Muskies ranged in length from 24.3 to 50 inches.

Yellow Lake muskies grow quickly – above the 75th percentile for similar lakes. On average, muskies reached 32.8 inches in five years and 43.9 inches in nine years. The age 5-year class was the most abundant class in the fishery and made up 60% of the sample.

The muskie population has rebounded since 2008.

“Yellow Lake now appears to have a healthy population with trophy potential. DNR stocking accounted for all muskie observed and helped confirm that there is no natural reproduction occurring in Yellow Lake,” Roberts said.

Roberts and the rest of the team developed a list several recommendations for Yellow Lake based on the last survey, as well as previous surveys.

While the walleye population had the lowest recorded estimate, the population should increase following a strong year class in 2020. Natural reproduction remains the best option for walleye recruitment, and no stocking is recommended at this time.

The muskie population appears to have increased since the 2008 survey. No management changes are needed for muskies.

Efforts to increase habitat complexity in the Yellow Lake system should also be encouraged, where applicable. Inputs of coarse woody debris, protection/promotion of aquatic vegetation and maintenance/ restoration of vegetative buffers are needed habitat work.

Pike are abundant and provide another opportunity. No changes are needed.

Both bass species are at lower densities, likely due to degraded habitat.

Bag limits may be needed if bluegill size and perch numbers continue to slide.

Habitat preservation is needed because the Yellow River serves as important spawning habitat for walleyes, sturgeon, and other species.