Home » Features » Crossbows as a matter of fact

Crossbows as a matter of fact

At 10:30 a.m., I noticed a nice doe moving my way from 70 yards distant. As I raised the crossbow, the antlerless deer stopped and stared at me.

My arm muscles ached as I held the crossbow in an uncomfortable position. When she began walking again, I sensed an opportune time to shoulder the crossbow. When she stopped at 30 yards, I launched an arrow that sped through her vitals. I found it strangely satisfying to tag my first deer with a hunting tool with roots dating before Christ. 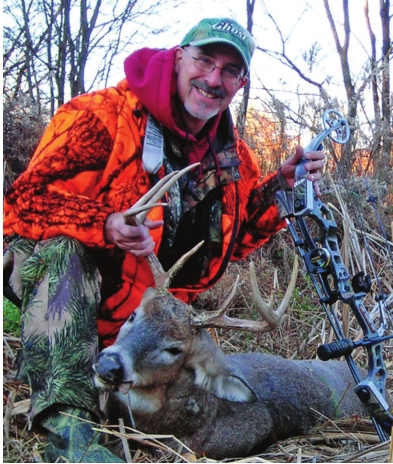 Make no mistake, I still prefer hunting with my compound bow, which I’ve done since 1982 after my wife (then fiancée) surprised me with a bow as a Christmas gift. I have hunted with several compound bows, a recurve, and as you just read, a crossbow. Just being in the archery woods brings me joy!

Unfortunately, the unjust criticisms I read directed toward crossbows and sometimes their users cause me sadness. I also feel a little guilty because, at one time, I foolishly criticized the use of crossbows.

I had my eyes opened in 2006 when attending an “archery” conference in Ohio, where crossbows had been in use for years. There I was granted access to wildlife biologists, game officials, and archery equipment manufacturers.

I learned that despite years of crossbow use, Ohio’s deer population and the quality of their whitetails were on the upswing, at the same time New York’s and Pennsylvania’s deer were in decline.

Let me be clear. I am not criticizing game managers from the Empire State or the Keystone State. Right or wrong, in 2006 and a few years prior, they were taking actions they felt necessary for the health of the animals and the carrying capacity of their states.

Still, it was obvious crossbows were not the equivalent of the big, bad, Boogey Man!

I asked an Ohio game manager if crossbows had any effect on their deer herd. His response hit me right between the eyes.

“Show me hard data from any state that concludes crossbow use will negatively impact animal populations. You will never find such a study,” he said.

Later, I had a conversation with a white-tailed deer biologist who warned against hunters criticizing any humane means exercised by hunters to kill an animal.

“We correctly explain to anti-hunters that we contribute funds for conservation and game management by purchasing licenses and paying taxes on hunting gear. The funds raised for conservation based on a $600 crossbow are identical to the funds raised when someone purchases a $600 compound bow,” he said. “Also correctly, we explain we protect wildlife by assuring animals do not exceed the carrying capacity of their environment while making sensible use of a valuable food source.”

Then he asked: “Does the instrument used to harvest the animal have any biological effect? When hunters argue amongst themselves about what tool is used for hunting, unappreciative anti-hunters stand ready to twist their words to claim we really do not believe we serve a greater good!”

There are too many crossbow misconceptions. To read some editorials, you would think crossbows scout the woods on their own, lift themselves invisibly into shooting position, and send electronically guided arrows to their target. The fact remains that humans must still perform the acts of preparation, hunting, and shooting.

When I started bowhunting all those years ago, compound bows were heralded because they let off 25% to 30%. Modern compound bows provide up to 80% relief. Add to that advantage that most of us use mechanical aids that also help hold the string back. We used to wait until the animal was in place for a shot before pulling the arrow back. Now we can hold the draw for quite some time and anticipate a shot opportunity.

“Yeah, but deer can see me pull back a bow,” you might argue. I used to make that argument, but then I realized crossbows must move as much or more to be shouldered.

If you are a bowhunter complaining about a bow being seen more than a crossbow, I hope you do not hunt from a treestand. While at that 2006 conference, a representative from a popular, portable treestand manufacturer made an undeniable statement.

“Portable treestands account for more archery success than any other innovation,” he said.