A once-in-a-lifetime buck for Hunter

I get my share of big-buck pictures every fall, but I have to admit the ones sent to me this year by Ryker Bergo stood out. Of course, the buck featured was attention-grabbing enough: The Winona County giant sported 23 scorable points and should push 220 inches when it’s officially measured for the Boone & Crockett books. 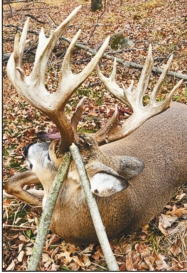 But the photo that made me pause was the one Bergo sent that featured his family – wife Lena, son Zeke, and daughter Wren, posing with him behind the giant buck. Lena Bergo is holding an enlarged photo of a smiling young boy.

So I asked Ryker who the boy was. He was more than happy to tell me. “That’s our son, Hunter,” Ryker said. “He would have been 17 this year.”

Hunter Bergo was 10 years old when he was killed in an ATV rollover near the Bergo home outside Pilot Mound, Minn. in Fillmore County. He was on his way to get eggs from a neighbor, the eggs to be used in a welcome-home cake he was baking with his grandmother.

“Lena and I were on one of the few vacations we’d ever taken, a three-day trip to Mexico, and Hunter wanted to bake a cake to welcome us home,” Ryker said. “We were heading to the airport when we got the call from my brother.”

The Bergos’ grief was beyond measure, but the couple handled it in what seems the best possible way – by speaking of Hunter frequently and with fondness and love.

“He was my constant companion since he was a baby,” Ryker said. “I have never seen a kid so enthralled and captivated by nature.” (Ryker is co-host of Dirt Road Outdoors TV – www.facebook.com/DirtRoadOutdoorsTv – and is an avid hunter.)

“Hunter started filming for me at a very young age and he absolutely loved it,” Ryker said. “We almost always used a ground blind, and he would stay awake and alert and looking for game from the minute we got in there until the minute we left. He didn’t need a book, or a video game, or any form of entertainment. The woods were all he needed. In fact, one of the few times we hunted from treestands was on a Canadian bear hunt. I had fallen asleep and suddenly I felt this tap on my shoulder and it was Hunter, whispering ‘Dad, there’s a sow and cubs coming in.’”

After Hunter’s death, Ryker knew the best way to honor his memory was to keep doing the very things they loved to do together. And as a skilled outdoorsman from his youth, Ryker has done just that, taking several Boone & Crockett-class whitetails and other game. Going into the 2022 season, he knew he had at least one great buck to pursue, but he also knew he’d have to keep pressure on the buck to a minimum in order to score.

Ryker’s first clue about the buck came during the summer, when trail cameras gave the family a glimpse of a buck that could be pretty special.

“Luke and I knew there were three good bucks on the farm, but this one really didn’t look super big, probably because he wasn’t that wide,” Ryker said. “Well after velvet-shed we got a better pic of him, and then we knew we were dealing with a really nice buck.”

The early archery season passed, as did the first several days of Minnesota’s firearms season, with no sightings of the buck. Then on Nov. 11, almost a week after the firearms opener, Ryker finally laid eyes on the giant. 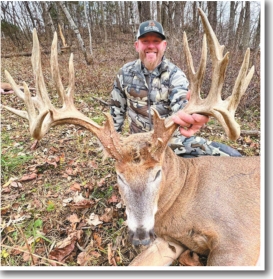 “I’d decided to sit all day,” he said. “I’d been so busy at work I couldn’t bowhunt much, and the first few days of gun hunting he hadn’t showed. The day I killed him was amazing. I’d seen probably 20 does and four bucks 120 inches or better,” he said. “Then at 3 p.m., I saw a doe coming toward my stand with a big-bodied deer following. I got just enough of a glimpse of the buck that I was pretty sure it was him. I was self-filming, so I had to make sure the camera was running, and then I glanced down to make sure my gun was ready and realized I hadn’t put the clip in! I was sitting there with a huge buck in gun range and my gun was empty and the clip was in my pocket.”

Fortunately for Ryker, the doe in front of him was busy snuffling acorns and the buck’s head was hidden behind brush as he found his clip, slipped it in his 20 gauge, and chambered a round.

“The doe got a little goosey and started to wander off a bit, and fortunately for me the buck just flicked his tail and followed her,” Ryker recalled. “I had about a 50-yard shot and was pretty sure I’d hit him well, but I managed to stop him again and took a quartering-away second shot. Then I saw him stumble pretty hard as he moved off, and then he went down. I gave him 30 minutes just to be sure, then climbed down to take a look at him.”

Like many hunters, Ryker has witnessed “ground shrinkage,” but just the opposite happened with this buck.

“He kept getting bigger as I walked up to him, and when I finally got my hands on him it pretty much blew my mind,” he said.

Ryker had every right to be awed, because his Minnesota monster sported 23 scorable points and, while not officially scored yet, should gross in the 220s.

With the Gopher State’s blaze-orange requirement, Ryker has fielded more than a few questions about not wearing hunter orange in his photos. The happy hunter has an easy response to those queries.

“My second shot went from just in front of his hindquarters and exited in the opposite shoulder, so field-dressing him was a mess,” he said. “Then I had to load him in the truck myself, which I did by bear-hugging the buck and hoisting him up in the truck bed. My outer clothes were so drenched in blood and smelled so bad that I wondered if I’d ever get it out. Anyway, when it came time to shoot pics the next day, there was no way I was wearing those clothes!”

And, of course, some of those photos included his family, with Hunter’s infectious smile beaming from behind the buck.

“Some people have asked, why would you take a picture like that? and I just kind of shake my head,” Ryker said. “I feel like Hunter is still with me, every time I walk into the woods. And he is still part of our family, and always will be.”