These days, New York State is capable of producing big white-tailed bucks, and every year lucky – or simply proficient and dedicated – hunters connect on true trophies.

Those big-bodied, heavy-racked bucks can come from anywhere in the Empire State, but a surprising number are harvested each year in an area of the state that’s perhaps not known for its deer hunting.

Long Island’s Suffolk County has good numbers of deer, the product in some cases of a lack of public hunting access that allows whitetails to age and grow (as well as multiply to excessive numbers). While many of the big bucks are taken on private land, there are some quality public land options on the island for hunters willing to take the steps necessary to gain access to the DEC-managed lands.

One of those is the Otis Pike Cooperative Hunting Area, a sprawling DEC-managed tract that offers hunting access in a region where that can be a challenge.

“It’s very popular,” says DEC Region 1 wildlife biologist Leslie Lupo. “All our managed lands are because it’s way easier (than securing access to private lands). And the deer numbers are pretty good too. Last year we saw an increased take, which was a little surprising. It could have been a product of Covid – people getting out more to hunt, or the extended shooting hours (half hour before sunrise and half hour after sunset).”

There’s 7,350 acres of public hunting opportunity, but before you entertain thoughts of tracking a big buck through the parcel, a little education first.

To ensure safety in the popular public hunting ground where access is in high demand, there’s a registration process hunters must navigate, which includes a drawing for designated spots within the parcel.

To hunt deer on any DEC-managed lands in Suffolk County, hunters must enter a drawing that’s always held on the first Tuesday of December. There’s a Long Island State Lands January Firearms Registration Form to be completed, the link to which can be found on the DEC website.

The deer hunting season is a liberal one in Suffolk County, with an Oct. 1-Jan. 31 archery season (crossbows are prohibited in Suffolk County), as well as the January shotgun and muzzleloader offering.

“Quite a few hunters are on the property when the archery season opens. And we have a lot of Deer Management Permits available in WMU 1C, so people do harvest a lot of does,” Lupo said, adding that the occasional buck that has shed its antlers in January is also a possibility during the firearms season.

Hunters also, if they fail to make a reservation or if the reservations are maxed out, can hunt on “stand-by.” At 8 a.m. each day, any parking spots that haven’t been filled will be doled out to those hunters.

Lupo says that after the initial rush early in the season, hunters “can still walk up and make a reservation after the drawing is over. There’s always something available later in the season, after opening day and the opening week.”

During the January firearms season, legal implements include a archery gear, a shotgun with slugs or a muzzleloading rifle or pistol, shooting a single projectile and having a minimum bore of .44 inches. Shotgun barrels may be rifled, and scopes are permitted. But again, Suffolk County’s prohibition on the use of crossbows remains intact. 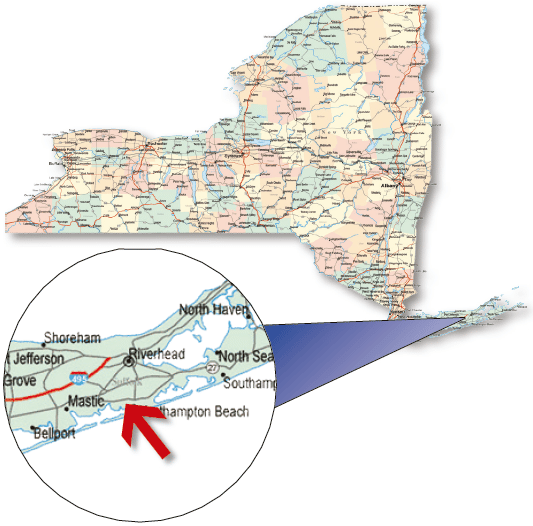 Lupo says hunters should expect to see other hunters afield, and reminds those participating that the DEC lands abut some private properties. But those spots are well marked with signs and there shouldn’t be any confusion as to where you’re hunting. (During the January firearms season all other uses of the Otis Pike property are prohibited.)

In addition to the deer hunting opportunities, fall turkey hunting is an option, and next spring Suffolk County will hold its first-ever spring gobbler hunt, which should draw more hunters to Otis Pike.

The property is also a pheasant release site, and hunters pursue stocked birds on the property through a similar access procedure.

To arrive at the hunter check station, take Route 495 (the Long Island Expressway) to Exit 68, then head north on the on the William Floyd Parkway (County Route 46) to Route 24 West. After a quarter of a mile turn right onto Randall Road; the entrance is 300 feet down the road on the left side.

The January firearms deer season in Suffolk County begins this year on Jan. 1 (always the first Sunday in January) and ends on Jan. 31. As mentioned, legal implements include shotguns (with slugs, muzzleloaders rifle or muzzleloading pistol, shooting a single projectile, having a minimum bore of 0.44 inches. Crossbows are not allowed but archery hunting is. Valid tags include the Regular Season Deer tag, Deer Management Permits (DMP) for Unit 1C, Archery tags, Muzzleloader tags and Bonus DMPs for Unit 1C.