What’s in a fishy name? Depends on place, time

As a lake detective, I deal with a variety of names for fish, fishing gear, and nautical terms, and I need to keep them straight.

Fortunately, every fish species has a unique scientific Latin name, but sometimes the common name can throw you for a loop.

For example, the Lota lota (the scientific name) is also known as the freshwater cod, burbot, lawyer, or eelpout. The Amia calva also has several names, including dogfish, bowfin, or mud pike. The Latin name is always correct, while common names can vary, sometimes by region.

In Texas, bluegills (Lepomis macrochirus) are called perch. I’m not sure what actual perch (Perca flavescens) are called there, but they are rarely caught anyway. 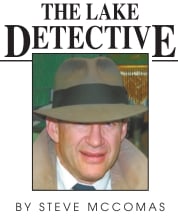 The state fish of Hawaii is the Humuhumunukunukuapuaa (Rhinecanthus rectangulus). I usually just call it a reef triggerfish, its other common name.

I’ve found some folks even name their fish. The most popular fish names are Goldy, Bubbles, Charlie, and Floater (source: the internet).

I’m always on the lookout for my favorite freshwater fish name, the quillback carpsucker (Carpoides cyprinus), typically found in lakes and rivers with good water quality. The Minnesota state record is 7 pounds, 4 ounces, and was caught in Upper Red Lake in 2010.

It appears there are some saltwater terms that are similar to freshwater jargon.

For example, in shallow seas, a paddy is a floating kelp bed that mimics lily pad congregations in lakes. “Toads” are huge fish in saltwater terms, while in lakes, toads are, well, toads. “Logs” are big barracuda, but in lakes, a log could be a muskie or it could be a real log. At the seaside marina, “worms” are sardines, anchovies, and other live bait, while at the local bait shop, worms are simply worms.

A seadog is a seal or sea lion turned fish-robbing critter. The equivalent in lakes would be
otters and even snapping turtles. “Chumming” is a common technique for
attracting fish and is used occasionally in lakes. But a “chummer” is a
seasick angler.

Sometimes fish names are changed for financial gain. The saltwater slimehead can
live to be 150 years old. Muciferous canals in its head are mucusfilled
canals that are a part of a sensory system to detect prey and avoid
predators. In stores and at restaurants, you’ve come to know it as
orange roughy.

The Patagonian toothfish can weigh over 200 pounds and is found in cold
waters. It has good taste and texture. It sold better in markets when
fish merchants changed the name to Chilean sea bass.

The saltwater dolphinfish also had a name change. It got its name because
the 5-foot fish would swim ahead of sailing vessels, much like
dolphins do. However, dolphins are marine mammals whereas the
dolphinfish are conventional ray-finned fish. To avoid consumer
confusion on the menu, dolphinfish were marketed using their Hawaiian
name, Mahi-mahi.

An estimated 20 million to 50 million pounds of Asian carp – Copi – could
be harvested from the Illinois River annually with millions of pounds
found in other waterways. Copi currently is featured in 21 restaurants
in Illinois and Tennessee and even in the Tabard Inn in Washington D.C.

I also keep up with boating jargon. My go-to reference is by Admiral W.H.
Smith, who wrote down 14,000 ship-related terms and published them in
1867.

Some terms are relevant today, such as “spueing the oakum,” which occurs “when a ship’s
laboring forces the caulking out of her seams.”

I think I’ve experienced that coming back to a Lake Mille Lacs access when battling 30-mph headwinds.

If you have a lake mystery, drop me a line. Maybe I can solve it. LakeDetective@gmail.com