Wautoma, Wis. — Sam Timm is used to winning awards for his wildlife art.

The retired minister, who lives near Wautoma, has painted wildlife scenes for almost 50 years. His handiwork had been featured on several of Wisconsin’s trout, salmon, turkey, pheasant and waterfowl stamps from 1985 to 2007.

Three of Timm’s latest creations caught the eye of judges of the state Department of Natural Resources’ annual turkey, pheasant and waterfowl stamp design contests. Hunters, conservationists and collectors purchase the stamps, which help fund habitat management and restoration around the state.

He placed first in all three contests, which the DNR holds each year to give artists an opportunity to submit entries to be featured on the next renditions of each stamp.

“I was quite shocked, actually,” Timm said. “I didn’t find out until several days after the contest. I thought I didn’t even place because nobody had called. I thought, ‘Well, there must have been some really good entries.’”

Artists submitted 34 works for this year’s contests, which were judged Aug. 27 at the Wisconsin Waterfowl Expo in Oshkosh.

“Winning stamp contests was a way to get your name out,” Timm said. “That’s why I started entering these stamp competitions that the state had. I was a youth pastor living in Green Bay. I entered some of those competitions and in 1984, I won the two trout stamp (contests) and was the first one in the state to win both – the inland trout and the Great Lakes salmon and trout.”

Timm was born in Shawano and grew up in the Madison and Mount Horeb areas.

“I’ve always loved wildlife,” he said. “My dad was not a hunter, but my grandpa was a hunter and a trapper. He totally lived outdoors and was a very successful trapper. I was always enamored by the hides in his attic. That was the first place I went as a kid.”

Timm attended North Central University in Minneapolis, whichled to him picking up a paint brush for the first time.

“My first painting was in 1975 as a senior in college,” he said. “I saw some art on the wall in one of the offices. It was your typical outdoor scene: two trees, a mountain and a stream.

“I looked at the painting and in 30 seconds, I decided I want to try that,” he said. “I went to a Target store and bought a black, white and burnt sienna tube of paint. My first painting was pheasants. I didn’t even take high school art, so I was self-taught. It sort of progressed from there.”

“I’ve made it a study of what it takes to win these competitions and produce some quality images,” Timm said. “It’s up to the judges. You have no control and in some years it’s very frustrating. I’ve placed second numerous times.” 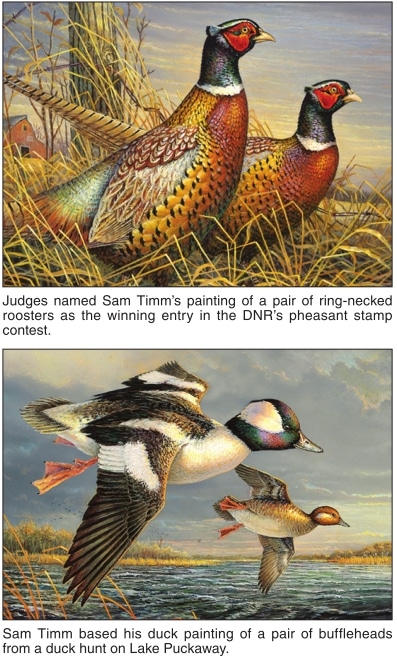 Timm decided for the first time to enter all three of Wisconsin’s bird contests this year.

“I’ve been so busy for a whole bunch of years and haven’t entered,” he said. “I’ve now been retired for two years. About a year ago, I said, ‘I’m going to enter the duck stamp, turkey stamp and pheasant stamp (contests) and see if I can do any good.’”

Timm based his waterfowl painting of two bufflehead ducks on a hunting trip to south-central Wisconsin’s Lake Puckaway.

“I also have a couple of mounted buffleheads for good reference,” he said. “I had an actual bird to look at.”

Unlike the pheasant and turkey contests, the waterfowl contest gives artists plenty of choices for subjects.

Early-morning sightings of turkey on his farm inspired the turkey painting.

“I was working on all three of these at once,” Timm said. “I would work on one and then look at the other ones with a fresh eye, tweak something and go back to the main one. You just have to be patient and keep working. I felt all three of them were good entries. I would even call them very good entries, but what are the judges going to look for? You just do your best and hope for the best.”

Timm has painted hundreds of scenes over the years and most of them include wildlife.

“I go in and draw a lot of designs and I will show it to my daughter and wife,” he said. “We will have our own judging competition. My wife, Jan, and daughter, Stephanie, have artistic eyes. My wife’s an interior decorator and my daughter has a very sharp eye for art.”

Timm’s subjects include birds, deer, elk, bear, and fish “I love painting chickadees, cardinals and smaller birds,” he said. “One of my main sources of income years ago was 5×7 bird scenes. I painted scores of them when I was a youth pastor. I lived on chickadees, the main bird that I painted. I’d go to these shows and would sell as many as I could paint. It was money in the bank.”

Timm’s art can be purchased online through Wild Wings, based in Lake City, Minn.

“They license my art,” he said. “I’ve done calendars and hundreds of thousands of cards. They’ve been marketing my art for 30 years. It’s an honor that anyone would spend money to buy my art and put it up in their house. I’m very appreciative that people have liked my art through the years.”

Timm has no plans to quit painting.

“I’m not just some guy in the city trying to paint a duck, but I’m far from the top of the heap,” he said. “There are many great artists out there. When I look at other artists’ art, I continually realize how good I’m not.

“I try to get good lighting and paint things accurately,” he said. “Lighting, accuracy, good design and good competition. A lot of things that make good art.”

Upcoming outdoor events from across Michigan.

Most of Michigan’s muskie lakes are in the northern Lower and Upper peninsulas – well, except for the best of