The Traverse-City-based Conservation Resource Alliance in a year-end report noted that its project entitled “Free Spanning the Maple,” in partnership with the Emmet County Road Commission, is “just three stream crossings away from entirely freeing the Maple River, which we believe is a significant, first-of-its-kind milestone,” the report noted.

The three remaining stream crossings are expected to be completed in early 2023, depending on fundraising.

The project – a $6.5 million effort funded by a variety of governmental and philanthropic sources – has involved bringing down an obsolete dam, and replacing river-damaging road crossings with improved culvert set-ups or timber bridges, all to let the river flow more as nature intended. 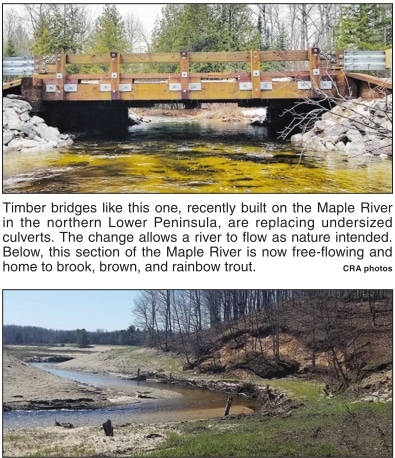 “It’s quite an awesome project,” Chris Pierce said. For 17 years, Pierce has been CRA’s project manager for the Maple River work (and one of four project managers on CRA’s staff). He said the project is unusual in that it constitutes a “stem-to-stem” restoration of the river’s original free-running nature.

That, he said, provides aquatic organism passage, what’s often called “connectivity,” and means the river is functioning properly again, clear and at the cold water temperatures that trout require.

The Maple’s watershed in northern Emmet and northwestern Cheboygan counties includes 148,000 acres, about 231 square miles, with a total of 53 river miles.

The wetland-fed West Branch is cold and high quality, while the East Branch, which flows out of Douglas Lake, is warmer. CRA calls the Maple “one of the few places where you can catch brook, brown, and rainbow trout all in the same stream,” and “an angler’s haven.”

Pierce called “the pinnacle of the project” the removal in 2018 of a dam forming the 46-acre Lake Kathleen from the merged waters of the Maple’s West and East branches. Pierce called that dam the “watershed’s most damaging barrier.”

CRA said a dam was first at the confluence of the two tributaries in 1884. It failed in 1952, was rebuilt as a hydropower facility, and reconstructed in 1967 as a recreational dam, as part of a projected development that never occurred.

Pierce said studies found that the impoundment warmed the river’s water by seven degrees, a danger to trout in midsummer.

“Fortunately there’s a lot of groundwater influx (into the river), so there was quick recovery” once the pond was removed.

Work at the pond site has included restoration of 15 acres of wetlands. A “sand trap” sediment collecting facility is still in operation.

It’s fairly easy to see how a dam alters a river, pooling water behind it to warm, collecting river-borne sediments, and blocking movement of plants and animals, including fish, through the system.

But road crossings pose challenges, too, especially those that feature culverts, not always sized correctly and prone to plugging and other issues.

Turbulent waters at culvert outflows can scour out pools and leave the bottom of the tube above water level at various points through the year – a jumping obstacle most species can’t overcome.

The opening might be insufficient to handle high water volumes, too, backing up waters into flood conditions that can, in turn, cause road damage and other erosion.

Crossings are improved by replacing undersize culverts with larger or multiple ones, or with bridges whose spans let the river flow unimpeded, no matter the flow level. Timber bridges, with lifespans projected at 100 years-plus, are often used.

(Timber bridges not only frees movement for plants, insects, fish and other animals, but make easier access and passage for anglers, kayakers, canoeists and other human users of the river.)

Reconnecting watersheds is “the first step to tackling each and every watershed with the same approach,” says CRA, noting that a similar but smaller and not stem-to-stern project has taken place on the nearby Carp Lake River, a few miles north of the Maple.