Thoughts from the old deer stand

Another Wisconsin gun deer season has been completed.

Things seemed pretty quiet for the nine-day hunt here in Washburn County, but the DNR’s preliminary report says the Northern Forest Region was up about 15% from 2021. Deer hunting is much more than numbers and stats. It is the chance to be outside to enjoy the sights and sounds of nature.

For my part, the hunt was uneventful. I’ve talked to others who thought it was the greatest hunt ever. A kid getting his first button buck may be just as excited as a seasoned hunter getting the trophy of a lifetime.

Everybody has their own perspective. 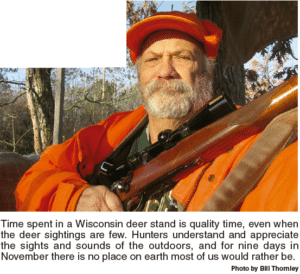 While going back to my stand on opening day, my eyes adjusting as best they could to the darkness, I heard a deer walking. I froze. It continued coming. But the wind was wrong, and it smelled me. Its head shot up and it bolted. It was a decent buck. Had I been a few minutes earlier he might have crossed right in front of my stand, but such is the luck of deer hunting.

The wind really picked up a little after sunrise, and snow began. I poured a cup of hot coffee from my Thermos and settled in for the long haul. A pair of low flying swans flew over, raising a ruckus. I love that trumpeting sound. They were the only living things I saw, save for a couple of goofy squirrels.

There was no glorious sunrise this year, just an overcast sky when it wasn’t snowing. The wind was relentless. As opening day went on I could occasionally hear the sounds of the world going on around me – distant chain saws, a tractor, a barking dog, a crowing rooster, the cackle of crows. From the nearby lake I could hear dozens of swans and geese. But no deer.

Day 2 was mild and the wind was down. I even wrote down a few “Deer Diary” entries …

7:39 a.m. The sun breaks through as the sound of distant geese is heard.

7:50 a.m. I hear footsteps from the south as a small doe wanders through.

8:18 a.m. Four does and fawns wander through. Steam rises from my coffee cup into the crisp air as I munch on a peanut butter and jelly sandwich. On the deer stand, it’s a meal fit for a king.

8:30 a.m. A ruffed grouse explodes out of the brush. An owl hoots nearby. A small doe wanders through. The wind carries my scent right to her, and she snorts and bounds away. You can’t fool the nose of a deer.

9:14 a.m. Across the creek I can hear the sound of an old-fashioned deer drive taking place. I didn’t even know folks did that anymore. I can remember such drives from my youth, when it was a common method of hunting. There was usually a guy whooping and clapping, a guy with a whistle, maybe a kid yelling. Sometimes, we even had Grandma out there beating on a pot with a wooden spoon!

By the last day it’s quiet.

The hunt is almost over.

6:07 a.m. Out in the stand early for a final push. The sun eventually lights up the eastern horizon with that dark orange glow. The little pond in front of me that was open just a few days before is frozen now. Winter has arrived.

9:06 a.m. Turkeys! Six of the birds come through the woods single file, their heads bobbing up and down. The front bird stops suddenly, and the rest pile right into it, tumbling, almost comically, onto the forest floor. Funny and welcome relief from the quiet final morning.

9:21 a.m. All during the time in the stand flock after flock of swans and geese have been flying overhead. I can hear the deep trumpet sound of tundra swans on the water of the small pond just over the hill, and as they take off, the sound of their powerful wings beating the surface of the water fills the air. Simply glorious!

Finally, something moving in the woods. The little red monster discovers me and scolds me for the next 20 minutes.

11 a.m. The feeling is totally different than it was just a week before. I entered the woods opening day with eagerness, excitement, and anticipation. Now there is almost a melancholy feel. I know my hunt is finished.

Noon. My deer season has ended. It is never easy to leave the woods.

And so it went. No complaints, though. I consider myself lucky to be able to walk out to the woods and experience a few incredible days of nature. Even snowy, cold, windy nature is a blessing.

So now the blaze orange is washed and put away for another year. The rifle is back in storage, and plans for fixing up the old stand for next season are now running through my mind.

It’s going to be a long time until the next opening morning. But it will be worth the wait; it always is.

And God willing, I’ll be out there again with a full Thermos of hot coffee, my trusty rifle, and more hopes and dreams of a great deer hunting season.