Home » Wisconsin » Christine gets the boot(s)!

“I have never experienced such a wonderful/ awful day in my life,” I said while sitting on my cot in a canvas wall tent in the Selway- Bitterroot Wilderness Area.

Tears were streaming down.

I was physically and emotionally exhausted.

It was the first hunting day of a 10-day Idaho elk hunt that I had taken with my husband, Stan Thomas, and our Michigan friend, Jim Empson. As an aside, the story of the hunt first appeared in Bugle Magazine and later as a chapter in my book, Becoming an Outdoors Woman: My Outdoor Adventure. My friend, Pat Durkin, helped me with advice and editing of my first popular hunting manuscript. For purposes of this column, I am going to focus mainly on the aspects related to boots. 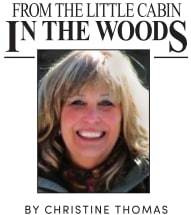 Why boots? Well, most of the challenging aspects of the hunt were related to boots. You may recall an earlier column this fall, where I told you about my first snow-filled outing with Stan. This is the one where I hiked into Uncle Harry’s Devil’s Bend cabin with inappropriate footwear. Soon after our marriage in December of 1972 (yes, this is the golden anniversary), Stan bought me a pair of pac boots. I wore these for two decades for snowshoeing, ice fishing, and various other activities on the mainly flat terrain of Michigan and central Wisconsin. In preparation for the elk hunt, I replaced those old boots with a new pair that was similar. I think the new ones had Vibram soles that I thought would come in handy in the mountainous environment. Wrong! They were great boots. They were just not my best choice for the conditions we were about to experience.

The first day of the trip was mainly devoted to the three hour horseback
ride into the wilderness area. I am not sure of the distance, but 12
miles sticks in my mind. We entered the wilderness at the Twin Lakes
trailhead and climbed over Lost Horse Pass. At one point in our life
together, Stan and I raised horses. My horse skills were adequate.
However, by 1991, it had been four years since I had ridden regularly.
The long ride over steep terrain left knees and rear in sore condition.

So, at 0-dark-thirty the next morning, I was feeling every inch of those 12
miles, as I rolled out of my sleeping bag and ventured out of the tent
under an explosion of stars that punctuated a minus 10-degree morning.

The step up into the stirrup, the leg swing over the saddle, and the
settling of my throbbing butt onto cold leather portended a long,
grueling day.

We were hunting one-on-one, which meant that we each had our own guide and would
go our separate ways during the hunt. My guide was the outfitter, Dave
Hettinger. We started by riding out from camp. The plan was to find a likely spot to
glass for elk. We spent the morning doing just that. This proved to be a
real trial for me.

The elevation in the Selway is not that high,
nothing like the 10,000-foot challenges I have experienced in Colorado.
However, the slopes were steep. Since the ground was covered in a
blanket of snow, we could not see many of the rocks that presented
slippery hazards to walking progress. I would take two or three steps
and fall. The energy it took to constantly pull myself back up was
draining. This went on all morning.

Finally, we stopped for lunch.

This is when I regretted having only ordered one sandwich. That did not
happen again. As we rested below a rock face enjoying the respite, Dave
broke the silence.

“It’s your boots. They are great for your Wisconsin applications, but not for out here.

Dave showed me the soles of his boots, which were covered by black, rubbery
knobs. He shared that all the guides and outfitters wore them. They were
knee-high pac boots with leather uppers and rubberized lowers. They
looked heavy and stiff.

However, Dave was not falling, and I was.

At this point in the conversation, Dave pointed to the rock ledge above
us. That was when the most wonderful part of the day happened. A herd of
mountain goats fed along a trail that must have followed that ledge.
Their fluffy, white coats sparkled in the bright afternoon sun.

The hunter’s eye becomes attuned to the habitat and the animals that you
evolve with in your experiences. Your brain automatically identifies
what you see with small bits of information – the pattern of a grouse
tail in the tag alders, the flick of a white tail in the aspen thicket.
Unless you are planning to pull the trigger, you do not have to think
about it. You just know. You have a “good eye.” In this new and foreign environment, your
“eye” is confused. Your brain is forced to deal with shapes, colors, and
movements it has never seen before. My first response to the goats was
that they were not real. However, they were real. I was in awe.

And as awestruck as I was, I was still facing a long walk and ride back to
camp at the end of the day. When we finally made it back, my legs would
not support my weight in the dismount from my horse. Hence the tears in
my tent. When I removed my long underwear, I could see evidence of the
day’s events. I was bruised from my waist to my ankles.

A year later, as we approached our wedding anniversary, Stan phoned the Schnee Boot Company in Bozeman, Mont.

“I would like to buy a pair of pac boots with air bob soles that will fit
my wife,” he told the salesman. “I need them in two weeks. They are a
20th wedding anniversary gift.”

“Let me get this straight,” the guy on the other end said incredulously.
“You are getting your wife pac boots for your 20th anniversary?”

This guy obviously subscribes to the “Code of the Dudes.” He undoubtedly
knew that the 20th is the fine china or emeralds anniversary, and that
pac boot anniversaries are nowhere on the list. At the risk of a sale,
he was looking out for his fellow dude.

Undaunted, Stan persevered, “Yes, I know. It would take a really good woman to deserve these boots after only 20 years.”

Thirty years later, I am still wearing these boots. I will never need another
pair. They will live longer than I do. I am lucky to have a partner with
whom I have shared so many wonderful adventures, who taught me so much,
and who gave me the confidence to venture out personally and
professionally.

The best possible golden anniversary gift would be more years of outdoor
adventure. I wonder if we could manage an elk hunt for our diamond
jubilee.