Laurel, Md. — Since the bobcat season was first relaunched in Illinois, Jennifer Kuroda has annually lined up for one of the permits the state issues each year – with no plans to hunt or trap a bobcat.

Like many actual trappers and hunters who would actively pursue a bobcat with the permit, Kuroda has gone empty handed.

Her plan was to not use the permit, a token of her anti-bobcat hunting campaign.

“I have applied for a permit not to use since the very beginning, and I’ve never received one,” said Kuroda, who started the Illinois Bobcat Foundation in 2016. “So the odds are unlikely, but I still feel it’s a method for me to be involved and have a voice in the conservation of bobcats.” 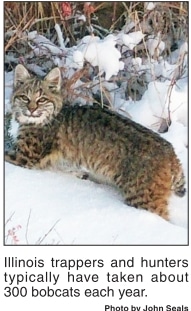 In October, for the first time since the season opened in the state back in 2016, Kuroda was surprised with a notification from DNR that she had received one of the Illinois bobcat permits.

“So yeah, it says lottery winner, like the subject line says ‘lottery winner,’ and then it says, ‘Jennifer, congratulations,’” Kuroda said. “The bobcat hunting drawing 2022 is complete, you are successful in being issued a permit.”

Kuroda, an outspoken critic of the state’s bobcat season, said she understands that bobcats are one of the most adaptable mammals on the continent.

“There’s definitely not any concern for the status of bobcats in the United States right now,” she said. “But do we need to hunt them?”

Nationally, DNR has earned praise for its conservative approach to the season. So far, the state has hosted six hunting seasons and hunters have killed more than 1,600 bobcats. Stan McTaggart, a DNR biologist who once managed the furbearer program, said that the lottery for hunting permits limits the number that get killed.

“We usually get about 6,000 applications per 1,000 permits,” McTaggart said, “so your chances of success are pretty low. But that kind of spreads out the pressure on bobcats.”

McTaggart said the number in Illinois is just north of 300 bobcats annually. Even after six seasons, McTaggart said that the state is confident that the population of bobcats is increasing.

“Our surveys for bobcats show increasing trends and abundance based on deer hunter surveys and archery deer hunters,” McTaggart said.

Bobcats were hunted to near extinction in parts of the American Midwest. Throughout the 1960s and 1970s, states began putting the bobcat on protected species lists in order to prevent a population collapse.

The bobcat has made a huge comeback, and since the 1990s, hunting for the predator has reopened across the country.

Currently there is no population estimate of the number of bobcats in Illinois, and the entire northeast quadrant of the state is off limits to bobcat trappers and hunters.

Some counties are cut right down the middle, where hunting is allowed on one side but not the other.