For many sportsmen and women in north-central Minnesota, hunting deer is a fall tradition that’s existed for decades. Friends and family members gather during early November to climb trees, swap stories, revel in past hunting successes, and renew their excitement about the prospects of generating new tales to tell.

Historically, the future of deer hunting in north-central Minnesota largely has been taken for granted, but that picture changed last year when chronic wasting disease was brought to the Bemidji area via deer transported to a cervid farm near Hines. This fall, hunters
in Deer Permit Area 184 suffered another blow when a mature buck harvested during the firearms season tested positive for CWD.

And it now appears that a second deer shot in DPA 184 also is likely to have been infected with CWD, according to Blane Klemek, DNR northwest region wildlife manager.

“There is a very high likelihood that we will have two (CWD) positives,” Klemek said. “The first deer came from a parcel of private land adjacent to Highway 71 about 10 miles directly south of Bemidji, and the test result of another deer that was harvested near the same area came back as CWD-suspect. Those test results will be later confirmed through more tests.”

No one knows if there is a connection between the CWD-infected deer south of Bemidji
and the deer farm near Hines. Geographically, it seems a unlikely, but
anything is possible in nature. 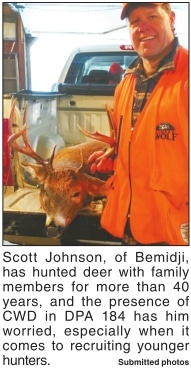 “When you think about where a (CWD-positive deer) might be in DPA 184, you would think it would be around the deer farm (25 miles northeast of Bemidji). But, obviously, that’s not the case. These (wild, infected) animals are 10 miles south of Bemidji,” Klemek said. “It’s true that mature bucks can travel great distances. That’s their behavior. But to think that one particular buck traveled all that distance from the Hines area, although not impossible, might be a stretch. CWD can be spread in
all kinds of ways, and we’re still trying to figure that out.

“We have no idea how (CWD made it to this location), and that is something we might not ever know. But it’s a shock and it’s a disappointment that we found it south of Bemidji,” he said.

In an attempt to better understand the opponent, DNR Wildlife officials
seek to test more deer in DPA 184 for the presence of CWD and are asking
hunters to participate in that endeavor. The department’s CWD response
includes a late-season hunting option, and this weekend (Dec. 16-18)
hunters are urged to hit the woods, harvest more deer, and have them
tested for CWD. During the opening weekend of the firearms season,
hunters also submitted deer for testing, but success was relatively poor
during that timeframe and DNR officials fell short of their goal of
1,800 samples. Fewer than 800 samples have been tested in DPA 184 to
date.

“This special hunt is just designed to increase our sample size,” Klemek said. “We
need more samples to help us determine the prevalence rate of the
disease in the deer population. The more samples you get, the better,
and this type of hunt can be very beneficial in helping us obtain more
samples and test them.”

Among the DPA 184 hunters happy to help are Bill Pirkl and his daughters,
Ashley and Hayden. Pirkl is especially eager to learn about CWD’s
possible foothold south of Bemidji because his family lives and deer
hunts about three miles from where this fall’s infected deer (and the
suspect deer) was harvested.

“Having those deer with CWD certainly gets the mind going,” Pirkl said. “How did they get it? What was the cause?

“Does it change my perspective about deer hunting? Maybe, a little bit,” he said. “But I put my faith in science. I’m a scientist myself. We have to go with what the experts are
telling us, and they are saying that there is no issue with human
consumption. There may be a little bit of hesitancy, but I think the
good outweighs the bad and we are excited to get back in the stands again. It will be a fun experience.”

Scott Johnson has hunted with family members for more than 40 years about 20 miles northwest of Bemidji. Most of the land they hunt is owned by the family, and the hunting party usually targets mature bucks.

“We like to look for trophies, but we will shoot a doe or a small buck here or there,” Johnson said. “This season, the five of us saw some deer and we passed on some small bucks, does, and fawns. But in the last five years, I’ve noticed a decrease in the herd.”

The weekend of the special hunt is a busy one for Johnson, but he said he hopes to be able to find time for a day or two of hunting.

“It’s nice having an extended season, but it’s too bad that we have to have
one under these circumstances,” he said. “I’m worried about CWD. I don’t
know that much about it, and I guess it isn’t dangerous to humans, but I
wish it wasn’t here. I love deer hunting, and I hope that there will
still be opportunities to hunt despite the presence of CWD, especially
for the younger hunters.

Doug Hood, of Bemidji, has spent his fair share of time in the deer stand and he said he’s worried about the sport’s future.

“I enjoy deer hunting and have missed only one year of hunting since 1969.
That was in 1971 when there was no season,” Hood said. “The worst of
CWD is probably a few years away yet, but even so, it’s a major concern.
Deer hunting is a way of life up here. It is a tradition for many
people, and I don’t want to see that tradition lost because of CWD.

“I’m not worried for myself. I’m 80 years old and who knows how long I will
be around,” Hood continued. “But I am worried for the younger hunters.
If we didn’t have deer up here, it would be a terrible situation.”

Hood also would like to see the deer farm in Minnesota become a thing of the past.

“I think the deer farms have to go,” he said.

“There are too many deer in one place. If one has CWD and gets out, the
disease is spread all around. I absolutely would be in favor of a total
ban of them in the state.”

Johnson said he’d be in favor of tougher regulations for that cervid-farming industry.

“I really think the deer farms need to be better regulated and (the rules
for them) need to be more restrictive, especially when it comes to
transporting deer,” he said. “I think deer farms are a big reason why
CWD is spreading. People who have these deer farms really need to know
what CWD is, their animals should (constantly) be tested, and they
shouldn’t be able to move the deer from one place to the next. And I
think if you talked to most hunters, they would say the same thing.”

Klemek said he’s hoping that hunters in DPA 184 take advantage of the extra
management season. If enough samples are obtained, additional methods of
gathering samples may not be necessary.

“Using sharpshooters (targeted culling) is not something that is planned, but
it is an option,” Klemek said. “That option has been used in the past in
some of the southeast hunts, largely when the late-season hunt wasn’t
very successful and didn’t provide us with enough samples. If the sample
size (from this weekend’s special hunt) is high, and the target sample
size that, based on statistics, our wildlife health program staff have
recommended is met, there would be no need for additional deer (to be
harvested and sampled).”