Home » Features » A visit to a one-time great deer stand

A visit to a one-time great deer stand

Only the faint glow of the morning sun through the clouds and my compass told me I was walking in the right direction.

Fallen timber, thick spruce, hazelbrush, and tag alders discouraged every step. But soon I recognized a slight trail, and just ahead a hand-written wooden sign cut in the shape of an arrow and nailed to a red pine confirmed the path. It read: “Grandpa’s Stand 1⁄2-mile.”

I was close to the deer stand known as “Charlie’s Diamond.” For the rest of the journey, I knew I would be treading on hallowed ground.

My search for Charlie’s Diamond started when a friend told me about taking his son to visit the deer stand that had been used by his grandfather many years ago. In fact, they had jumped a nice buck while walking the long ridge that leads to the stand. Hidden in a national forest, the stand is located a short distance from a 40-acre parcel his grandfather once owned. The parcel remains in the family to this day.

My friend, who is named Charlie after his grandfather, told me the stand was “money” back in the day.

But there is something else that made the place magical to those who once hunted it and still does for those alive today who know of it. A large chunk of shiny quartz deposited by a glacier sits in front of the stand, and it’s the reason the site was known as “Charlie’s Diamond.”

It was something I had to see.

After turning at the sign, the trail ran along the top of a north/south ridge covered by red pine on the sides and small balsam fir on top. I had not walked far when I realized I was the second to use the route during the past few hours.
A large bear had wandered through shortly after it had started to snow
the previous night. Moseying along so I could take everything in, I
spotted a wide beaver meadow ahead of me and saw that the ridge bent
back to the east. This is where I would find Charlie’s Diamond.

Overhead, a gray jay – which Charlie probably would have called a whisky jack –
flitted from branch to branch. I stood for a moment, assessing the spot
through the eyes of a deer hunter. At the base of the ridge, a small,
pine-laden extension protruded into the meadow. If I were hunting the
spot, that is where I would sit. I eased my way down the ridge.

And that’s when I saw it. A green metal chair, showing about as much rust
as paint, sat slightly askew behind a large red pine. I had found
Charlie’s Diamond. 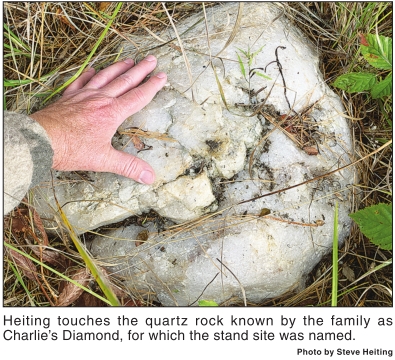 Charlie had chosen the spot well. The extension sat slightly higher than the meadow and the creek bottom, and offered a commanding view of both. To the left, a saddle in the ridge would funnel any deer traveling through the area, and was well within
rifle range.

The red pine in front of the chair and a couple of white
pines behind and to its left would have been much smaller in Charlie’s
day, and together would have formed a natural blind. No buck wandering
through would have known Charlie was there until it was too late.

Next, I had to find the quartz for which the stand was named. My friend said that in wet years, it would be under the surface of the beaver pond. But with the water being low, I
was hopeful. I had taken but a few steps when I found the rock maybe 30
feet in front of the metal chair. Only about 2 feet across, it would
have been easy to miss in the marsh grass had I not been looking for it.

With that out of the way, I was back to being a deer hunter. I followed an
old game trail to the saddle to check for deer activity, but found only
the tracks of a fisher in the new snow. The lack of deer sign was disappointing, but in this day of aging northern forests and a heavy predator load, I wasn’t surprised.

In Charlie’s day, northern Wisconsin had younger timber, lots more deer,
and the state paid a bounty on wolves. And, as explained by Charlie (the
grandson), the beaver meadow had replaced a swamp that offered cover to
hunted deer, giving them another reason to walk that way. 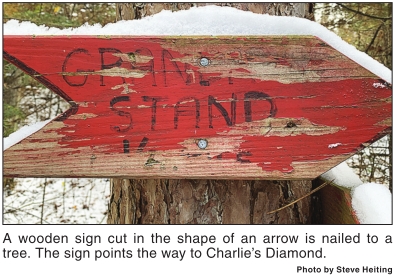 As I took photos of the stand, I saw that I had cell phone service, so I
called my friend and thanked him for telling me about this place.

“Spots like this are sacred,” I said. “It was special for your grandfather and his hunting buddies, and it obviously remains so for your family. I really appreciate that you shared it with me.”

Eventually I had to leave, but not before I touched the rock and the metal chair, and wished its owner Godspeed.

Charlie may be long gone, but his “diamond” remains, as do the landforms that
made his deer stand such a natural. The site has been like this for
thousands of years and, being hidden in the national forest, will likely
remain much the same for thousands more.

Maybe the deer population will rebound in the area someday and the stand will
be found by another hunter who will create a new legacy there.

But for now, the place is known as Charlie’s Diamond, and will be for a long, long time.