Path to certifying record smallmouth quite a process

Sandusky, Ohio — Travis Hartman counts himself fortunate to be a witness to one of the largest smallmouth bass ever caught by an angler.

“As you might imagine, we get a handful of calls every year about ‘a big one’ being caught and it possibly being a new state record, regardless of the species,” said Hartman, Lake Erie program administrator for the ODNR Division of Wildlife. “So, you get a little numb to it because almost none of them turn into a true giant that is a record contender.”

So, the call Hartman fielded from renowned Lake Erie fishing guide Ross Robertson in early November about an angler still on the water who had caught a big smallmouth didn’t immediately trip Hartman’s trigger.

“So, I asked Ross ‘how big’? and he just said ‘Really big,’” Hartman remembers. “And, I knew Ross wouldn’t be calling me if he didn’t think it was credible.”

Robertson reported that on Gregg Gallagher and Grant Gallagher’s onboard scale the fish weighed more than 9 pounds and that the Fremont father-and-son team believed their scale weighed light.

“So, that was noteworthy,” said Hartman, now fully invested in looking into the matter.

Robertson relayed that the smallmouth bass was caught in Ontario waters of Lake Erie. So, Hartman’s next move was to familiarize himself with that Canadian province’s fishing records.

“This whole time I’m thinking, ‘This is a big smallmouth, there’s no doubt about it,’” Hartman said. “But, we’ll see when we get it to a certified scale.”

Hartman’s next step was to contact fishery biologists in Ontario to apprise them of the potential record-breaker in their jurisdiction.

“My first question was if there was a way to bring (the fish) back to Ohio to certify it,” he said. “I was really impressed on how quickly Ontario was getting back to me and they put me in touch with the people at OFAH (Ontario Federation of Anglers and Hunters).”

Just as it is done in Ohio, Ontario has an independent, non-profit membership organization that certifies and consolidates the province’s hunting and fishing records. The Outdoor Writers of Ohio certifies all fishing records in Ohio.

“So, right away I was able to find out that if this indeed is a record there is a path to certifying it here in Ohio,” Hartman said.

That was the first step in the process.

Meanwhile, the Gallaghers had made it to Port Clinton Fish to meet up with Robertson and a certified scale.

“(Robertson) calls and he said, ‘Man, it’s 10.15 (pounds),’” Hartman recalled. “I was pretty blown away. So, I told (Robertson) to make sure to get every picture of the fish on the scale with the weight showing, the certification sticker on the scale, everything.”

The Gallaghers, Gregg (father) and Grant (son) and Robertson took their time documenting everything before traveling with the fish to the Division of Wildlife’s Lake Erie fisheries headquarters in Sandusky.

Hartman had already downloaded the appropriate documents needed from Ontario and had spoken with ministry fisheries authorities on the matter. He was anxiously awaiting the big fish’s arrival.

“The fish was still in the livewell in the boat and when they pulled into the parking lot with the boat trailered and pulled out that fish I was like ‘Oh, my God,’” Hartman said. “You can’t appreciate the impact something like that has until you see it. I don’t know how many smallmouths we’ve handled between tournaments and our own surveys, but we easily handle hundreds of smallmouths every year. We’ve handled a lot of 6-pound smallmouths from tournaments and in our surveys. Then, this guy pulls out a smallmouth that’s 4 pounds bigger than anything we’ve ever handled. Oh, my goodness. It was the size of a grouper.”

The next steps were to positively identify the fish as a smallmouth bass and to take official measurements.

“It almost defied logic,” Hartman said. “It’s not one of those fish that has a giant gut. This isn’t like a December fish that’s just gorged on shad for two months. And, it’s not a May fish that’s just packed full of eggs.

The girth of the Gallagher smallmouth was 19 3 ⁄8 inches and the majority of that was just the height of the fish, said Hartman.

“It was amazing. You just look at it and think ‘this is a fish like very few people have ever seen,’” he said. “It’s a unicorn.” 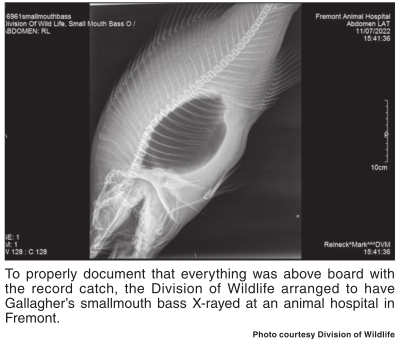 Astonished at what he was seeing, Hartman did some more research and found that there’s never been a smallmouth weighing more than 10 pounds documented on the Great Lakes.

Just for reference, the world record smallmouth bass was just a tad bit over 11 pounds, caught on Dale Hollow Lake on the Kentucky and Tennessee border. That fish is also the record in both of those states.

Other than that fish, there was another 10-pound, 8-ounce smallmouth that was caught in Alabama.

So, the Gallaghers’ smallmouth bass becomes the third largest ever caught and certified in North America.

And, it couldn’t have come at a better time for highlighting Lake Erie, given the recent walleye tournament cheating scandal that gripped national news just recently.

The Ontario officials even referenced that scandal when they politely asked for some validation from Hartman and his crew that this smallmouth was on the up and up.

So, not wanting to cut the fish open in order to preserve it for the mounting process, Hartman suggested an X-Ray to prove there was indeed no foreign objects in the belly of the smallmouth.

One of the Division of Wildlife’s law enforcement officers was able to secure an appointment at the Fremont Animal Hospital to get the fish X-rayed even though there was no suspicion whatsoever that it wasn’t legitimate.

As expected, nothing was amiss.

So, on Tuesday, Nov. 8, Hartman sent a statement to Ontario officials, confirming that everything with Gregg and Grant Gallagher’s smallmouth was legitimate and worthy of record status.

The record was officially certified by Ontario on Nov. 14.

Greg Gallagher plans to have a mold made of the smallmouth for taxidermy purposes and then will turn the fish back over to Ohio’s Lake Erie fishery authorities so they can examine it more thoroughly, Hartman said.

“This is one that 30 years from now there won’t be controversy.

There is no controversy. It was excellent timing, and a good opportunity to highlight what this smallmouth fishery is capable of.”

“We’ll work it up, remove the otoliths (ear bones) for aging, and confirm if it’s a male or female, take some fin clips for genetic purposes,” he said. “I don’t want to be overly dramatic, but we’re still trying to process what we saw.”

And, this is a record that will stand the test of time, Hartman said, which is refreshing.

“This is one that 30 years from now there won’t be controversy,” he said. “ … There is no controversy. It was excellent timing, and a good opportunity to highlight what this smallmouth fishery is capable of.”

The record smallmouth bass on Lake Erie was caught by well known bass angler Randy Van Dam. That 9.5-pound fish remains the Ohio record smallmouth. Gallagher’s heavier catch is the largest smallmouth from Ontario waters and throughout the Great Lakes.

One has to read Gov. Mike DeWine’s statement on the ‘green energy’ bill carefully to parse out the true meaning