When Harold Duebbert, of Fergus Falls, died in January at age 92, the renowned waterfowl biologist, decoy maker, hunter, conservationist, and author left behind an impressive legacy.

Effusive tributes poured in from across North America from former colleagues, waterfowl-conservation officials, friends, and even passing acquaintances who met him at public meetings. He was universally celebrated as being part of the “greatest generation” of waterfowl biologists at the Northern Prairie Wildlife Research Center in Jamestown, N.D. – research scientists who literally wrote the book about the needs of waterfowl across the Prairie Pothole Region.

Duebbert was hailed for his 2003 book, “Wildfowling in Dakota: 1873-1903,” an exploration of one the great eras of waterfowl hunting in North America. He was extolled as a good and generous man who wasn’t afraid to speak his mind – loudly, if need be, for the causes – typically centered around prairie wetlands and grasslands in North Dakota and beyond – he held dear.

That’s because a book manuscript, hidden away for years in a wooden box in Duebbert’s office, had gone unpublished. The manuscript (which was also on a computer disc) showcased Duebbert’s handwritten hunting journals over an extraordinary length of time: from 1954 to 2009. Primarily during the past year, the foursome helped finish Duebbert’s book, “My Life Among Waterfowl: Hunter, Decoy Maker, Wildlife Biologist.”

“It had to be done,” Pearson, 83, the project’s executive editor, said of completing the book, which began shortly before Duebbert passed away. Pearson first met Duebbert in 1967, when he took a job at Northern Prairie.

“We fully expected to be able to put a copy in his hand. It’s very disappointing – more bitter than sweet – that he didn’t get to see the final product. But there was never a question we weren’t going to get it done, even after he passed away,” Pearson said.

A Missouri native who learned to hunt ducks as a young boy on the river bottoms of the Missouri River, Duebbert began writing the book in the spring of 2004 and drafted the majority of the text before health problems effectively ended his work on the manuscript in 2009. When Pearson and company decided to finish the book, much work still needed to be done. Some sections were incomplete, and many details – from structuring the book to sourcing photos, among other tasks large and small – needed to be addressed.

“It was something we all agreed we wanted to be a part of and push over the finish line,” said Piehl, one of the book’s copy editors. “It was an honor to be Harold’s friend and an honor to help with the book.”

The final product includes extensive excerpts from Duebbert’s copiously detailed hunting journals and his many publications in professional periodicals as an accomplished waterfowl biologist. The hardcover book has more than 150 photos of Duebbert’s duck, goose, and sandhill crane hunting, primarily in North Dakota and Saskatchewan. Many photos showcase his handmade wooden decoys, which he spent hours shaping and meticulously painting with intricate feather patterns.

“There were a lot of moving parts,” Pearson said. “Harold’s wife, June, graciously allowed us to search through Harold’s office and files for pictures and other information needed to complete the book.”

Serie first meet Duebbert after graduating from college at St. Cloud University in the late 1960s. That’s when Serie, who retired from the U.S. Fish and Wildlife Service in 2007, took a job at Northern Prairie. They became fast friends, hunting several times over the years.

“Harold was a well-established biologist
at the time who was recognized by his peers for his ground-breaking
research,” Serie said. “He was a dear friend and mentor to me.”

Serie said Duebbert was an “old-school waterfowler and romanticist” who had
particular preferences and exacting standards. He preferred to hunt
ducks in shallow wetlands, typically off a point. He hunted mostly out
of small duck boat he built in 1962, and preferred (as he got older) to
hunt over his handmade wooden decoys.

He eschewed modern waterfowling’s dizzying array of new gear and clothing
options, instead opting for his traditional canvas hunting coat, rubber
hip boots, and Elmer Fudd-style hat. He shot an L.C. Smith 12-gauge
shotgun. He was endlessly patient and would sit in a marsh for hours,
waiting for a flight of ducks. If the hunting was good, Duebbert wasn’t
shy about taking chances. He readily hunted in snowstorms amid the
prairie’s gale-force winds. The payoff: plucking a limit of ducks.

“Hunting with Harold was always fun, educational, and a special treat,” Serie
said. “He was very particular about who he hunted with – usually only
one or two others that he knew and respected. He liked to be with
certain people who shared his ideas about the mystique and awe of
traditional wildfowling. He usually picked a place he knew well based on
prior experience and general knowledge. He was very set in his ways
about setting the decoys – usually in very close. He didn’t take long
shots and mostly decoyed singles, and small groups, and didn’t call
much. He let the birds see the decoys and come in close.” 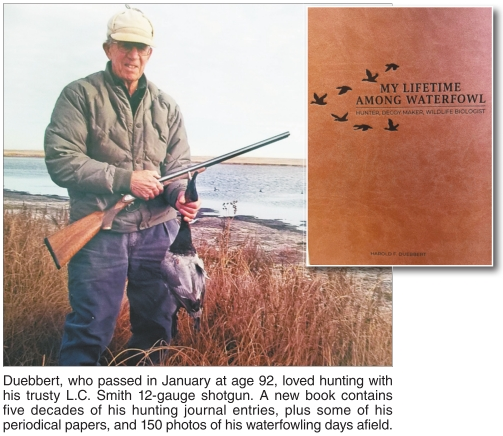 Unlike most modern waterfowlers, Serie said, Duebbert preferred to hunt alone
and “was right at home in his own world” when he did. “I think he
liked the independence of hunting alone and not being compromised with
ideas from other people,” said Serie, who described Duebbert as being
“extremely well-read and intensely curious.”

Hunting alone, Serie said, allowed Duebbert to be a keen observer of the
prairie environment and its bird life that he dearly loved and with
which was he endlessly fascinated. He chronicled those observations in
his hunting journals over more than 50 years.

“…waterfowl hunting was the quintessential vehicle that gave him
important perspective, deeper understanding, and an appreciation that
shaped his life’s devotions and philosophies,” Serie wrote in the book’s
Foreword.

Above all, Serie said, Duebbert’s journals were a way for him to “preserve memory.”

“He didn’t want to trust his memory and wanted to relive his experiences
for later recall and remembrances,” Serie said. “His journals were much
more than the number of birds taken on a particular hunt. They’re more
like a timeline of events and experiences, the emotions he felt, the
appreciation he had for the prairies, and the respect he had for the
birds he hunted. Every entry paints a vivid image of where and what he
experienced. And he did that over five decades, which is astonishing.”

Like Pearson, Serie believes the book has mass appeal.

“I think the book will appeal to a wide group of waterfowl hunters,
naturalists, and decoy carvers who have a fascination with wildfowling
history and the story of one man’s lifetime journey,” he said. “Harold
was a rather unique individual, but I think many people can relate or
know someone like him in spite of the fact that today’s waterfowl
hunters and hunting style are not anything like Harold’s. For me, it’s
very satisfying to see Harold’s book come to life as it has.”

Pearson said he believes the book serves a larger purpose – the perfect coda,
if you will, to Duebbert’s life, and career, lived in full as
waterfowler, biologist, and decoy maker.

“In my opinion, the book presents one of the single best cases available
in support of protecting wetlands and grasslands … for waterfowl in the
northern prairies,” Pearson said. “Harold’s book, through his hunting
journals, illustrates what we had and what we’ve now lost and what we
need to preserve.”