Across much of the northern ice belt, the hard-water season has arrived. Whether you’re ready or not, it’s here!

The early ice-fishing season is a special time of year.

While many folks wait to fish until there’s enough ice for driving, the anglers who venture out on foot early can take advantage of some of the best bites of the year.

At first ice, shallow areas still often are full of life – and thankfully for ice anglers, these are most often the first areas to freeze. 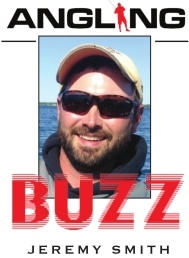 In my opinion, one of the most common mistakes that ice anglers make is heading too deep, too early. There’s no doubt that fish are swimming on deeper structure or roaming basins, but anglers are walking over a lot of premium fish real estate to access these areas.

My focus during the early season revolves almost entirely around shallow bays. I spend the majority of my time in 6 to 10 feet of water and on the search for healthy vegetation.

Vegetation is one of the biggest factors that dictates fish location during this timeframe. Anyone who’s spent any time reading about early ice bites has heard about the importance of finding green weeds. My experiences,
however, have shown that tracking down vertical standing weeds is even more critical.

Early-season vegetation bites are some of the most consistent bites you’ll find
throughout the season. It can, however, require some serious legwork to
uncover these prime spots, especially on large flats with consistent
weed growth.

If you want to know if weeds are green and standing or if fish in are in the area, an underwater camera will tell you just that.

That being said, technological advancements, like forward-facing sonar, drastically have
changed the ice-scouting game. For example, Humminbird’s Mega Live
allows anglers to see 100 feet or more in any direction and quickly
locate fish, pockets, and edges of weeds. That means drilling fewer
holes than ever before.

Early in the season, most areas are limited to foot traffic only. As a
result, one of the best pieces of advice is to pack light. It’s easy to
overpack, but it doesn’t require a lot of gear to catch fish, especially
this time of year. 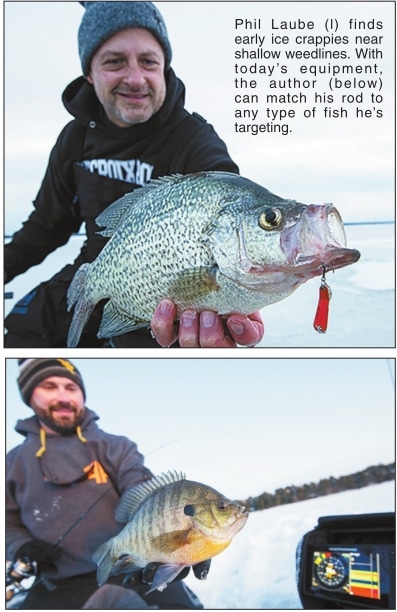 My early-season arsenal consists of a few rods, some tackle, a
Strikemaster 24V, a Helix 7, and an underwater camera. Because my early ice pursuits are dominated primarily by panfish – crappies and bluegills in particular – I pick my gear accordingly. When it comes to rods, I employ two models in the 26- to 32-inch range – a light power and
medium-light power.

It wouldn’t be fair to discuss early ice and not mention ice safety.
Safety should always be a consideration, but it’s particularly important at first ice. Precautionary measures such as spud bars, ice picks, cleats, and flotation are vital tools to make sure you have a safe and enjoyable experience.

I’ll admit that I was skeptical of float suits at first, but continuous
improvements have made them more comfortable and useful than ever
before. It’s also important to remember that first ice isn’t the best
time to explore to new bodies of water. You’re far better off heading to
familiar locations – and don’t forget to bring a buddy.

For ice anglers, this time of year is hard to beat. Anticipation runs high
and fish are pretty cooperative. Focus on the shallow stuff, remember to
pack to light, implement the appropriate safety measures, and enjoy
yourself on the ice.