Home » Features » Reader stories: A bad day of hunting is better than…

Reader stories: A bad day of hunting is better than…

Wow. What a day in the woods.

Driving home from my family’s property where I do most of my hunting, the events of that morning seemed so far away. I had seen nine deer that morning and I should have had one hanging in my pole building, ready to be skinned and processed. But I had no need to worry about any of that because I had blown my chance. I did not blow it on a huge buck, but the failure still stung. 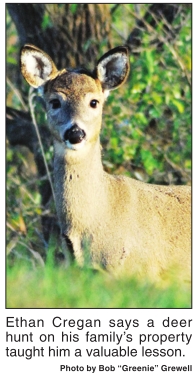 The morning started out on the wrong foot. My friend had driven down to my house the night before to also hunt the next day. About eight minutes into our dark morning drive to the property, I notified him that we needed to turn around because I had left my bow at home. How does one leave the main tool they are supposed to be going hunting with behind? Leave it to me.

A short while later, as I walked my buddy to the treestand he would be sitting in, I took my backpack off to find I had left the front pocket completely unzipped. Luckily, I did not lose anything, but I was definitely not firing on all cylinders that day.

Walking through the woods, the property felt weirdly unfamiliar to me. I was questioning which direction to go when walking to each stand and everything just felt very weird. I still am not sure what was going on with me, but as I settled into my treestand I worried less about why I felt confused. Probably just not enough sleep or something.

The first two hours in the woods were very still. Not much of anything was moving and the woods seemed a bit dead. It was a beautiful October day and the leaves were colorful so I was happy.

I passed time by thinking about life and checking quite often for deer. At sometime around 9 a.m. I heard some leaves crunch behind my left shoulder. I spotted not one but seven does (maybe a button buck or two in there) walking in a perfect line that would bring them around 15 to 20 yards away from me. I was filming my hunt on this particular morning and, although the GoPro strapped to my head was already recording, I stupidly pulled out my phone to get some more footage. Why I did this I question because the footage from my GoPro would have been enough. When I pulled out my phone I struggled to open the camera app.

Moments later, when I realized I should put the phone away because I was about to have a shot, I fumbled with it as I slipped it back into my pocket.

During this commotion, I attracted at least one of the does’ attention, so it was looking at me, wondering what was going on. I felt very stupid at this point for busting myself, but stayed still and hoped I would get a shot at one of the bigger deer.

They soon kept walking, and this part is a bit of a blur, but they knew something was up so I decided I better take a shot soon. I then turned the wrong way to shoot at one of the does that was directly behind my treestand and had to turn back around to get a better angle. I finally drew back to take the shot, but found that I could not because a smaller doe was standing right behind it and if I made a good shot there was a chance I would hit both deer. I stood there at full draw until the deer finally spooked and ran about 10 yards away.

I now had no shots. The deer still lingered and I got one more shot opportunity at a big doe, but passed because I was worried about the yardage. Honestly, I think at that point I was just a bit flustered and talked myself out of the shot. Eventually, the deer continued on until they were out of view. I sat there dumbfounded that I had just screwed up multiple times so blatantly.

Time went on and I texted my buddy to let him know I would be getting out of the woods soon and that I had blown my chance at a deer. Right after I put the phone away I turned to find two more deer in shooting range. A second chance!

The doe of the group came to 20 yards, but soon had eyes on me. I then panicked and drew my bow, which you should never do when a deer is staring right at you. This caused the deer to trot a few more yards away, still in range but now the deer was quartering away so much so that I did not have a shot at the vitals. I waited for it to give me a good look, but when it did I did not collect myself before tapping the trigger on my release. I felt my left arm (my bow-holding arm) jerk left when I released and things looked less than perfect. As the two deer ran off I noticed the doe did not look wounded at all. I felt instant regret for not calming my nerves before taking the shot.

I climbed down, found the arrow with only dirt on it, and trampled out of the woods. Feeling a bit dejected, I relayed the ordeal to my buddy who had only seen a couple of deer that morning, getting no shots. As the day went on, I told of my failures to a few other hunting buddies and slowly started getting over it.

I made it back out to a different stand that evening, but did not see anything. Driving home from the evening sit, I thought about the day. My takeaways were as follows: I should learn from this day and move on. I needed much more practice in shooting my bow. I need to take a deep breath and calm down before pulling the trigger. There was no need to film on my phone when my GoPro was already filming. I had made too many rash movements that day. Last but not least, a bad day of hunting is better than a good day of almost anything else.

As outdoorsmen, when we spend enough time in the wild we will have opportunities to kill healthy deer, land big fish, collect a banded duck, shoot our first elk, and more. Sometimes we will do great in these moments and execute perfectly. Sometimes we will fail. We will miss shots, let the fish get under the boat, and take our eye off the prize. The importance is to learn from these moments and let failure drive us.

We all miss shots. We just have to keep practicing and when the next opportunity arises we will make it count. Happy hunting!