It’s been a few years now since duck hunters, at least this duck hunter, has seen a strong migration of ducks into northwestern Wisconsin. As of this writing, this year’s been another bust except for one brief, glorious morning, but more on that later.

Here’s an example of how tough it’s been. I’ve shot three times more canvasbacks than bluebills, the duck of legends, this fall. Before there’s a rush of canvasback hunters up here, let me add this clarifying point. I’ve shot a total of three cans, so the math on how many bluebills have been shot isn’t too tough. And for the record, those three cans were more than I’ve shot in the last five years combined.

There are reasons for this. One is the North American scaup estimate, the formal name for bluebills, have dropped almost 50% from 8 million birds in 1975 to 4 million in 2017 and, unfortunately, the downward trend has continued. The infestation of zebra mussels on our East Coast also lures bluebills to those waters and away from the north. 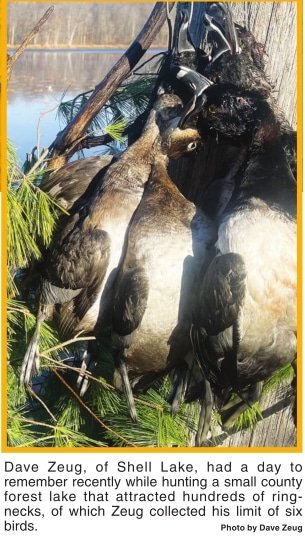 Also, unfortunately, some studies have found contaminants in zebra mussels may be influencing this population change by impacting scaup recruitment.

That’s why my one recent shining moment reminiscent of duck hunts years ago was so rewarding. One reason it worked out is because I did some scouting, and the other is the poor man’s bluebill, also called the ring-neck, is still doing fine. Bluebills and ring-necks are often confused, but while they do have some similarities in flight patterns and coloration, their habitat is quite different. While bluebills are big-water ducks, ring-necks frequent shallow ponds, wild rice lakes, and even big beaver ponds. That’s what makes some of the shallow lakes in public forests an attraction to ringnecks.

I had discovered a few ringnecks on an early-morning hike into several county forest lakes. Not a lot, but with the lack of other options and a cold front pending, I decided to see if I could get into a few of them. The next morning I hauled the duck skiff loaded with a bag of decoys into the backcountry lake and set up off a blunt point, making sure the decoys were a respectful distance from shore, just like in the real world. Actually, I wasn’t expecting them to decoy since the tree line was so close – divers like to see open water around the landing zone – but hoped they would give me a chance when they buzzed the spread.

The day started out quietly.

I hadn’t even had a confirmed sighting after the first hour, but then the sky opened up. The first arrivals were a small knot of four ring-necks that circled the lake. While I watched them make their lap around the lake, I heard a slowly building, jet-like roar. I knew what that meant. Ring-necks. Lots of ring-necks.

A couple dozen, maybe more, blew in from behind at speeds I couldn’t even estimate. They peeled around the lake, then roaring by like fighter jets on a strafing run, they banked over the decoys. I know one of the wing-shooting rules is to pick a target, not flock shoot, but there wasn’t time for that. I swung out ahead of them and slapped the trigger. One bird came down hard, bouncing three times on the water before coming to a stop. Before I could get to the skiff for the retrieve, more flocks zeroed in on the lake and then the decoys. Two quick shots dropped another bird, then the flock disappeared. I took the opportunity to drag the skiff to the water line, but before I could climb into it, more birds arrived. Sitting on the bottom of the skiff, I tried swinging past the next flock, but my cramped position resulted in two more casings laying on the water, but no ducks. I quickly rowed out and picked up the two ducks before the eagle floating above took advantage of the easy pickings. It wouldn’t be the first time I’ve lost ducks to opportunistic eagles.

Back in the brush blind I reloaded. I also realized I should take the opportunity to enjoy the show. There was no need to take hurried shots, because they just kept coming. The paths of two flocks coming from opposite directions met in the equivalent of duck aerial traffic jam. I couldn’t resist taking a shot at one veering over my head, dropping it on the dead oak leaves behind me. That made three in the bag with three more to limit out, something that hasn’t happened in years.

I took my time, picking my shots, missing some and hitting some until I rounded out my limit. The combined flock of maybe 500 ring-necks eventually found a shallow bay at the far end of the lake, clearly a better option for them than closer to me. I gathered my gear, picked up decoys, and the last ducks of the day. Then I headed back home, grateful for a morning to remember.