You’d think that for a guy who has been doing this deer hunting thing since age 12 starting with the 1972 gun deer season, there would be a routine in place – something that would help yours truly be absolutely ready for opening weekend. 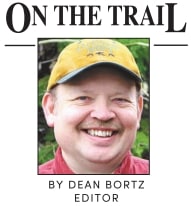 Oh, some years go better than others and a buck might even get shot on opening weekend, or at some point during the season, but when an opener goes off the rails, the years when everything went close to right, are easily forgotten. I am swearing to myself right here and now that for the Wisconsin deer gun season of 2023, I am going to be fully combobulated and ready to go.

That’s because I felt completely discombobulated during this year’s gun opener, with part of that mess being related to the cold weather and stiff winds. All of that when other deer hunters are having great success in the same conditions, according to Kevin Naze’s opening weekend deer harvest report on the front page of this issue.

Obviously, I’m doing something terribly wrong. I’m going to take the advice of
Green Bay Packers Coach Matt LaFleur and turn to a self-scouting process
to see if I can identify where things are going wrong. At least I don’t
have a funky thumb on my trigger hand to worry about, but the way
things have been looking in Ashland County, I won’t have to worry about
getting off a shot. 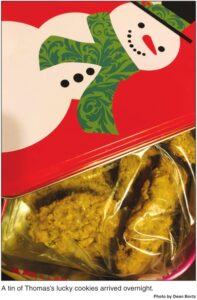 Even Christine Thomas couldn’t help this year. Our popular columnist sent a text the Thursday before the opener that contained
nothing but a photo of a pile of what I knew had to be her world famous
oatmeal raisin chocolate chip cookies. Not just any old cookies, but her
lucky – maybe even magical – chocolate chip cookies, which have been
declared as such by Thomas herself.

I replied thusly, “Geez, I didn’t know you could be so mean.”

Thomas replied, “What’s your address? I’ll send you some of my lucky cookies.”

Of course I was only kidding and told her as much, also saying she didn’t have to ship me any cookies.

But Thomas insisted, and, sure enough, on Friday, Nov. 18, the day before
the gun deer opener, the UPS truck pulled up and the driver dropped off a
package of cookies.

Well, I’ve already told her the cookies failed me – so far. I still have one
left and I’m saving it for the last Saturday of the season, if hunting
is in the cards that day. We have a Celebration of Life to go to that
afternoon, so it would just be a morning hunt.

Or, I’ll save it for the muzzleloader season.

Or, the late bow season.

Or, maybe I’ll have to save it for the 2023 gun deer season opener.

We have so many things on the calendar it’s getting a little tough to
squeeze in any hunting. The calendar lends a lot to this uncomfortable
feeling of discombobulation.

Obviously, though, Thomas’s special cookies do carry some sort of magic, because her son-in-law, Dan Honl, did shoot a schloppus of a buck on opening day in Portage County after eating those lucky cookies. Go to Page 12 in this issue to read
about Honl’s hunt. Maybe it’s quantity over quality. I’ll have to ask
Honl how many of those cookies he ate. And he slept in his hunting blind
the night before the season so he could just roll out, sit up, and
start watching for deer movement. If I do that in 2023, I’m going to
have to double up on Heater Body Suits with a ton of handwarmers because
we don’t have any enclosed hunting stands up north.

Part of my problem comes down to trying to hunt too
many critters in too many places without allowing enough time in between
to catch a breath or get a good night’s sleep. I did find time to
change the oil and filter on the ol’ GMC in mid-October and it’s almost
due for another round – and I use synthetic oil.

You’d think a person would learn by now.

No doubt it was difficult to get too enthused about opening morning when
looking at the forecast. A morning temperature of 8 degrees with winds
about 15 mph out of the northwest? And two of our stands overlook a
powerline right-of-way oriented from southeast to northwest? That can be
brutal on cold and windy days.

But I didn’t even get to enjoy all of that misery. I slept right through
opening morning. Yup. Alarm went off and I didn’t even wiggle. I fell
asleep in the shack loft about 8:30 p.m. Friday night and woke up about
11 p.m. when our third hunter arrived to camp. Try as I might, I
couldn’t get back to sleep once things settled down.

I was still surfing Packers news on my phone at 3 a.m. My alarm did go
off, my brother confirmed that because he had to listen to it while he
was getting dressed, but I didn’t hear thing until him and the other
hunter returned at mid-morning to warm up.

So, yes, I slept right through the 2022 gun deer opener. I didn’t see
anything the rest of Saturday through Monday morning, but my brother did
pass a spike buck each of those three days.

The plan now is to starting pulling my “stuff” together to salvage
something of this season while making a promise to myself to be better
prepared for 2023.