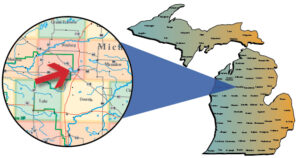 If you’re looking for a Master Angler award and don’t care much about what species it is, head over to Lake Cadillac and drag a nightcrawler around of float a couple leaf worms under a bobber.

Between 2018 and 2019, the last years for which Master Angler awards are listed on the DNR website, no less than 12 bullheads that meet the Master Angler minimum of 14 inches have been caught in Lake Cadillac. They all ranged between 14 and 15.5 inches.

Resting side-by-side with Lake Mitchell – last edition’s featured lake – is 1,150-acre Lake Cadillac. Although Cadillac isn’t nearly as large as Mitchell (2,580 acres) the fishing is just as good as that on it’s larger neighbor.

“Lake Cadillac remains as one of the best and most popular fishing lakes in the northwestern Lower Peninsula with a large, diverse fish population that is relatively healthy,” wrote DNR fisheries biologist Mark Tonello in a summary of the most recent survey of the fishery in Lake Cadillac. “When combined with Lake Mitchell, the two lakes provide nearly 4,000 acres of fishable water. The fishing activities on the two lakes are extremely important to the Cadillac area, likely generating over $1,000,000 annually for the local economy.”

Lake Cadillac is located in southeastern Wexford County just west of the town of Cadillac. It’s connected to Lake Mitchell through a quarter-mile long dredged canal, navigable by most small boats. The canal runs through Mitchell State Park, where camping is available and there is a public boat launch.

Lake Cadillac is a relatively oval lake with a maximum depth of 28 feet. The shoreline is mostly developed with homes and cottages, except for one small coniferous wetland area on the north end of the lake and several public and private parks.

The parks, including William Mitchell State Park, Kenwood Park, and the Keith McKellop Lakefront Walkway, which provide public access to Lake Cadillac. There also is a public dock and fishing pier on the east end of the lake near the downtown business district and another fishing pier in the state park.

Several streams flow into Lake Cadillac and the lake drains into the Clam River in the northeast corner. The lake was originally called Little Clam Lake and featured several lumber mills on its shore in the hey day of Michigan’s logging era. The name was changed to Lake Cadillac in 1903.

Fisheries management dates back to at least 1874 when lake whitefish were planted in Cadillac by the Department of Conservation, the predecessor to today’s DNR. Lake trout also were planted in the 1870s, but due to the shallow, warm nature of the lake, coldwater species like whitefish and lakers did not fare well.

Between 1929 and 1975 several species of fish were planted in Lake Cadillac including walleyes, smallmouth bass, bluegills, and emerald shiners. The walleye population was self-sustaining for a while, but productivity eventually fell off.

Since 2004 only walleyes have been stocked regularly in Cadillac. Since no walleye natural reproduction now takes place in the lake the fishery is completely dependent upon annual stocking efforts.

“The once self-sustaining walleye population has diminished to the point where stocking is now required to maintain the fishery,” Tonello wrote.

In the most recent survey of the fishery in Lake Cadillac biologists collected 2,297 individual fish including 15 different species.

Bullhead was the most abundant species. Biologists collected 607 bulls ranging in size between 7 and 15 inches. Black crappies also were abundant in the survey nets. They averaged 9.5 inches and ranged up to 12. There were also good numbers of rock bass averaging 7.9 and ranging up to 10.

Walleye numbers were fair, but the fish averaged 19 inches and the largest was 24. There also were good numbers of largemouth and smallmouth bass. Largemouths averaged 14 inches and ranged up to 20, and the smallies averaged 14.3 and ran to 19.

The best time and place to catch crappies is in the spring along the causeway at M-115 at the west end of the lake. Later in the year they catch them right off the city dock and in the weedbed in front of the high school football field at the east end of the lake.

For walleyes, anglers target the gravel off the canal that leads to Lake Mitchell. The drop-off around the deepest hole in the lake is popular with local walleye anglers too, who catch fish by trolling with crankbaits and crawler harnesses and casting jigs tipped with crawlers, leeches and minnows.