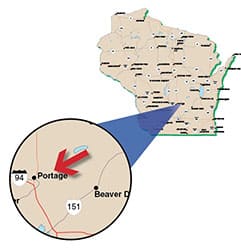 Swan Lake is a 407-acre drainage lake in central Columbia County that sits between Portage and Pardeeville. Swan is part of the Fox River, with the inflow entering on the east end, and the outlet on the west end. The lake is 2.4 miles long from inlet to outlet. Large sections of shoreline along the east and west ends of the lake are low, marshy wetlands that remain undeveloped. A DNR property, the 2,466-acre Swan Lake Wildlife Area, borders parts of the lake’s west end.

Swan is essentially a wide, deep trench; there is no dam to maintain the water level. The maximum depth of 82 feet may surprise first-time visitors, since Swan is characterized by shallow flats. The divide between the Fox River and Wisconsin River at Portage measures a mere 1.3 miles at its narrowest point. The short distance between the two rivers is where Portage derives its name.

The walleye estimate of 3.3 adults (15 inches or larger) per acre was higher than the 1.5 adults per acre from 2009. The adult walleye density was higher than average for a stocked walleye fishery in Wisconsin  where the statewide average is 1.7 adults per acre). Walleye natural reproduction was historically low in Swan Lake, but substantial natural year classes may have been produced in 2014 and 2015. Natural reproduction was low in 2016 and 2018.

Stocked small fingerlings survived well in Swan Lake with survival of stocked fish in 2017 and 2019 estimated at 11.0% and 18.2%, respectively. Walleye tag returns indicated anglers at Swan Lake were harvest-oriented. Most walleyes tagged in Swan either stayed put or moved upriver into Spring Lake. Only one walleye was documented moving downriver from Swan.

Northern pike abundance appeared to have increased since 2009, based on the catch rate. The population estimate for mature Pike was 709 fish or 1.7 fish per acre, with 27% of pike larger than 14 inches were also larger than 26 inches and, thus, legal to harvest. Swan’s pike averaged more than 26 inches by age 5.

Largemouth bass numbers and size ranked about the same as results from previous surveys. Largemouths grow quickly and average more than 14 inches by age 5. Size structure was good, with 35% of the fish larger than 8 inches also being larger than 14 inches. Largemouths up to 21.2 inches were collected. Smallmouth bass abundance was low, but appeared to be increasing based on 2017-19 fall electrofishing survey results.

Muskies were collected in low numbers despite a long history of stocking fall fingerlings in Swan Lake and a history of successful recruitment of those fish in the past. There has been little recruitment of stocked muskies since the late 2000s, with many years of zero recruitment. The largest muskie in 2018 measured 48.5 inches and weighed nearly 36 pounds. Two other muskies weighed 35 pounds or more.

From 2013-16 the stocked muskies were part of a study comparing survival of muskies started on pellet food and finished on minnows versus muskies reared entirely on minnows, which has been the traditional rearing method in state fish hatcheries.

The team also captured 158 channel catfish in the spring. Three nets on the east end of the lake produced 83% of the catfish catch. In total, 152 unique channel catfish ranged from 7.9 to 29.9 inches with average and median lengths of 22.3 and 22.4 inches, respectively.

Common carp and gizzard shad were collected in 2018, but their catch rates did not suggest they were present at nuisance levels.