You can look at DNR survey reports from Becker County’s Strawberry Lake dating back to the 1970s and see one constant theme: It’s always had a lot of walleyes in it. 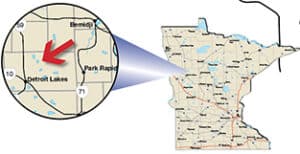 Smallmouth bass started leaving a footprint in Strawberry during the 1990s, which, combined with strong largemouth numbers, also makes it a solid bass fishery.

Its panfish run good-sized, with a nod to Strawberry’s crappies as far as angling interest, and although most northern pike are small, there have been a few more fish in the 30-inch class being caught of late.

“Strawberry is the epitome of consistency as far as walleye numbers and size,” said Mike Habrat, DNR Fisheries specialist in Detroit Lakes. “In just about every survey, the bulk of walleyes we see are always an inch or so on either side of 16 inches.”

Strawberry is surveyed every five years, and the 2017 report and preliminary numbers from this summer’s survey work showed more of the same. The lake continues to hold good numbers of quality walleyes.

Gill nets averaged 12 walleyes per lift in July, and their mean length was just less than 18 inches. There are shorter fish coming up and walleyes over 28 inches were sampled, with stocking and significant natural reproduction both maintaining the population.

The lake is also amazingly clear. Secchi disk readings this summer showed water clarity down to 21 feet, and its 1,500 acres are mostly void of structure – not great walleye-fishing traits.

“It has a featureless basin, and a lot of people overlook it for walleyes because of that,” Brewer said. “Those weeds are key, and they do run deep. It’s really weed walleyes all year long out there.”

While there isn’t much for traditional walleye structure, Strawberry does have some rock substrate, and it holds a lot of smallmouth bass.

The aforementioned weeds, both shallow and deep, provide consistent largemouth bass fishing. Smallmouth and largemouth numbers are pretty evenly split, and both bass populations include plenty of quality fish.

The DNR did not electrofish Strawberry this past summer, which is the most accurate means to calculate a bass population. But enough of them showed up in test nets to indicate that its bass population is in fine shape.

The lake’s panfish highlights include good numbers of keeping-size crappies and bluegills, with some bigger fish in the mix. Generally, anglers tend to gravitate more toward Strawberry for its crappies rather than bluegills.

It’s always been known as a fine crappie lake – one that currently has a bunch of fish between 10 and 12 inches long in it, although the right pod does produce crappies up to 14 inches in length.

Bluegills come more in the form of eating-size fish, with plenty of 8-inch bluegills for the table with the occasional bigger fish showing up. Historically, bluegill numbers have fluctuated a lot in this system.

“It is a good crappie lake, and they do get more interest than bluegills from anglers,” Habrat said. “I just don’t hear about a lot of people going there to fish bluegills.”

Northern pike abundance is high, and most of those fish run small, averaging just over 17 inches long in this summer’s survey.

Brewer added that he has caught a few pike over 30 inches the past couple of years, but that’s historically been pretty rare on Strawberry.