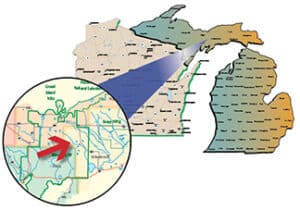 For Wisconsin anglers looking to cross the border into Michigan’s Upper Peninsula for some fishing, the Hiawatha National Forest just over the border is littered with glacial lakes that offer good fishing for a variety of species along with tranquil wilderness settings.

One of those lakes, Pete’s Lake, rests in the area where Delta, Schoolcraft, and Alger counties converge. It’s a very scenic lake and provides a diverse fishery, highlighted by a stocked walleye population.

Pete’s Lake is known as a good multi-species lake and features fishable populations of smallmouth bass, bluegills, rock bass, and northern pike, in addition to the walleyes.

There is a good amount of downed timber along the shoreline as well as a national forest campground – Pete’s Lake Campground – which provides a great opportunity for a camping/fishing trip for the whole family.

The campground features a fishing pier, a paved boat ramp, a swimming beach, picnic areas, and hiking trails. The campground is located on the north shore of the lake off Federal Forest Road 2173 – then watch for the signs.

Pete’s Lake is located in west-central Schoolcraft County along the Alger County line. It’s about eight miles northwest of the town of Steuben.

At just 197 acres, Pete’s Lake is not a large lake and it gets a good amount of recreational boating traffic. The best times for fishing are early and late on the weekends and during the middle of the week when most of the power boats are parked.

Pete’s Lake features an irregular shoreline and two distinct basins on the east and west ends of the lake. The east basin is relatively bowl-shaped and drops down to 37 feet in the center. The west basin features two holes – one drops down to 25 feet, the other to 34 – which are separated by a sandy bar.

The steepest drop-offs on Pete’s Lake are along the south shore in both basins, and the breaks along the north shore are more gradual. Weedbeds and downed trees are found along the shoreline and remnants of 52 fish cribs, sunk in the lake in 1972, remain along the northwest shore. The lake drains into Pete’s Creek, which eventually flows into the Indian River.

Records show the stocking of bluegills and walleyes by the Michigan Department of Conservation going as far back as 1937. The Michigan DNR has been stocking Pete’s since 1980 when it planted 275, 16-inch northern pike. Some 7,000 bluegills were planted in 1993, but the focus since 1990 has been on walleyes.

“The walleye population in Pete’s Lake is primarily maintained through stocking of spring fingerlings,” the DNR wrote in a summary of the most recent survey of the lake’s fishery. “Pete’s Lake is a popular recreation area for camping and fishing and walleye are a highly-valued species for the camper’s frying pan. Because of this, harvest of walleyes is assumed to be heavy, thus NLMMU (Northern Lake Michigan Management Unit) seeks to continue supporting the walleye program in Pete’s Lake by stocking spring fingerling walleyes at a rate of 25 per acre … on a biennial basis.”

In that survey, fisheries biologists found good numbers of northern pike up to 27 inches, with nearly 40% of them over the legal minimum size of 24 inches. The survey also captured good numbers of walleyes up to 20 inches, smallmouth bass up to 17, yellow perch to 9 inches, bluegills to 8, largemouth bass to 14, rock bass to 8, and perch to 9 inches.

To catch some of the lake’s walleyes, try working a jig tipped with a minnow, leech, or nightcrawler along the breaks in the three holes. Look for fish in the 20- to 25-foot depths. Some anglers drift crawler harness under a slip-bobber along the breaks, too. The best walleye fishing generally occurs at night when the powerboats and ski boats have been docked.

Smallmouth bass are found all over the lake and readily smack plastic tubes and worms as well as nightcrawlers and minnows. Work the shallows early in the year and move out to the weeds as warm weather moves in.

For largemouth bass, work the drops and weed edges with topwater baits, crankbaits, and soft plastics. When all else fails, throw them a nice, fat nightcrawler.

For bluegills, hit the shallow bays along the north shore in the spring. Black gnats, wax worms and leaf worms will all take fish. Try crickets and half crawlers along the weeds later in the summer.

Perch can be caught around the deeper holes and will inhale a juicy minnow.

Pike fishing can be hit-or-miss on Pete’s, but if anglers want to give it a go, try crashing the shallows early in the season with spinnerbaits, spoons, and large suckers or chubs fished under a bobber.