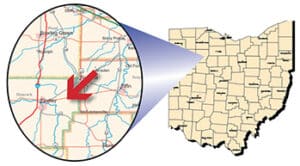 Findlay, Ohio – An angler could do much worse than the pair of reservoirs at Findlay in northwest Ohio.

The latest offering at Findlay are saugeyes, which have been stocked over the past several years to go along with the lakes’ stock of walleyes.

Built in 1950 and 1970 respectively, these two reservoirs served as the source of drinking water for Findlay. They share a mile-long dike at the north and west sides of Reservoir No. 1.

The water in both reservoirs is typically very clear and tinted a nice bluish green.

Findlay No. 1 is small at just 185 acres, but the fishing is pretty good here. Walleyes and yellow perch are stocked by the DNR Division of Wildlife, and saugeyes have been added to the stocking mix over the past few years, said Mike Wilkerson, fish management supervisor for the Division of Wildlife in Findlay.

“We did some research a while back and found that saugeyes tend to hang near the shoreline more than walleyes do,” Wilkerson said. “So, it makes (saugeyes) more available to shoreline anglers.”

There is a good population of channel catfish averaging 17.7 inches in length. Bigger fish up to 25 inches are available and the population is supported by natural reproduction.

A fair population of walleyes that average 18 inches in length are available. A large number, 60%, are greater than the minimum keeper length of 15 inches. Walleye fingerlings have been stocked here since 1990 at about 100 fish per acre.

“The fishing is pretty good for both walleyes and saugeyes,” Wilkerson said. “Sizes aren’t huge, but just average.”

Spring netting has shown a large population of yellow perch averaging 9 inches in length. In addition, 90% of these fish were greater than 8 inches in length. They are stocked in most years (as hatchery stock allows) at about 500 per acre.

A concrete boat ramp and courtesy dock are available.  The requirement is for electric motors only. Ice fishing is permitted.

At 643 acres, Reservoir No. 2 is the largest of its kind in the state, according to Wilkerson.

Walleye and yellow perch are stocked along with a good natural population of channel catfish, crappies, and largemouth and smallmouth bass.

A good population of channel catfish that averages 16.8 inches in length is available. Big fish, up to 25 inches, are also available. Look for the catfish in the deeper areas of the reservoir. Drop a dough ball, chicken liver, or a hot dog to the bottom for best results.

The best time to catch these fish is during spring and fall. Anglers should concentrate their efforts around the Christmas tree reefs that have been placed by the Division of Wildlife over the years.

All surveys show that both the largemouth and smallmouth populations numbers are low. Bass fishing is best along the shorelines in spring or summer. Try working the weeds with plastic worms or explore the pockets with crankbaits for the lake’s largemouth bass. Bass can be caught early in the mornings and during the evening off the rock banks. During the day, troll along the rock shoreline. For smallmouths, which fisheries biologist Bryan Kinter calls a “sleeper fishery,” try small crankbaits, crayfish-type lures, or even minnows on a spinner near the reservoir walls.

“There are actually quite a few smallmouths in there,” Kinter said. “ … What a lot of people do is just go around the shoreline out there casting toward shore.”

The Division of Wildlife has also started stocking some saugeyes in Findlay No. 2.

“The idea behind that is because (saugeyes) are more of a shoreline-oriented species to increase opportunities for shore anglers,” he said.

Surveys show a large population of white bass averaging 7 inches with fish up to 13 inches. These fish concentrate near the inlet structure when water is being pumped into the reservoir.

Fall netting surveys show a fair population of walleyes averaging 16.1 inches in length. Big fish, up to 25.5 inches, are available. To fish for them, try around the old road bed, about 300 feet north of the boat launch. This old road runs straight across to the edge of the conservation pool, and offer some structure for the light-sensitive walleyes to hide behind while waiting to ambush a meal. Try this with light colored jigs tipped with minnows or leeches. You also can troll the roadbed with shad-pattern crankbaits.

There is an excellent yellow perch population averaging 8 inches and some fish up to 10.5 inches available.

There is a concrete ramp and a courtesy dock available at the reservoir. There is also a fishing pier available. Boats are limited to a maximum outboard size of 9.9 hp.

Six walleyes per day are allowed with a 15-inch minimum size limit. The regulation for perch is 30 fish per day with no minimum size.