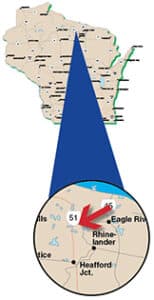 Anyone fishing the Arbor Vitae and Woodruff areas of Vilas and Oneida counties in the 1980s and early 1990s likely remember a colorful local character and fishing guide by the name of “Tadpole” Tommy Zinda. Zinda passed away in May 2010, but some of his stories still live on today. Those stories may be one reason why Carrol Lake remains a popular fishing lake.

Over his years of guiding in the Minocqua, Woodruff, Lake Tomahawk and Arbor Vitae area, Zinda worked in just about every bait shop around. Like any fishing guide worth his salt, Zinda wanted to be helpful to visiting fishermen, but without giving away too many secret spots. Carrol and Sweeney lakes were two of Zinda’s favorite “turr-ist” lakes. He often sent any visiting angler new to the area to Carrol or Sweeney. That’s not necessarily why Carrol and Sweeney are still popular today, since both lakes do sustain decent panfish and game fish populations. But, back then, those two lakes were blamed for more good catches than were warranted.

This week, let’s take a look and Carrol and it’s attached neighbor, Madeline. Carrol is easily the more popular of the two because it’s bigger, deeper, has more structure and fewer weeds. Madeline, while it has a decent fishery of its own, can become difficult to fish once the weeds come up in the summer. Still, a patient fisherman can do well on Madeline throughout the entire open-water season. Don’t want to mess with weeds? Then put Madeline on the ice fishing list.

Carrol and Madeline provide a link between Big and Little Arbor Vitae lakes to the north with Lake Minocqua to the south. Madeline isn’t hard to find – it sits just north of the DNR’s Woodruff office on Hwy. J east of town. The Arbor Viates drain into Carrol, Carrol into Madeline. Madeline’s drainage runs through the Art Oehmcke State Fish Hatchery and into Lake Minocqua. That water used to rinse through the hatchery and adjoining rearing ponds until a renovation about 10 or 11 years ago. Wells now provide hatchery water.

The survey targeted largemouths, smallmouths, black crappies, bluegills and pumpkinseeds. Although the team keyed in on bass, any game fish rolled up by the electrical current were collected during the 4.6-mile shoreline circuit, with one mile of shoreline sub-sampled for panfish. Carrol’s 352 acres actually include 5.2 miles of shoreline.

The crew captured 126 largemouths during the one evening (May 18, 2021) of surveying Carrol Lake. Their lengths ranged from 3.4 to 16.6 inches with an average length of 13.7 inches. In writing up his survey report, Chad Leanna, a local DNR fisheries technician, rated the size structure as fair, with 55% of the adult largemouth bass – those longer than 8 inches – stretching to 14 inches or more.

The team netted 231 bluegills, with lengths running from 3 to 8.3 inches. Of the bluegills measured, only 8.2% were 7 inches or longer. If going by half-inch groupings, 5-inch bluegills were the most abundant size group, with 6-inchers next, and 5.5-inchers in third place. While 6.5-inchers were the fourth largest group, fewer than 15 bluegills hit 7 inches and only five hit the 8-inch mark.

A total of 104 black crappies were captured during the survey, with lengths ranging from 4.8 to 12.1 inches. Leanna rated the crappie size structure as poor, with just 3.8% of that cohort measuring 10 inches more. That bulk of the crappies measured 5.5 to 6 inches.

Even though walleyes were not targeted during the survey, the team collected any walleyes within reach of their long-handled dip nets.

A total of 46 walleye were surveyed that night. Their lengths ranged from 6 to 30.8 inches, but most of the walleyes were small, juvenile fish that went 6 to 7 inches. The next most abundant size was 11 inches. Just seven of the 46 walleyes were 19 inches or longer. However, had the team surveyed the lake at ice-out with fyke nets, the walleye picture would have looked a lot healthier. Most walleyes at that time of the year would have left the shallows.

Still, the brief survey gives a glimpse of what Carrol and Madeline have to offer. A person can spend a day or two on this pair of lakes and catch a smorgasbord of panfish and game fish on aesthetically pleasing lakes.