Caesar Creek Lake in southwest Ohio offers a plethora of fish species for anglers and is a real gem of a lake in Warren and Clinton counties. 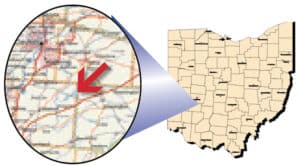 It encompasses about 2,830 acres at the normal summer pool level. Construction of the dam began in October 1971 and the gates were closed to start filling in January 1978. Caesar Creek is the deepest inland lake in Ohio with a depth of 115 feet near the dam. While under control of the Louisville District of the U.S. Army Corps of Engineers, the Ohio Division of Wildlife provides resource management of the fishery and wildlife area.

Adding to the recreational use of the lake is the marina, which was opened in the spring of 2016. The marina, which is a unique design for Ohio, is built to float with the fluctuating water level due to the flood control requirement.

Five boat ramps offer access to the lake. The Wellman Prairie Ramp, located off Oregonia Road south of State Route 73, provides convenient access to favorite fishing spots in the southern end of the lake. The state parks and watercraft ramp at the campground is great when fishing the northern part of the lake. Many maps show the Haines Road boat ramp on the northeast side of the lake just south of New Burlington Road. Haines Road has been renamed to Young Road so some map and GPS confusion may result. It provides access to some fine early spring crappie and muskie habitat. The North Pool boat launch is often very busy. The  waves and boat traffic can make loading the boat a little tricky here.

The lake offers a variety of fish structure from the creek tributaries to steep shores and into the deeper water at the southern end of the lake. There are plenty of gravel and sandy areas that form small bays around the lake. The coves still have a large number of standing timber and brush. Fishermen should use caution as many trees have now rotted off just below the water’s surface. Caution should also be used in the spring following heavy rains as there will often be trees and larger debris in the lake. A quality lake map plus electronic equipment will provide a significant aid in both navigation and locating fish.

For boating anglers, motors with unlimited horsepower are permitted.

A fishing pier equipped for those with disabilities is located near the marina. Some fish attractors, including a cool new fish attracting light, are included at this location.

“I would say bass and saugeye are the species that most anglers are targeting,” said Kipp Brown, a fisheries biologist for the Division of Wildlife in Xenia. “But, it’s also very well known for its muskie population and crappies … It’s got a lot going for it.”

Crappie fishing is especially good in the spring during the spawn. The crappies will be in the abundant submerged tree tops and brush lines that dot the lake. A favorite destination of many crappie fishermen is the big cove, known locally as Jonas Run, on the east side of the lake just north of the Pioneer Village. One of the lake’s islands is in this area. Fishermen should pay particular attention to the buoys and their depth-finder as Jonas Run area has some especially shallow areas. Late summer trolling the various points and shelves on the edge of deeper water often produces larger crappies.

A Division of Wildlife crappie survey in 2021 showed an average of 8.5 inches up to 11 inches.

The white bass run into the Anderson Fork and Caesar Creek tributaries each spring is an especially popular time. Later in the summer, white bass can often be spotted chasing shad in the open water. Division of Wildlife surveys indicate a good population of 8- to 11-inch white bass with a fair number ranging up to about 14 inches.

“The runs up into the creeks at this time of year are incredibly popular,” said Brown of the white bass.

Largemouth bass are also found throughout the lake. The Division of Wildlife conducted electrofishing surveys for largemouth bass in 2019. The lake supports largemouth, smallmouth, and spotted bass with largemouth being the predominant species, said Brown. The outlook for the bass fisherman continues to be good but real lunkers may be scarce. The average fish from that 2019 sampling was 12 inches and 3 years old, said Brown.

Flathead catfish inhabit the lake in good numbers, according to Brown.

“It’s got a lot of rock and structure in the water that flatheads like,” he said. “There’s a very strong population of them in there and we’ve seen some really big ones.”

A significant success story for Caesar Creek Lake is the continued growth of the saugeye and muskie fisheries. Both species have been intensely managed and stocked by the Division of Wildlife. There were over 6.6 million saugeye fingerlings stocked between 2000 and 2013.

Muskie fishing is the hot topic. The stocking program began in 1998 but it was about 10 years before muskies were noticed by fishermen. Between 2,800 and 5,600 advanced fingerling muskies have been stocked each year over the past five years. In 2021, 256 muskies were caught at Caesar with an average of 38 inches and a big fish taping at over 48.

The Division of Wildlife also started stocking blue catfish at Caesar in 2018. The state pours in about 50,000 advanced fingerlings per year, according to Brown. The older fish in the population are in the 20- to 25-inch range now and growing. Expect to hear more about the lake’s blue catfish possibilities in future years.