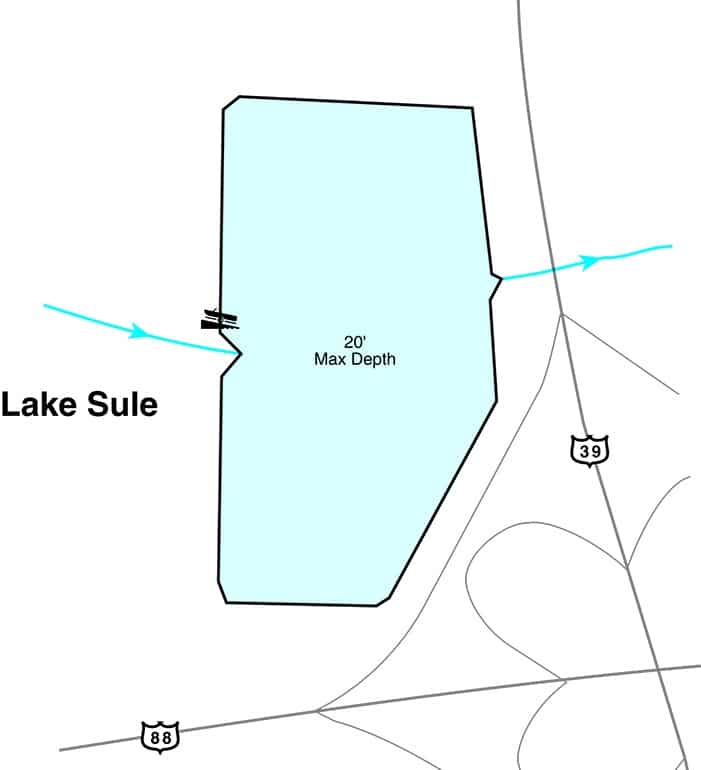 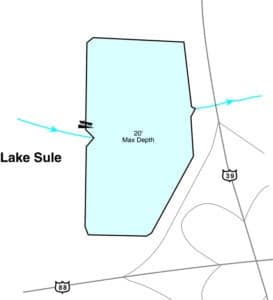 Anglers who frequent Lake Sule were alarmed when word spread that dead fish were found along the lake’s shore in recent weeks.

But local officials have eased fears, noting that the dead fish were victims of recent environmental conditions.

“This occurred about the same time last year and is nothing to be alarmed about,” said Flagg-Rochelle Community Park District executive director Jackee Ohlinger. “It is due to low oxygen levels in the lake from low water levels and plankton bloom that doesn’t allow the sunlight to penetrate into the water.”

Similar events take place at farm ponds and smaller lakes all across the state each year.

The 77-acre Lake Sule was created using a gravel pit that resulted from the construction of the I-39 and I-88 overpass.

That incarnation of the lake naturally has led to a lack of structure – a fact muskie anglers bemoan.

Still, a good forage base has led to some fat muskies and a growing number of healthy walleyes, early results of DNR’s most recent sampling suggest.

As a tributary to the Rock River, the fishery is made up of many river fish found in the Rock River drainage: carp, suckers, redhorse, buffalo, and gizzard shad, to name a few.

But there are walleyes and muskies, too.

DNR fisheries staff had good things to say about the lake.

According to DNR’s description, Lake Sule is stream-fed, which allows many rough fish, such as common carp, to get into the lake.

The lake is owned by the city of Rochelle and is managed cooperatively by the local park district and DNR.

DNR’s most recent survey of the lake revealed some new information on muskies, largemouth bass and bluegills.

Here are some notes from the DNR survey:

• The muskie population at Lake Sule has been historically good but no muskies where collected in the 2021 trap net survey. Muskies were also observed in an August 2020 fish kill, which could have reduced the population.

Muskies have been stocked at Lake Sule on a regular basis since 1992 to provide additional predator pressure on the large number of forage fish present in the lake.

Despite survey results, a good population of larger-sized muskies is thought to exist in the lake.

DNR biologists took note of an abundance of smaller bass.

“This may be due to the largemouth bass stocking program that was started a couple years ago. Also, larger-sized bass could have been missed due to the water level being very low during sampling,” DNR reported in its Lake Sule survey.

“Despite bluegill densities being high, and good bluegill body condition, very few larger bluegills were collected,” DNR noted. “It’s possible that larger fish are present but were difficult to collect due to water clarity and water levels being low at the time of the survey.”

Some local anglers have reported white bass being caught in the lake.

Located just to the east of Rochelle, Lake Sule is uniform in shape with a maximum depth of 20 feet and an average depth of 12 feet. A stream flows into and out of the lake and becomes Kyte Creek, which is a tributary to the Rock River.