Editor’s note: The Menomoinee River is a boundary water between part of Michigan’s Upper Peninsula and Wisconsin. Anglers often purchase licenses for both states, which enables them to fish the entire river. The Chalk Hills Impoundment (Flowage) offers quality fishing in both Michigan and Wisconsin waters and is co-managed by both state’s DNR. 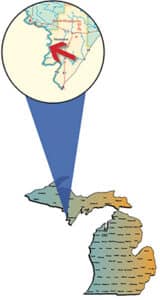 When anglers think about fishing the Menominee River, thoughts often turn to the lower stretch of river at Menominee where anglers catch walleyes, smallmouths, muskies, brown trout, and even whitefish during the fall spawning run.

There’s good reason for that lower stretch of the Menominee River to wear that kind of reputation, but there also is plenty of fishing to be done above Menominee. The Chalk Hills Impoundment west of Banat is one such spot.

The Chalk Hills Impoundment dam was built in 1927 to generate power for the surrounding communities and industry. The current federal license to operate the dam was issued in 1997 and expires in 2037. Michigan and Wisconsin own extensive, undeveloped shoreline near Pemene Falls. The impoundment has two public access sites and two wilderness campgrounds north of the dam on the Michigan side.

The Michigan DNR and Wisconsin DNR have stocked three fish species in the flowage and upstream waters on the Menominee River over the years. Wisconsin stocked more than 74,000 lake sturgeon upstream of the Chalk Hills dam from 1982 to 2017. The  Michigan DNR had an extensive muskellunge stocking program in Chalk Hills. More than 16,000 fingerling hybrid muskellunge were stocked from 1979-82. In addition, a northern strain of muskies was stocked from 1985 to 1997.  The Wisconsin DNR resumed muskie stocking in 2016 and annually stocked 477 to 843 fall fingerlings through 2019. The Wisconsin DNR also stocked 18,603 small fingerling walleyes in 2015. In 2016 and 2018, fall fingerling (6 to 8 inches) walleyes were stocked at 8,000 per year.

The Wisconsin DNR ran a fish survey on Chalk Hills in June and September of 2019. Surveys prior to that were conducted in 2012 and 2006. The dominant game fish species were walleyes, smallmouth bass, muskies, and northern pike. The walleye population appears to be improving since stocking was initiated in 2014. In 2019, young-of-the-year (YOY) fall capture rate was 7.8 juvenile walleyes per mile.

The smallmouth bass catch was very good and similar to other Menominee River flowages, according to a report written by Michael Donofrio, DNR fisheries supervisor. He also noted the fingerling muskies stocked that fall were captured up to a few miles from their stocking location and in good numbers after a September 2019 stocking.

Black crappies, yellow perch, and rock bass were the most common panfish species. Panfish population estimates weren’t calculated during the 2019 survey, but Donofrio  said good recruitment was evident from juvenile fish captures of most species.

“The diversity and stability of the fishery remains consistent with similar surveys performed in 2006 and 2012,” he wrote.

The DNR crew didn’t catch walleyes in big numbers. The crew netted 30 walleyes in June and 48 in the fall survey. Juvenile walleyes less than 15 inches dominated the catch. Only 6% of the captured walleyes were longer than the 15-inch size limit. The YOY fall capture rate was 7.8 juvenile walleyes per mile, a bit lighter than what fish biologists might want to see there. It should also be noted that while electro-fishing surveys work well in shallow water, rolling bigger fish out of deep water is more difficult.

Most of the fall fingerling muskies were “scatter planted” in early September around the upper end of the flowage, mostly around Miscauno Island, before the survey. Based on similar size of the 27 muskies caught during the later September survey, most of those fish came from the 2019 stocking. Only one bigger muskie was netted. It was 25.7 inches and aged out at 3 years.

Smallmouth bass were only sampled during the June survey when the crew netted 61 smallies from 3.4 to 18.5 inches. They averaged 14.4 inches.

“Chalk Hills supports a good fishery, with evidence of natural reproduction for several fish species. The walleye and smallmouth bass populations appear strong,” Donofrio said. “There also appears to be good evidence of survival of stocked walleyes from 2014, 2016, and 2018. Recently stocked muskellunge were also caught during the September 2019 survey. Limited numbers of pike were observed, but natural recruitment was evident through the capture of juvenile pike.”

The Wisconsin DNR planned to stock walleyes and muskies in the fall of 2020.

The most common panfish species were rock bass and yellow perch. Anglers who were interviewed said Chalk Hills has a fishable perch population.