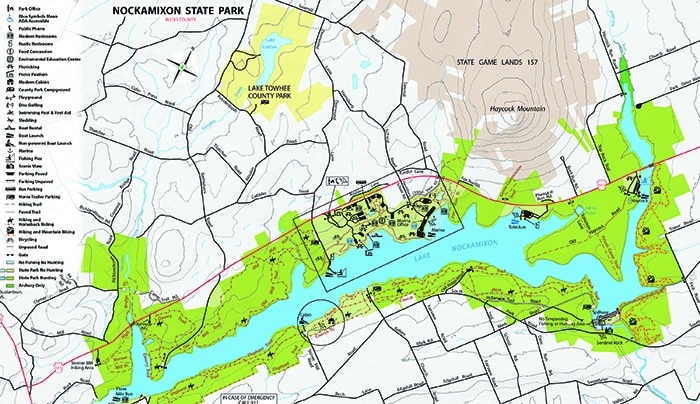 Nockamixon Lake is big, covering 1,450 acres. It has an abundant forage base, made up largely of alewives and gizzard shad. And it’s got plenty of fish-holding habitat, both near shore and off shore.

And? Check and check.

Pennsylvania Fish &Boat Commission biologists had surveyed the lake – centerpiece of Nockamixon State Park in Bucks County – numerous times prior to spring of 2021. Always, though, those efforts focused primarily on the lake’s muskies and walleyes.

Last year they decided to look at its bass. They electroshocked a dozen 300 to 400 yard stretches of the lake’s shoreline over two nights, covering all of the habitat types found at Nockamixon.

They caught bass. Boy, did they catch bass.

Nockamixon is managed under “Big Bass” regulations, which limit anglers to keeping four bass of at least 15 inches per day, rather than the six of 12 inches allowed in waters under statewide regulations. The program is meant to stockpile bass between 12 and 15 inches.

Almost all of the fish biologists got were largemouths – they got just two smallmouths – with the fish ranging in size from 6 to 21.75 inches. The vast majority of fish, though, went 14 to 20 inches. A full 65 percent exceeded 15 inches, and 20-inch bass were almost as common as 15 inchers, and more common than 12 inchers.

And those are just the bass biologists managed to capture. They suspect even larger ones swim in the lake.

“Although the catch rate of large fish was impressive, we know that there are largemouth bass in this reservoir larger than those captured during this survey, based on angler reports,” the biologists wrote in a summary of their work.

“Electrofishing surveys rarely capture the largest bass in a population, and post-spawn movements into deeper water likely explains the observed largemouth bass size structure and the lack of smallmouth bass in this sample.”

Anglers get those bass from shore in summer, with a fishing pier in the main day-use area and a accessible fishing platform near the Haycock Boat Launch as well as from boats. This is a popular lake with anglers in unpowered craft, too, and boats up to 20 horsepower are permitted.

But don’t overlook this lake in winter. Ice fishermen do well here when conditions permit.

All of those anglers can catch more than just bass, too.

The Fish & Boat Commission used to stock Nockamixon with both tiger muskies and purebred muskies. What the agency found is that while specimens of each variety survived, the tiger muskies were very, very slow to grow. Much slower than the purebreds, in fact.

As a result, tiger muskies stockings were halted. The lake still gets purebreds, though, and they are doing pretty well.

Biologists tagged some of the muskies stocked so that, if recaptured in subsequent efforts, they could be identified and measured. What that’s revealed is that muskies in Nockamixon Lake are growing fast – sometimes twice as fast – as muskies across Pennsylvania in general.

Some females, which tend to grow faster than males, were approaching the 40-inch minimum size to be legal in as little as four years. Elsewhere the average to get to that size is eight years.

So, biologists say, Nockamixon Lake’s muskie fishery ranks as a good one, and offers anglers in the hard water season the chance at a real trophy.

There are plenty of other gamefish worth noting in this lake, too. Nockamixon Lake holds black and white crappies, bluegills, chain pickerel, channel, bullhead and white catfish, striped bass and striped bass hybrids, walleyes, and white and yellow perch.

The lake’s bluegills tend to be small. But its crappies can be especially impressive. Survey work and angler catch reports indicate fish up to 18 inches are occasionally seen, with lots of individuals longer than 9 inches common.

Channel catfish thrive here, as well. Anglers routinely get big ones, with fish longer than 30 inches not unheard of. Biologists said almost two-thirds of they saw went longer than 20 inches, too.

The stripers, striped bass hybrids and walleyes all reach similar sizes, into the upper 20-inch range. Anglers get all of them through the ice as well in open water seasons.

Nockamixon’s pickerel aren’t as numerous – though they’re not rare either. But they, too, can stretch into the mid-20-inch range, and are always a bit of a treat.

Add it all up and that’s a lot of fish, of a lot of kinds, swimming in a large lake and offering lots of opportunities. That’s a winning combination no matter how you look at it.