The king of this Hill? Black crappies are Aitkin County royalty 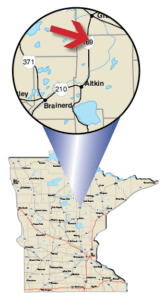 Collectively, the two basins that form Hill Lake make it one of the larger lakes in Aitkin County. With a total of 907 acres, divided by Highway 200, Hill is a well-known fishery in these parts, especially for its crappie and walleye production.

The lake is no slouch when it comes to largemouth bass, either. Those fish seem to have grown in numbers and popularity among local anglers during the past decade. Mix in some respectable northern pike along with a robust bluegill population and Hill’s fish-catching opportunities are plentiful.

But its black crappies have always been this lake’s bread and butter. Based on a DNR lake survey conducted in 2020, excellent crappie fishing remains.

The number of crappies in trap and gill nets during that survey both increased from the previous survey, five years earlier. In fact, gill nets averaged 10 crappies per lift – an all-time high for the lake, and anytime that many crappies show up in summer test nets, you know overall numbers are strong.

“Crappies are looking pretty good, and there are some really nice ones in there,” said Rick Bruesewitz, DNR Fisheries supervisor in Aitkin. “The number of fish we saw in nets suggests a really good crappie population right now.”

Fish up to 13 inches were sampled in 2020, along with a whole bunch of crappies from 9 to 11 inches in length. That seems to be the norm for Hill, according to Bill Powell, owner of Fred’s Live Bait in Deer River.

“People go down there for crappies, especially during the winter, and they catch a lot of those 10- to 11-inch fish,” Powell said. “I’ve been here for 20 years, and it seems like people have always done well for crappies on Hill.”

Bluegill numbers also saw a spike in the 2020 survey, but few fish over 8 inches were sampled. Summer nets aren’t the best means to determine a lake’s bluegill population, and Bruesewitz is confident there are more ‘gills around 8 inches than the 2020 survey revealed.

Hill’s walleye population has historically been strong, maintained through both natural reproduction and DNR stocking. During the past six years or so, walleye numbers have noticeably declined, especially shorter fish, which were almost nonexistent in targeted walleye surveys from 2012 through 2018. That’s meant some pretty lean walleye-catching opportunities for anglers in recent years. Fortunately, walleyes in gill nets during the 2020 survey increased to three per lift. The number of smaller walleyes increased, too.

“From 2015 through 2018, we noticed no new (walleye) recruits coming up, and Hill Lake was always easy to manage through stocking,” Bruesewitz said. “We heard from people wondering where the walleyes went and what we could do to get them back.”

Natural reproduction is currently minimal, but the lake is now stocked annually, rotating between fry and fingerlings. While walleye numbers have not reached historical highs, in the 2020 survey, they did meet normal levels for this type of lake.

Largemouth bass fishing has grabbed the attention of many local anglers in recent years, and Hill does hold plenty of fish from 15 to 18 inches in length.

The northern pike population is not overly abundant, but it does consist of quite a few fish over 26 inches long. Bruesewitz added that the average size of Hill’s pike is one of the best in the area.