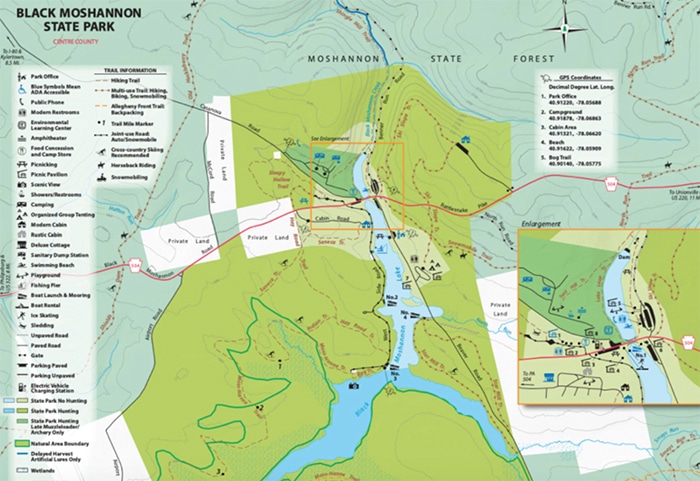 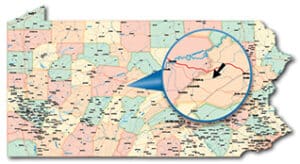 Never has a lake been so aptly named.

Rather, Black Moshannon draws life from a bog, the kind of habitat marked by spongy, green sphagnum moss. It’s an ancient bog, too, though no one knows just how old.

Sphagnum moss doesn’t break down like leaves over time, instead turning into peat moss and piling up in layers. Research done at Black Moshannon has uncovered layers of peat moss 4 feet deep. That takes time. Lots of it.

All that creates some unique surroundings for anglers and hunters who visit the lake and the surrounding state park.

But the fishing can be good, with some occasional trophies for the taking.

There are some big northern pike in Black Moshannon, for starters. The Pennsylvania Fish & Boat Commission stocked northerns in the lake annually for the first 11 years of this century to boost that fishery.

That created opportunities, for sure. Commission surveys of the lake have found northerns up to 35 inches or so. Anglers have over the years pulled pike out of here big enough to qualify for one of the commission’s Angler Awards, too. For pike, that means fish going at least 27 inches or 11 pounds.

Chain pickerel are also common in Black Moshannon. They don’t top out at the same sizes as northerns, but this lake produces a fair number of specimens between 15 and 20 inches, with some bigger ones showing up from time to time.

Those two species can be caught from open water, as Black Moshannon offers pretty good shoreline access and allows boats – non-powered and electric motors only – that launch from one of four spots. But often, the biggest reported in any given year come through the ice.

Numbers-wise, yellow perch are probably the most common fish here, followed closely by bluegills. Pumpkinseeds and black crappies are far, far less abundant, though there are a few.

Most of those panfish are average in size. But again, a few bigger fish show up every year, especially when it comes to the crappies.

Brown bullheads are plentiful, and unlike some of the other species, they seem to run large as often as not.

Anglers looking for something really out of the ordinary can always try for one of the lake’s bowfins. Sometimes called a “living fossil” because it’s the last surviving member of a family of fish that dates back 150 million years, the bowfin is an aggressive feeder and a hard fighter – so they’re fun to catch.

Black Moshannon Lake doesn’t hold a lot of them. But those it does can reach lengths of 2 feet or more.

Fish habitat structures, mainly rock rubble humps and small porcupine cribs, were installed in the lake some time ago near the boat launch closest to the dam breast. So that can be a good area to fish. Anglers also can find fish around the lake’s many weeds.

Those who prefer their fishing to center on trout, meanwhile, have options here, too. The 1.3 miles of Black Moshannon Creek from the state park boundary to about a quarter mile downstream of the Huckleberry Road bridge is managed under delayed-harvest, artificial-lures-only rules. There are also some wild trout streams here.

Fishermen, on the ice or off, aren’t the only sportsmen who can enjoy this area, though. Black Moshannon State Park encompasses 3,394 acres total. More than 3,000 of those – so close to the entirety of the park – are open to hunting.

Black bears are one species worth pursuing. In the five years between 2016 and 2020, Centre County, overall, gave up no fewer than 87 bears in any one year, and in cases as many as 146.

Hunters take more than a few of those from the Black Moshannon area, either within the park itself or from the surrounding state game lands and state forest.

As every die-hard upland hunter knows, these are tough times for ruffed grouse in Pennsylvania. A combination of habitat lost to age and population-suppressing impacts of West Nile Virus carried by mosquitoes is to blame, it seems.

But there has been some habitat work in this area to benefit the birds. Hunters can check with the park, state forest and Game Commission to find the location of recent timber cuts and burns. Those areas are among the most likely to hold grouse.

The Black Moshannon area is worth checking out for turkey hunting, as well. And small game hunters can find plenty of squirrels, which if anything go underutilized for the most part.

So, for those to whom the setting means as much as the opportunities, there’s lots to do at Black Moshannon.

To reach Black Moshannon State Park from Philipsburg, follow Route 504 east for just under nine miles. Turn left onto Casanova Road and follow it into the park.

WHAT YOU SHOULD KNOW: The lake, which is shallow and at high altitude – meaning it freezes early – is relatively infertile, so its fish grow slowly. But the fishing can be good, with some occasional trophies for the taking.

Boats must be non-powered or electric motors only.

Black Moshannon State Park covers 3,394 acres total. More than 3,000 acres are open to hunting. There are plenty of black bears and deer.