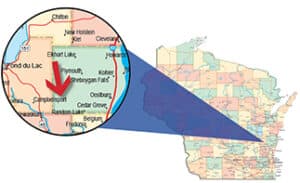 The Department of Natural Resources (DNR) has stocked various salmonid species into Green Bay since the 1960s with the initial intent of controlling introduced species like alewives and smelt while providing a near-shore and off-shore fishery for anglers.

Early creel surveys showed harvest and return rates for Green Bay brown trout were exceptional throughout the late 1980s and 1990s. Since 2000, brown trout fishing has experienced a sharp decline. Stocking numbers have varied somewhat since the 1980s but, remained fairly consistent until 2010 when fingerling stocking was greatly reduced. Between 2011 and 2015, only yearling brown trout were stocked. Fall fingerlings and yearlings have been stocked since 2016.

Historically, the DNR has stocked several strains and age classes of brown trout into Green Bay and its tributaries. To promote an extended trophy fishery, the seeforellen (German) brown trout program was initiated in Wisconsin waters of Lake Michigan in the early 1990s. This strain originated from alpine lakes in Germany. Seeforellen generally live longer and grow faster than other strains, thus adding to the trophy element of the fishery. Currently, seeforellen brown trout are the only strain that Wisconsin routinely stocks into Lake Michigan.

DNR fishery crews around Green Bay ran brown trout surveys in 2019 to estimate total harvest. That number came in at 2,466 fish and was improved from the 2018 estimate of 1,583 fish. Harvest rates for anglers targeting salmonids in Green Bay improved noticeably in 2019 (12 hours per fish), compared to 24 hours per fish in 2018.

Beginning in 2017 and continuing in 2020, all yearling brown trout that Wisconsin stocked into Lake Michigan received an adipose fin clip. In 2020 and 2021, this will allow DNR crews to evaluate contributions of Wisconsin brown trout to the Green Bay fishery, as compared to unclipped brown trout stocked by the Michigan DNR in northern Green Bay.

Seeforellen brood stock will continue to be collected in the Root, Sheboygan, and Kewaunee rivers. Fall assessments will continue to be conducted in the Menominee and Peshtigo rivers. The DNR plans to continue off-shore stocking the yearling brown trout in Green Bay. Since off-shore stocking began, harvest rate has generally improved compared to the previous eight years. Two exceptions are 2013 and 2014, which were late ice-out springs that prevented early season near-shore trolling for brown trout.  In 2020, the DNR continued to stock brown trout, conduct index surveys, and evaluate their contributions to the Green Bay fishery

Prior to 2015, the Peshtigo River was surveyed only periodically in the fall for salmonids. Beginning in 2015, the Peshtigo River has been surveyed on a similar schedule (weekly) as the Menominee River. Electrofishing surveys targeting trout and salmon were completed on the lower Peshtigo River from the city garage landing upstream to the abandoned railroad bridge. Water levels on all days sampled were high enough to allow the boat to navigate above the riffle near the island. Five brown trout were captured. Thirty pink salmon and 14 chinook salmon were captured, including nine with adipose fin clips, indicating stocked fish.

Electrofishing surveys targeting trout and salmon on the lower Menominee River were done weekly from Oct. 2 through Nov. 5, 2019. Trout and salmon were also collected as part of a whitefish survey on Nov. 25. A total of 75 brown trout were captured, averaging 26.5 inches.

Forty-five pink salmon were captured in 2019. Fifteen king salmon were also sampled. All chinook salmon had adipose fin clips, indicating stocked fish. Thirty-four rainbow trout were captured in 2019, up from 17 in 2018. Eleven rainbow trout had an adipose fin clip. Those fish were collected and heads were checked for “coded-wire tag” analysis. During the fall sampling period, water levels in the lower Menominee River were relatively higher due to above normal Lake Michigan water levels. In addition, river discharge was above average.