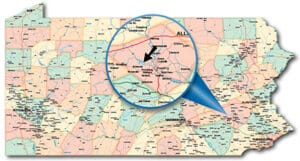 Big fish and small game, that’s what anglers and hunters can find in Blue Marsh Lake and on the surrounding countryside in the fall.

Such variety seems fitting. After all, the U.S. Army Corps of Engineers built Blue Marsh between 1974 and 1979 primarily to control flooding, improve water quality and serve as a water supply. But from the get-go it was meant to be much more than that.

Located northwest of Reading in Berks County, it was and remains a “multi-purpose” project. That means it also provides for all kinds of recreation, from hiking and mountain biking to fishing and hunting.

Some of that can be pretty special. When it comes to the fishing, for example, Blue Marsh Lake is all about big creatures.

For starters, it has a well-deserved reputation as a fine place to catch tiger muskies. And things may only get better.

The Pennsylvania Fish & Boat Commission has stocked muskies – initially purebreds and tigers, now exclusively the latter – there almost annually since 1979. The result is a good fishery. Surveys of the lake done in recent years revealed better than average tiger muskie catch rates.

Many of those fish get really big, too. Biologists report handling fish going 44 inches and 20 pounds.

That fishery could get even better thanks to a change in stocking. Early on, the commission used to stock Blue Marsh’s muskies in spring as fingerlings averaging about 6 inches long. But starting in 2016 it switched to stockings muskies in fall, when they were nearly 10 inches long.

Commission research suggests releasing fish at that larger size leads to better survival. In the long term, that should mean better fishing, too.

In the meantime, Blue Marsh Lake gives up plenty of big fish of another kind. That’s catfish.

This 1,150-acre lake produced the then-state record flathead catfish in 2006. It weighed just more than 48 pounds.

That mark has since been eclipsed, but Blue Marsh every year gives up flatheads approaching 50 inches in length. So it could someday take the record back.

Channel catfish are plentiful and large here, as well. The last survey of this lake, done in 2016, found channel cats to be the third-most-common species in the lake, behind only bluegills and black crappies.

Unlike those other two species, though, the channel cats tended to be large on average. Commission biologists handled some as long as 30 inches, and more than four in 10 stretched more than 20 inches the last time any looked.

Anglers looking for those fish might want to focus on the portion of the lake managed under slow no-wake rules. Trap nets and electrofishing turned up more fish in that area, generally speaking, than in those places where unlimited horsepower boats can roam.

Three boat launches serve as starting points in all cases. There is shore access for fishing, but the lake’s often steep banks dictate where anglers can go. One good spot for shore anglers to try is the Stilling Basin. Located at the lake’s outlet, it’s open 24 hours and has an accessible fishing platform.

Wherever you go, pay attention to shoreline cover. The Army Corps and Fish & Boat Commission have over the years felled shoreline trees around the lake. Those, together with ones that toppled into the water naturally as a result of storms or something else, are fish magnets.

Biologists examined the water around those trees and compared the fish caught there to what they got at more barren shorelines. All of the spots with trees produced more fish. That was especially true with regard to species like crappies and carp, but also bass, walleyes and sunfish.

To reach Blue Marsh Lake from Reading, take Route 422 west. Exit onto Route 222 north, then look for Paper Mill Road. That becomes Palisades Drive. Follow that to the Dry Brooks day-use area and other access points.

WHAT YOU SHOULD KNOW: The U.S. Army Corps of Engineers built the lake beginning in 1974 to control flooding and serve as a water supply.

The Army Corps property is managed by the Game Commission as State Game Land 280.

There are plenty of white-tailed deer on the property as well as small game and also pheasants.

TO GET THERE: From Reading, take Route 422 west. Exit onto Route 222 north, look for Paper Mill Road. It becomes Palisades Drive. Follow that to Dry Brooks day-use area and other access points.