Random Lake has plenty of walleyes and muskies 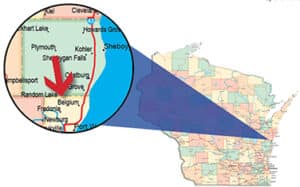 The local DNR fisheries team ran a comprehensive survey on Random Lake in 2018 to gauge the fishery’s status and run game fish population estimates. Extensive aquatic vegetation and heavy fishing pressure provide some challenges for managing the lake, but overall the fishery appears to be in decent shape.

The crew handled 281 walleyes, with the catch rate above average when compared to similar lakes across the state. The population estimate came in at 2.0 adult walleyes per acre; not bad for a stocked lake. The average length was 20.4 inches, with the biggest fish hitting 26.5 inches. Walleye growth rates were above the statewide average. Based on findings from the survey, 77% of the walleye population is larger than the size limit of 18 inches. Small fingerling walleyes have been stocked every other year in Random Lake since 1998.

Random Lake is known as one of southeastern Wisconsin’s best muskie lakes for a reason, but there is some concern for the below average body weights or condition of older fish. Random’s stocked fish grow at a rate above the state average to about 6 years old, but then slow down. The 2018 density came in at 1.2 adult fish acre. That’s quite a bit higher than the .2 to .25 fish per acre that’s considered a “good” population level on other muskie lakes. All of those fish would like to eat something and many of those “somethings” are likely hiding in the extensive weed beds where they’re not easily captured by muskies, walleyes, and largemouth bass.

“The slower growth rates for fish older than age six coupled with poor body condition may indicate a possible overabundance of muskellunge in the lake,” wrote Addie Dutton in a 2019 report on the 2018 survey. Dutton was the Sheboygan County DNR fish biologist at the time. Dutton has since moved to her home state of Michigan to continue working as a fisheries biologist.

Being one of two lakes in Sheboygan County that has a muskie population, the Between the Lakes Chapter of Muskies, Inc., is very active in working with the DNR on muskie management. Large fingerling muskies have been stocked frequently since 1990.

Bluegill, crappie and perch growth rates were below the state average. All three species were also overabundant – too many stunted panfish. Dutton credited the lake’s heavy aquatic vegetation growth as the most likely culprit for this scenario.

In 2019 Dutton offered several suggestions for Random Lake, starting with some sort of treatment of vegetation, at least for Eurasian watermilfoil and curly-leaf pondweed because the dense weeds are likely contributing to stunted bluegill growth and below average bass size by creating a refuge for bluegills.

Other suggestions from Dutton included:

• Continued stocking of small fingerling walleyes every other year while continuing to evaluate natural reproduction and recruitment to determine future stocking needs;

• Continue stocking large fingerling muskies but reduce the rate and frequency to every other year at 0.5 fish per acre;

• Consider changing the largemouth regulation from the statewide 14-inch minimum, five-fish daily bag to a higher size limit because of the drop in bass numbers above the size limit and to give adult bass more years of spawning before they can be harvested;

The lake sits in southern Sheboygan County near the Ozaukee County line in the village of Random Lake. It is considered a headwater lake because the watershed is less than four square miles. It has 4.3 miles of shoreline, and mean depth of six feet. Water clarity is low and is impacted by suspension of sediments.

Most of the shoreline is developed. The northeast corner and a small section on the east shore are the only undeveloped areas, primarily marshland dominated by cattails. The lakes sees heavy boating and fishing use.