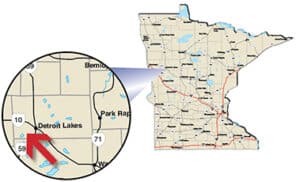 Finding a lake in Minnesota that still has the ability to produce good-sized northern pike is not an easy task. While there’s no shortage of fisheries loaded with hammerhandles, those that offer the opportunity to catch fish in the 30-inch or larger class – regularly – are quite rare.

Becker County’s Lake Melissa is one of the exceptions. It’s a 1,850-acre bowl-shaped system with an abundance of structure, vegetation, a tullibee forage base, and enough deep water to allow many of its pike to grow beyond “snake” status.

There also are plenty of walleyes to be caught in Melissa, and its year-round crappie production garners angling interest as well. But if you want to catch a few bigger northern pike in this part of the state, Melissa is a pretty safe bet.

“We have quite a few guys who go there and specifically target pike. I know of two 40-inchers (northerns) that were caught on Melissa last winter,” said Mike Witt, of Quality Bait and Tackle in Detroit Lakes. “The slot limits have been working. I mean, you’re still going to catch numbers of small fish, but there are a lot of big pike in the lake.”

The current slot to which Witt refers has been in place since 2011. It protects pike from 24 to 36 inches in length. It’s one of several pike regulations that have been implemented on Melissa dating back to 1986, but the current rule seems to be working.

According to Nathan Olson, DNR Fisheries supervisor in Detroit Lakes, the most recent survey conducted on Melissa took place in 2019, when gill nets averaged about 12 pike per lift. That’s a bit higher than he’d like to see, although the slot seems to be maintaining a decent size structure.

“We’d like to be below that, but we’re definitely seeing more fish in the mid- to upper-20-inch range,” Olson said. “Melissa has never been considered a trophy pike fishery, but it’s always had nice pike in it.”

The lake’s walleye population is maintained primarily through annual stocking. The DNR strips walleyes every year spring at its egg-take facility on connected Lake Sallie, and a certain percentage of those hatched fish are stocked in Melissa.

Walleyes also have the ability to move freely among other lakes on this Pelican River system, including Lake Sallie. This all adds up to some pretty consistent walleye numbers in Melissa from year to year.

During the 2019 survey, gill nets averaged seven walleyes per lift, which is a healthy number and right where Olson likes to see it. The sampled walleyes averaged 16 inches in length – pretty common by Melissa’s standards.

“It tends to provide good numbers of eating-size walleyes, and we usually see consistent year-classes coming through,” Olson said. “I know people have had decent walleye fishing out there in recent years.”

Melissa’s panfish population is highlighted by its crappies more so than its bluegills. Bluegills are abundant, but require some sorting, averaging 7 to 8 inches in length. Not running as big as they do on many lakes in this area, Melissa’s bluegills just don’t get that much attention.

Crappies are numerous, average about 10 inches long with some bigger fish in the mix, and provide good year-round fishing. That means heavy pressure at times, but Melissa’s crappies seem to take it pretty well.

“The lake has good crappie habitat, so recruitment is pretty consistent,” Olson said. “Crappies usually don’t sample well with standard gear, but we had 10 to 20 in nets. That tells me it has a pretty good population.”

Largemouth bass numbers are impressive, too. Bass from 15 to 18 inches are caught regularly on Melissa.