Some anglers prefer the Bottles for walleyes, bass 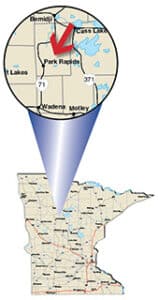 While their physical features are different, Lower and Upper Bottle lakes in Hubbard County are identical in the fish they produce.

Located just north of Dorset, Lower Bottle is the larger of the two lakes, features more structure, and deeper, maxing out at over 100 feet. Upper Bottle has its share of structure as well but isn’t nearly as deep.

The lakes are connected by a navigable channel, which allows fish to move between the two systems. So from a fishing standpoint, what you catch in one, you can expect to catch in the other.

“They have different habitat, but the fish species are very similar,” said Calub Shavlik, DNR assistant fisheries supervisor in Park Rapids. “Both are good walleye and bass lakes that really mirror each other.”

Walleye fingerlings are stocked in Lower and Upper Bottle lakes during even-numbered years. Both lakes consistently pull off naturally reproduced year-classes of walleyes, too.

In fact, those natural year-classes tend to carry the walleye population in both lakes. Based on results from a 2018 DNR survey, that population includes a wide range of sizes, from eating-size walleyes to some trophy-size fish.

“They really do have a good mix of (walleye) sizes, and there are big walleyes in both,” said Will Wicks, of Delaney’s Sporting Goods in Park Rapids. “They’ve always been good walleye fisheries, and they tend to be less pressured than a lot of our other lakes.”

In the 2018 survey, the majority of walleyes sampled in Lower Bottle were between 14 and 17 inches long. In Upper Bottle, there were a lot of fish from 10 to 19 inches and, not surprisingly, length distribution was similar to Lower Bottle.

Largemouth and smallmouth bass provide excellent angling options on both lakes. You can expect to catch more largemouths than smallmouths, but the smallies you do bring to the boat are typically high-quality fish.

Both lakes have plenty of submerged vegetation for anglers to work for largemouths, as well as rock and sand that hold smallmouth bass. Generally, anglers tend to find a few more smallmouths in Lower Bottle than they do in Upper.

“The bass run good-sized. There’s an opportunity to catch 17- to 18-inch bass on both lakes,” Shavlik said. “I think they’re sort of sleeper lakes in the area for largemouth and smallmouth bass.”

During the 2018 survey, the pike sampled from both lakes averaged 22 inches in length and weighed about 2 pounds. The largest pike from Lower Bottle measured 39 inches, and Upper Bottle gave up one pike that was 37 inches long.

Neither Lower nor Upper Bottle are considered high-priority panfish lakes – at least compared with many other fisheries in this area.

Bluegills tend to run around 7 inches long on the upper end with a few over 8 inches in the mix. Crappies are less numerous, but both lakes do hold fish over 11 inches in length.

“You don’t hear a whole lot about the panfish, but I know people do catch nice sunfish and crappies out there,” Wicks said. “They seem to catch nicer panfish during the ice-fishing season.”

It isn’t out of the question that an angler might hook a muskie from either lake as well. Shavlik said a few have snuck in from Big Mantrap Lake over the years, which is connected to Upper Bottle via a small flowage.

The lakes are not muskie fisheries, but a few incidental fish have been caught from both lakes.