The long-time ban on keeping walleyes from Iron County’s Winslow Lake has been lifted, and anglers can take a meal home with them. 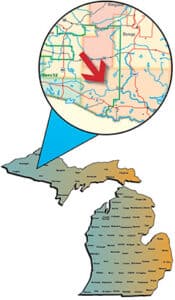 “The no-take walleye regulation was removed…. By partnering with our own Tribal Coordination Unit and the Great Lakes Indian Fish and Wildlife Commission, we are continuing to monitor the walleye population with fall walleye recruitment surveys and a spring walleye population estimate survey,” said DNR Fisheries Biologist Jennifer Johnson. “With the natural variability in walleye recruitment, it is still too early to fully assess how the population is trending post regulation change.“

For nearly 25 years walleyes were protected in Winslow Lake and anglers there have been practicing catch-and-release fishing. With pressure from the angling community, Johnson pushed through a proposal to get the “no-take” order rescinded.

“Beginning in 1992, fishing regulations at Winslow Lake and two additional lakes (Stager Lake, Iron County and Six Mile Lake, Dickinson County) were changed to no-possession walleye lakes,” Johnson wrote in a report following the most recent survey of the status of the fishery in the 258-acre lake. “The zero bag walleye regulations were recommended by Law Enforcement Division personnel after excessive angler extraction of walleye occurred on Stager Lake and walleye fishing pressure was building at Winslow Lake.”

The initial goal of the walleye protection was to help a stunted bluegill population by cropping off some of those fish, and to establish a viable walleye population.

“Both of those goals have been met,” Johnson wrote.

The DNR stocked walleyes in Winslow Lake on a regular basis between 1979 and 1995.

In 1996, walleyes were considered self-sustaining and the stocking program ended.

The most recent survey of the status of the fishery revealed an walleye abundance of 7.3 fish per acre, which is considered a good to excellent fishery. The walleyes captured in the survey ranged from 6 to 28 inches and averaged 17.7. About 93% were 15 inches or larger, which is the legal size for harvest.

Bluegill was the most abundant species by number collected in the survey. The ’gills averaged 5.6 inches and ranged up to 10.

In response to the chronic slow growth rate of northern pike and lack of legally harvestable sizes of 24 inches or larger, the minimum size limit has been removed and the daily bag limit stands at five fish of any size, but only one may be 24 inches or longer.

Winslow Lake is located in the Paint River watershed in Iron County approximately 21 miles northwest of the city of Iron River. It has a maximum depth of 22 feet

The 7.8 miles of shoreline is mostly undeveloped with approximately one-third owned by the U.S. Forest Service. There are a couple dozen or so cottages along the southwestern basin of the lake.

Tote Creek, on the northern shore, and two smaller unnamed tributaries flow into Winslow Lake. The outlet is Winslow Creek, which is located in the southwest bay and flows to the North Branch of the Paint River. There is a five foot privately-owned dam at the outlet, which was rebuilt in the early 1980s

“The goal of fish management in Winslow Lake should strive for a balanced predator and prey fish populations, which will result in a healthy fish community for all anglers to enjoy,” Johnson wrote.

For walleyes, try drifting or trolling along the weedy breaklines with a crawler harness or cast a jig and crawler or jig and leech combo into the pockets.

Panfish will hit most live baits including waxies, leaf worms, and minnows. Look for weedbeds in 6 to 10 feet of water.

Public access is available at the southeast end of the lake off Federal Forest Road 2152.

On March 4, the Game Commission’s Northeast Regional Headquarters building in Dallas will be the site of another scoring session