Variety spices up the action on St. Joe’s Klinger Lake 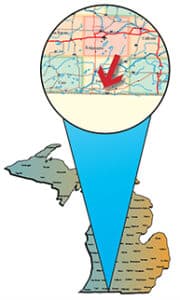 William Cowper’s poem “The Task” (1785) states that “… variety is the spice of life.” If that’s true, then St. Joseph County’s Klinger Lake is bursting with flavor as one of the better-than-average fishing lakes in southwestern Lower Michigan.

While Cowper’s character Jim coined the phrase by dating a different girl each week, anglers on Klinger Lake can taste the spice of fishing life by fishing for a different species each week – and staying busy for a couple months. The 822-acre relatively oval lake boasts strong natural populations of bluegills, largemouth, and smallmouth bass, and a robust, stocked population of walleyes. Add to that mix good numbers of northern pike and black crappies, and decent numbers of yellow perch and redear sunfish, and Klinger has enough variety to keep just about every angler licking his chops.

Located in extreme southern St. Joseph County just a stone’s throw from the Indiana/Michigan border in White Pigeon Township, Klinger Lake has a maximum depth of 72 feet, but over half is 10 feet deep or less. The lake has limited points and bays, but lots of contours and breaklines beneath the surface that hold fish.

The water level on Klinger is maintained by a dam at the head of Sherman Mill Creek in the northwest corner. Streams from Thompson and Tamarack lakes flow into Klinger Lake  from the northeast and a couple unnamed streams flow in from the south.

The bottom of Klinger Lake is mostly marl but there are some sandy areas along the shoreline. The lake features both emergent and submergent vegetation

According to a summary of the most recent survey of the fishery in Klinger Lake written by DNR fisheries biologist Kregg Smith, surveys date back at least to the 1960s. Stocking began as early as 1973 when 6,500 rainbow trout and 6,000 splake were released.

Follow-up surveys and discussions with anglers indicated that there was no long-term survival of either species so the stocking effort ended.

In 1985, after persistent encouragement from anglers, the DNR introduced walleyes to Klinger Lake and the move was a hit. The plants increased in the 1990s and since 2000 more than 250,000 walleye fingerlings have been planted in Klinger including 39,729 in 2016 and 41,595 in 2018. The prescription for management calls for stocking 50 walleyes per acre, every other year. (COVID nullified stocking last year.)

“Alternate years of stocking spring fingerling walleyes at high densities from 1990 to 2006 resulted in the creation of an acceptable walleye fishery in Klinger Lake,” Smith wrote.

The DNR’s most recent survey of Klinger showed a robust sport fishery. Survey nets captured good numbers of walleyes, averaging 20 inches and ranging up to 29. Bluegills and bass made up and lion’s share of the catch. ‘Gills ranged up to 9 inches, largemouth bass to 17, and smallies to 18. There also were light numbers of northern pike ranging between 16 and 36 inches in length.

“Relative abundance of northern pike, largemouth bass, and smallmouth bass may be low in the lake, but these species express fast growth and achieve lengths over time that are amenable to current management regulations, which also indicates a good balance in the fish community,” Smith wrote.

Fair numbers of good-sized redear sunfish also were collected in the survey.

“Redear sunfish were not stocked in Klinger Lake but have moved into the lake from Thompson Lake where they were first observed in the watershed,” Smith wrote in his summary. “Redear sunfish are larger in size than their nearest family members, the bluegill and pumpkinseed, and should provide an additional angling opportunity.

“Bluegill growth was good with preferred lengths of fish greater than seven inches available to anglers.”

There were also good numbers of rock bass to 11 inches. Perch numbers were on the low side, but they averaged 8 inches and ranged up to 11.

While fishing is good, Klinger’s not known for producing a ton of Master Angler fish. Since 2010 only three fish have been registered with the DNR program including a 10.3-inch pumpkinseed sunfish caught in 2011, a 15-inch brown bullhead caught in2012, and an 11.63-inch bluegill caught in 2018.

Klinger Lake is one of the first lakes in Michigan where largemouth bass virus was found back in 2001. Hence, anglers should take every precaution to not spread the virus to other lakes.

Don’t transfer fish or water (livewells, minnow buckets) from one lake to another and thoroughly clean boats, trailers, nets, and other equipment when traveling between different lakes and rivers. Use a light disinfectant such as a solution of one part chlorine bleach to 10 parts water (one gallon of bleach to 10 gallons of water).

There is good weed cover at the west end of the lake, south of the boat launch, and panfish anglers fare well there. Leaf worms and wax worms fished on small hooks under a bobber will catch fish.

The shallow, sand bar along the southeast shore is a good place to encounter smallmouth bass and walleye, especially in the evenings when they move in shallow to feed. The steep breaks on the west side of the lake also hold predators including bass, walleye, and pike.

Anglers troll crankbaits and crawler harnesses for walleyes or cast jigs tipped with crawlers or leeches.

For largemouth bass, topwater baits and spinnerbaits produce, especially in the mornings before the lake gets stirred up. Later in the day  try finesse tactics like Ned rigs and wacky-rigged rubber worms. Work them along the docks and breaks.

Smallies react favorably to tubebaits dragged across the sandy bottom.

Public access is available off  Crooked Creek Road at the southwest end of the lake.