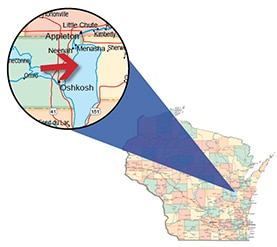 The DNR fisheries crew out of the Oshkosh office has conducted a Lake Winnebago bottom trawling assessment annually since 1986 to monitor the Winnebago system’s fishery. Area anglers are eager to learn the results each year.

The trawl provides critical information on year class strength of all fish species, monitoring trends in the forage base, and monitoring general population trends of game and non-game species.

The survey samples 46 GPS waypoints the first week of August, September, and October. Each sample involves towing a 27-foot wide trawl along the bottom for five minutes at 4 mph, sampling about 1-acre of area. Crew members captured a fair amount of adult fish, but the trawl is most effective at catching young of year – YOY – and yearlings.

The 2020 trawling results revealed several highlights, including record catch rates of YOY sheepshead and yellow perch, a strong crappie hatch, and a measurable walleye year class. Overall, there were 15 species of YOY fish sampled for a total of 79,835 YOY fish caught during the 2020 survey. It was noteworthy that 2020 had the highest catch rate for YOY bluegills (1.3/trawl) on record. For adult fish, there were 18 different species

The 2020 YOY walleye catch rate was 3.6 per trawl, just below the long-term average of 4.5 per trawl. Although 2020 produced a measurable year class, the catch rate was lower than expected based on high spring water levels. Spring Wolf River water levels are one of the main factors that drive year class strength. High spring water levels are crucial for providing suitable walleye spawning conditions by allowing adult fish access to flooded marsh habitat, providing adequate flows to keep eggs well aerated, and then flushing out newly hatched fry.

Like 2019, the initial snowmelt increased water levels, with discharge reaching 7,830 cubic feet per second at the New London gauge on March 17. Rain led to a second peak of 9,610 cfs in early April, resulting in good water levels and flow in the marshes. However, similar to 2018 and 2019, a mid-April cold front dropped water temperatures from 51.3°F on April 8 to 39.9°F on April 15. Peak walleye spawning often occurs in the first two weeks of April on the Wolf River; it is likely walleye spawning was underway before the cold front. Therefore, despite optimal water levels, the cold front likely created less optimal conditions for egg development and hatching success. In addition, lower water temperatures can lead to lower zooplankton abundance, which walleye fry need for food to survive. Although there was not a strong year class in 2020, measurable year classes from 2017-20 should help contribute to a strong adult population.

There were two YOY sauger captured. Natural reproduction continues to be limited. Adult sauger numbers have continued to fall since the Sauger Rehabilitation Program ended in 2010. That program was conducted from 2001-10 when rock reefs were installed on the north end of the lake to bolster spawning habitat, stocking was conducted (7.9 million fry, 10,000 fingerlings, and 6,576 extended growth fingerlings), and a zero-bag limit was put in place. The goal was to enhance spawning habitat and increase adult sauger numbers to increase natural reproduction. Although the project did increase adult numbers from 0.2 per trawl in 2001 to 2.6 per trawl in 2009, natural reproduction continues to be limited. Adult sauger catch rates have decreased (0.3 per trawl in 2020) to similar catch rates observed before the rehabilitation program.

The 2020 trawl indicated a record year class for yellow perch. The catch rate of 13.8 YOY per trawl was the highest on record, and well above the long-term average of 2.1 per trawl. Above-average year classes were also produced in 2019 (4.2 per trawl) and 2018 (3.5 per trawl). Anglers will welcome these recent year classes following a six-year stretch of poor recruitment between 2012-17. If the 2020 year class survives well into older ages, these fish will complement the good 2018 and 2019 year classes to provide an excellent perch fishery over the next few years.

The 2020 crappie hatch was strong at 13.9 YOY per trawl, the second-highest catch rate on record; well above the 3.2 per trawl long-term average. The 2016 record year class (24.1 YOY per trawl) still dominates the adult size structure with fish of 9 to 11 inches. Although the 2016 year class has begun to fade, anglers still had some success in 2020, particularly in bays during the spring.