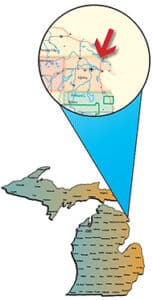 Most anglers target yellow perch and smallmouth bass when they head to Alpena County’s Long Lake, but anglers also catch good numbers of walleyes, panfish, northern pike, and even some healthy bullheads.

A peek at recent Master Angler entries backs that up. Between 2016 and 2019 no fewer than nine fish caught in Long Lake were entered into the program including three yellow perch ranging between 14 and 14.5 inches, two bullhead 14.75 and 16 inches, a 14.5-inch crappie, an 11.5-inch bluegill, a 9-inch pumpkinseed sunfish, and a 22.88-inch smallmouth bass.

Long Lake is seven miles north of Alpena and a couple miles inland from Lake Huron. It covers 5,342 acres and has a maximum depth of 25 feet. Long Lake is approximately nine miles long and one mile wide. It’s cut nearly in half by the county line, with the north half resting in Presque Isle County and the south half in Alpena County.

Several creeks, including Shuberts, Clinton, Mindack, Fitzgerald, and Long Lake Park enter the lake and most are frequented by game fish. Long Lake Creek flows out the south end of Long Lake and eventually into Lake Huron.

Public access is available at several spots around the lake, but the main site is located on the western shore off Long Lake Road. It features a hard-surfaced ramp with sufficient water depth to accommodate large watercraft, and parking for 10 vehicles.

The shoreline of Long Lake is mostly developed with year-round homes. The bottom is comprised of mainly sand and gravel in the near-shore areas and marl and muck in deeper water. Aquatic vegetation is sparse with beds of rushes found in some areas along shore.

The relatively shallow depth of Long Lake, along with regular exposure to strong winds coming off Lake Huron, results in nearly continual mixing of the water. A thermocline rarely develops, and water temperature is relatively stable.

Long Lake has a deep history of management dating back more than 100 years. Stocking began on Long Lake in 1910 and has been conducted by both state and private entities. Lake trout, largemouth bass, smallmouth bass, crappies, rock bass, sunfish, perch, pike, and walleyes have all been planted in Long Lake at one time or another over the years.

“MDNR evaluations of these stocking programs as well as examination of wild production demonstrated that juvenile walleye numbers (age-0 and age-1 fish) increased during this time period, as had the numbers of adult walleye observed through fall evaluations,” wrote DNR Fisheries Supervisor Tim Cwalinski in a report following the most recent surveys of the lake. “Stocking was probably a significant factor in these increases; however, wild walleye production also was significant at times, and contributed to one of the bigger year-classes.”

In the most recent netting survey of the lake, biologists collected 14 species of fish.

Smallmouth bass, walleye and northern pike dominated the predator side of the catch. Smallies ranged up to 20 inches and averaged a respectable 15. In fact, nearly 66% of the catch was 14 inches or larger. Walleyes ranged up to 27 inches and averaged 17 with a whopping 86% over the 15-inch minimum size limit. Northerns ran up to 40 inches, but just 35% were 24 inches or larger.

“Smallmouth bass provide for a quality fishing experience in Long Lake,” Cwalinski wrote. “Walleyes have been able to sustain themselves primarily through natural reproduction. Populations, however, naturally have fluctuated for reasons that are not totally understood. Other northern inland lakes in Michigan have seen depressed levels of walleye reproduction following mussel invasion.”

For smallmouths, try drifting crawler harnesses or crayfish along the boulders at an area on the east side of the lake known by locals as the “cook stove.”

The best perch bite usually occurs during the winter. Anglers who target the deepest areas of the lake with perch rigs baited with minnows usually catch decent numbers of yellowbellies.

Walleye anglers catch good numbers of fish in the summer. Try trolling crawler harnesses along the breaklines at the south end of the lake, and don’t be afraid to hit the “cook stove,” either, as walleyes school up in the boulders along with the smallmouth bass.