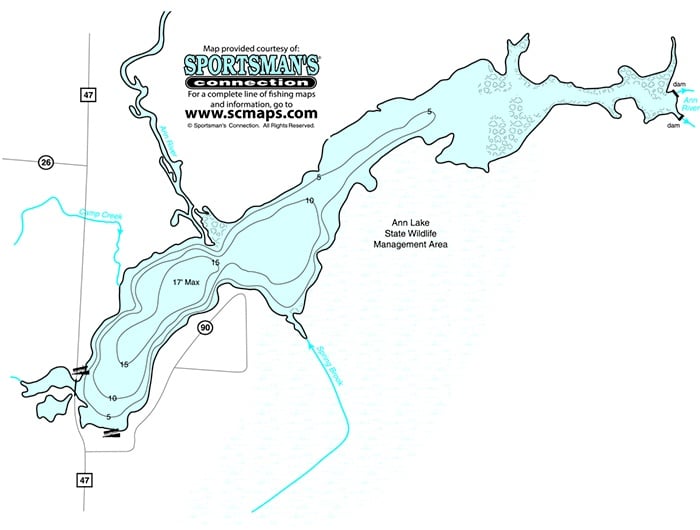 A plan for Ann: Fish the vegetation for panfish, bass

The DNR hasn’t been able to conduct a standard survey of Kanabec County’s Ann Lake in seven years. But if it had, it’s likely the results would be about the same as they always have been.

Ann is an exceptional panfish lake – has been for years. It’s always been noted for its ability to consistently produce good numbers of bluegills and crappies that run quite nice in the size department as well.

The fishery also has an improving largemouth bass population and plenty of northern pike. Walleyes have struggled to become established in Ann, but there are some available.

“We haven’t been out there since 2015, but anecdotally, it’s the same old story: Ann is a good panfish lake,” said Heath Weaver, DNR Fisheries specialist in Hinckley. “They reproduce consistently, grow quickly, and the lake never seems to have those bottlenecks or gaps in (panfish) year-classes.”

The system seems to have all the right components for bluegills and crappies to thrive. Ann is a relatively shallow lake, it’s rich with vegetation, and it’s very fertile.

According to Mike Walbridge, of Jerry’s Sport and Bait Shop in Mora, it’s those aquatic plants that are key to catching panfish on Ann, and it doesn’t seem to matter what time of the year it is.

Generally, anglers should expect good numbers of 8-inch bluegills with some bigger fish in the mix. Crappies tend to average about 10 inches in length, but fish up to 12 inches aren’t out of the question.

“It seems like Ann has always had nice sunfish and crappies in it,” Walbridge said. “You’ll want to fish the weedlines for both year-round.”

The last time the DNR electrofished Ann to get a handle on its largemouth bass population also occurred in 2015. Those results were somewhat impressive compared with results from previous shocking efforts.

An average of 58 bass per hour were sampled, and that included good numbers of quality fish. It was a definite indication that Ann Lake’s largemouth bass numbers are growing.

“I can remember catching three or four a night in past years,” Weaver said. “Based on electrofishing results, the lake’s bass population has expanded.”

Anglers seem to have figured out that Ann is now a pretty good bass fishery as well. Walbridge said the lake holds some of the nicer largemouth you’ll find locally.

“I’d say the size of the bass in Ann is above-average for the area,” he said. “There are some definite 5-pound fish in there and decent numbers. It has really nice bass in it.”

There shouldn’t be any problem catching northern pike on Ann. Although the majority of these fish tend to run less than 24 inches in length, the lake does give up the occasional pike over 30 inches.

Walbridge noted that if you want to catch pike to fry or pickle, Ann is a safe bet. But he added that it does hold some quality fish as well, typically topping out on the large end at 35 inches or so.

Walleye fry are stocked in Ann during even-numbered years, but natural reproduction also plays a role in its walleye numbers. That was quite evident in 2017.

The lake was electrofished at night in October 2017 to determine the extent of natural reproduction. A catch rate of 108 walleyes less than 7 inches – per hour – were sampled.

Despite the stocking of multiple strains of walleyes in the past 25 years, genetic analysis found that the 2017 year-class was naturally produced.

“If they made it through, those fish should be about 16 inches now,” Weaver said. “They have good growth rates and a lot of forage – perch, shiners, and other minnows. They should be maturing.”