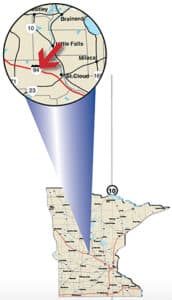 Two Rivers Lake is located south of Holdingford in Stearns County. Although the lake is just 575 acres in size, anglers throughout central Minnesota are aware of its ability to produce walleyes and crappies year after year.

The walleye population in Two Rivers is maintained through annual fingerling stocking. The DNR stocks it every other year, while the local lake association adds fish during the “off” years. This cooperative effort adds up to a healthy walleye population.

Crappies have always done well in the lake. Two Rivers seems to have the right physical characteristics to consistently kick out strong year-classes of fish. Despite heavy fishing pressure for them at times, the lake keeps reloading with crappies.

“You always hear about people catching walleyes and crappies out there. It’s a consistent producer of both,” said Joe Stewig, DNR Fisheries supervisor in Sauk Rapids. “Walleye catch rates (in surveys) are fairly consistent, and Two Rivers is well known as a crappie producer.”

During a 2019 DNR lake assessment, the catch rates for walleyes were similar to those in 2014 and in line with long-term averages. Walleyes up to 29 inches were sampled, as were seven year-classes. The bulk of the fish were around 11 inches long. Those were walleyes stocked in 2017, which appear to have taken well to the lake. Heading into this walleye-fishing season, anglers should find plenty of them, most of which are now about 15 to 16 inches long.

“It’s one of the better walleye lakes in this area, especially early in the year and during the winter,” said Rex Campbell, owner of Nancy’s Bait and Tackle in nearby Grey Eagle. “They’ll be shallow in the spring and you’ll catch a nice variety of sizes. Walleyes tend to hold up well in that lake.”

While Two Rivers crappies aren’t of the dinner plate variety, they cycle consistently, almost always providing an abundance of eating-size fish or a group that’s close to the 10-inch mark.

For example, crappies up to 12 inches were sampled in the 2019 survey, but most measured between 6 and 8 inches in length. If given the opportunity, those fish should be pushing 10 to 12 inches in another year.

“Two Rivers has always been a good crappie lake, and the current population looks good as well,” Stewig said. “Numbers were through the roof in 2019 – about two to three times higher than most lakes like it.”

Campbell also acknowledged that Two Rivers is an “exceptional” crappie lake. He noted that anglers this past winter were starting to catch more of the fish approaching 9 inches in length, along with plenty of smaller fish in the mix.

Although not talked about nearly as much, the lake also provides decent bass-fishing opportunities. It holds both largemouth and smallmouth bass, with a slight edge to the smallmouths as far as overall numbers.

Daytime electrofishing efforts by the DNR in 2019 didn’t yield high numbers of bass, but that’s likely due to the fact that nighttime electrofishing tends to be more accurate. Even so, largemouths and smallmouths over 17 inches were sampled.

“There are more bass in the lake than the electrofishing reflected,” Stewig said.

Northern pike numbers are at an all-time high, based on the 2019 survey. Pike up to 30 inches were measured, and they averaged 23 inches long and about 2.7 pounds.

Bluegill numbers have historically been low, and that trend continues. There wasn’t a bluegill sampled over 8 inches during the last survey. Anglers should expect to sort through small fish to find some to keep.